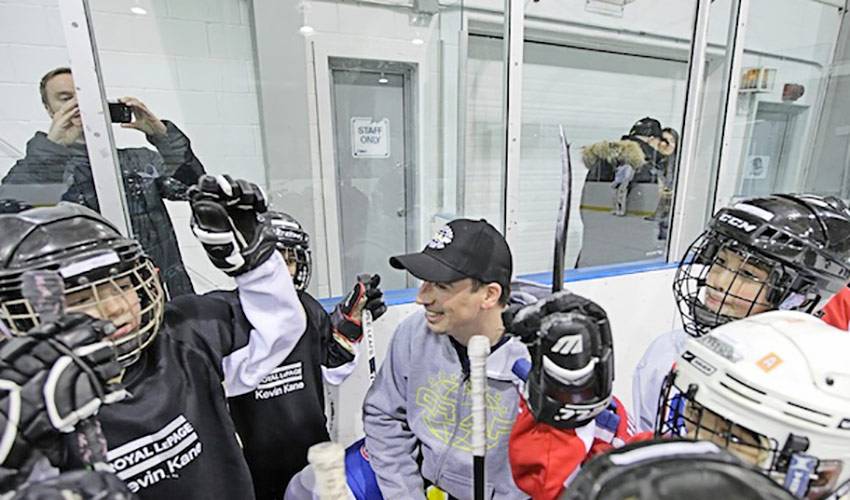 Every minor hockey player dreams of one day suiting up against the best players in the world, in front of thousands of fans, at the highest level, so you can imagine the excitement and surprise a minor hockey team would experience if they got a chance to take to the ice with NHL Players.

For the past few months, NHL players have been doing just that - showing up unannounced at minor hockey practices in small towns and big cities, surprising youth teams and taking the time to practice with them, while at the same time passing along tips, pointers and stories about being a young player and how to get the most out of their hockey experience. The majority of the visits involved players returning to their hometowns to give back to the communities and arenas they they got their start in.

This past Friday, Carolina Hurricanes center Tim Brent showed up to a Hespeler Shamrocks atom team practice. This marked the 100th time that an NHLPA member has made a surprise appearance at a minor hockey practice. This was a great milestone of giving back by the players but also held special significance for Brent, as he was born and raised in Hespeler, ON, is proud of his hometown, and supports the local community on an ongoing basis.

“Being on the ice with these young players is so much fun. Being back on a rink you grew up playing on is a special feeling. I feel like the biggest kid out here." - Tim Brent

Brent is just one of many NHLPA members who have taken part in these practices visits, adding to the long list of community and charitable initiatives that the members of the NHLPA consistently support. As the owner-imposed lockout continues, players will continue to participate in local minor hockey team practices as a way to give back to fans unable to watch season games.


“We’re big fans of the game too,” explains Tim Brent, “we hope to play soon but until then, we’ll do as much for fans as we can.”

Young players aren’t the only ones enjoying these surprise visits. The visits have been the first chance that many of the parents have had to interact and meet an NHL player firsthand as well.

"I never got an opportunity like this when I was a young player. It’s great these guys are doing this for the kids," said the father of one young player.

Tomas Kaberle (Montreal Canadiens), who was lucky enough to grow up around professional hockey players (his father played for the Czechoslovakian national team in the 1970’s & 80’s) took part in the 99th surprise visit this past Friday morning in Mimico, ON with David Clarkson (New Jersey Devils).

“Being around skilled players makes you want to be better and it’s a lot of fun to be on this side of it,” said Clarkson, who grew up in the Greater Toronto area. “Working with the kids, it reminds you why the game is so fun to share at any level.”

Players have been using the hashtag #foundaplacetoskate on Twitter to share their surprise visits with each other and their followers. See their tweets and photos here.

Other Articles on Surprise Practice Visits: