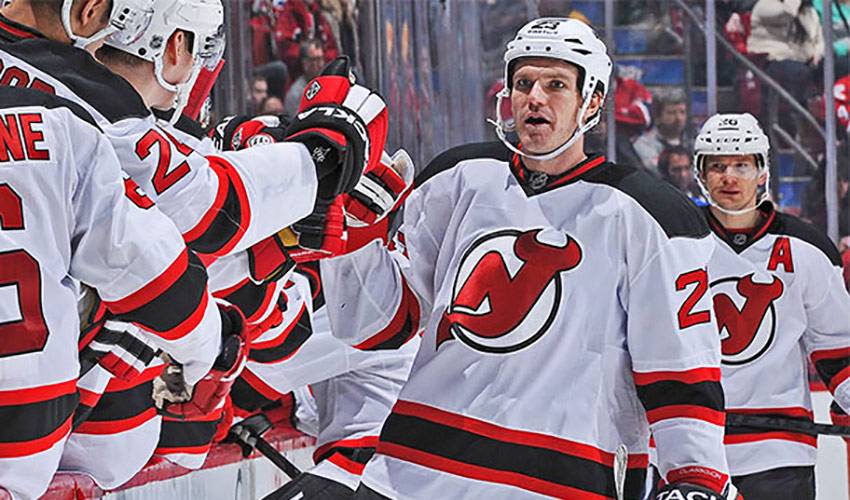 Whether it’s playing a leading role in New Jersey these days or engaging in a spirited game of mini sticks with his brother back in their younger days, David Clarkson can never seem to get enough of the good, old hockey game.

He’s been banging in rebounds, wreaking havoc in the offensive zone and powering his way into prime scoring position on a nightly basis in 2012-13. It wasn’t so long ago that Clarkson, off to the best start of his career, offensively speaking, having netted nine goals and 15 points after 13 games with the Devils, was doing pretty much the same thing, albeit without two points on the line. Back then, though, his scoring touch wasn’t always picture perfect, so to speak. “I can’t say my dad was always thrilled when he came after work to find out what happened after we played mini sticks in the basement,” said Doug Clarkson, David’s younger brother, who plays for the Trenton Titans of the East Coast Hockey League. “I can recall a few occasions where some of his cherished Toronto Maple Leafs memorabilia might have been damaged. I seem to remember the glass being broken on a few pictures.” The Clarkson brothers were typical siblings, competitive and at times, combative with one another. But even when they would have the occasional scrap, hockey always quickly drew them back together. “We’d fight a fair bit, but we were always close,” recalled Doug. “Even if we battled, we’d be right back outside playing in this parking lot right next to the house that was always empty. We’d be out there for hours.” While their respective careers have taken different paths, the brothers have maintained their close relationship. Doug continues to keep tabs on his brother throughout David’s NHL career, including his impressive start to this campaign. “I’m not really surprised that David’s doing this well,” offered Doug, who also played his junior hockey with the Ontario Hockey League’s Kitchener Rangers. “If you look back at his career, he’s been a good point guy. He can play rough and tough, but he can also score, too.” Developing into a well-rounded player took root for David well before his NHL days. “I think confidence plays a huge part in how you view your ability to contribute,” said the veteran of nearly 400 NHL regular season games. “Whether it’s a coach’s belief in what you can do, working hard in the off-season to improve every aspect of your game, you always strive to be good in every skill set.” Gone are the days of tentative play and second guessing. “I’m not as worried about making a pass that I might have been in the past,” asserted David, who recently arranged a donation of 50 new sets of hockey equipment through the NHL Players’ Association’s Goals and Dreams fund. “I think the lockout, as strange as it may seem, helped me prepare for this year. I worked at getting stronger and I worked on my skating and everything else. I wanted to be counted on defensively, too.” That commitment to self-improvement has paid off not only for David, but for a Devils team bent on erasing the disappointment of losing in last year’s Stanley Cup Finals to the Los Angeles Kings. It’s something that still stings to this day. “That’s tough, getting to that point and not winning,” admitted the undrafted 28-year-old, who launched his big-league career in 2006-07. “It’s hard to accept. You wonder if you’ll ever get that chance again.” David’s doing his part to make sure the Devils get that opportunity. “My linemates, whether it’s Adam Henrique, Travis Zajac or Patrik Elias, I wouldn’t be having the success I’ve had without them. They are great players. You can always count on them. Our whole team has bought into the system that has been implemented by the coaching staff. Hopefully, we keep it going.” Doug knows just what to expect from his brother both on and off the ice. “He wants to get better and he wants to do whatever he can to help the team," he said. “But when I think of David, the first thing that comes to mind is what a good guy he is. His charity (Clarky’s Kids, helping families deal with childhood cancer) in Kitchener has continued to grow over the years and it’s very important to him. He’s very grateful to be in the position he is. I don’t think there’s been one game where he hasn’t called my dad to check in and get his thoughts on how he did.” The reviews, especially this year, are no doubt glowing. “I’d be lying to you if I said I wasn’t having fun,” said David. “It’s been great. The team is doing well. We’re all happy with the way things have gone so far. I’m lucky to have so much support from so many people.” A list that includes his former mini stick partner, a fellow player and most importantly, a proud brother.