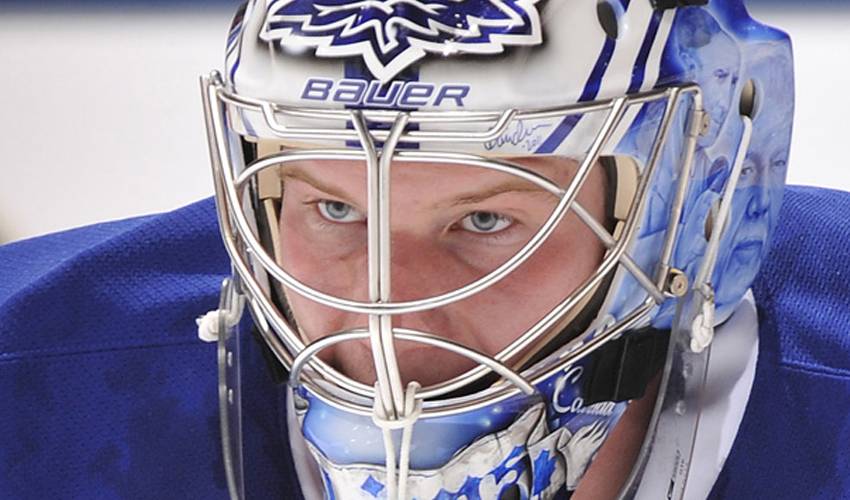 , the man behind the mask for the Original Six squad, will have come during the off-season.James ReimerToronto Maple Leafs' fans can rest easy. It appears the biggest loss in 2011 for

He made quite a splash in his rookie NHL campaign of 2010-11, going from relative anonymity to starting goaltender for the Maple Leafs, while becoming a fanfavourite over his 37 appearances.

Sporting a record of 20 wins and 10 losses for Toronto last season, the 23-year-old Reimer is more than ready to play his part in delivering the organization a playoff berth in 2011-12.

In fact, his mission has already begun.

“I'm really excited,” said the native of Arborg, Manitoba, who sported three shutouts and a solid 2.60 goals against average in 2010-11. “It was a long summer, too long, really. I'm looking forward to getting the seasonunderway.”

It will be a lighter, stronger Reimer standing in the crease.

overall) selection of the Maple Leafs in the 2006 NHL Entry Draft. “I suppose logic states that when you lose weight, you're lighter and quicker. I ate healthier, made some better decisions in terms of eating right and the pounds came off.”th“I dropped 20 pounds over the summer,” offered the fourth round (99

His dedication to perfecting his game, however, hasn't lost any focus.

“I always hoped I'd have the opportunity to prove that I could play at the NHL level, but I didn't really expect things to unfold as they did last year,” noted Reimer, who played with the South Carolina Stingrays and Reading Royals of the ECHL, as well as the Toronto Marlies of the American Hockey League, named the most valuable player of the ECHL playoffs, as the Stingrays won the Kelly Cup in 2009. “I feel very blessed. It was an unbelievable year.”

The soft-spoken backstopper made plenty of headlines in 2010-11, but he wasn't interested in reading or hearing about the Leafs' fortunes in media circles.

“For myself, I don't read the newspapers or watch the sports stations,” said Reimer, who made his NHL debut on December 20, 2010 against the Atlanta Thrashers, getting his first start against the Ottawa Senators on January 1, a 5–1 win and 32-save performance. “If I am watching a sports show, I'll turn the channel whenever anything comes on about us.”{{QUOTE}}

Reimer's sole focus is on making the Leafs a playoff contender in the Eastern Conference.

“I'm my harshest critic,” said the goaltender, who recorded 27 saves and picked up his first career NHL shutout against the Carolina Hurricanes on February 3. “I worry about looking out for my teammates. I don't ever want to let them down. That's the worst feeling you can have.”

Despite his success, Reimer points out the impact of others on his rise to prominence, including his father.

“My dad, he's a hard-working guy,” said Reimer, who has earned the nicknames Optimus Reim and The Statue. “The way he treated us, the way he treated my mother and how hard he worked, that's something I'm truly grateful for. (Leafs goaltending coach) FrancoisAllaire, he's been huge, too. He really perfected my game and showed me how positioning can really make a major difference, how you can be ready to make the first save and then be ready, if need be, to make a second save. With his help, I don't feel like a fish out of water.”

Reimer also has plenty of praise for a former teammate and respected NHL veteran.

“J.S. Giguere, he had a huge impact on me,” said Reimer, of the 34-year-old netminder, who now plays for the Colorado Avalanche. “I learned so much from him both on and off the ice, things like how to handle media pressure and other aspects of the game.”

Reimer, who idolized soon-to-be inducted Hall of Fame of Fame goaltender Eddie Belfour, is ready to take on the challenges that come with expectation.

“I had a good summer, spending time with my wife and her family in British Columbia, getting back to home to see my parents,” he said. “But now, I'm ready to play and I'm really thrilled about the upcoming season.”

There's one thing in particular, though, Reimer hopes he doesn't have to contend with when the campaign gets underway.

“One thing that really gets to me is having to look into my teammates' eyes after a game, one that we've lost, and I know I could have done more. I don't like that feeling at all.”

If last year is any indication of what's in store for Reimer, those situations will be few and far between.