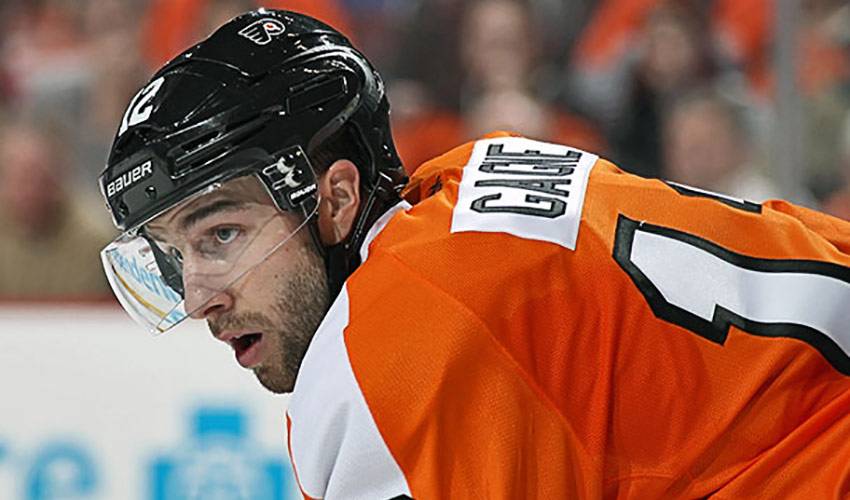 There were tears, cheers and a few fears before the puck dropped in his return to Philadelphia, but Simon Gagne fought through the emotions to have one of his most memorable NHL games.

It was a trade that saw him move from Los Angeles back to the Philadelphia and the Flyers, the team that drafted him 22nd overall in 1998, and the place where he played his first 10 NHL seasons. For Gagne, it was the ideal scenario. “When I found out, I was so nervous, like I was playing my first NHL game all over again,” said the Sainte-Foy, Quebec, native. “Everything happened so quickly after I found out. I had a long flight, a red-eye, to Philadelphia. I just couldn’t fall asleep on the plane. There were a lot of things that were going through my mind.” There were also a lot of well-wishers. “It was crazy,” recalled Gagne, of the influx of voicemails, text messages and emails. “I couldn’t keep up with them all. There were messages from the guys on Philly, past teammates, friends, family, doctors and other personnel on the Flyers’ staff that were there when I was the first time. I tried my best to get back to everyone, but I couldn’t stay on top of it all. I just know I feel very lucky to have people reach out like that.” The outpouring of support didn’t end there. Still battling butterflies prior to his first game back in black and orange, Gagne kept reminding himself to keep things simple when he stepped onto the ice against the Washington Capitals. His attempt to remain focused on his game-plan didn’t quite work out as he had envisioned. And that, he soon realized, wasn’t such a bad thing. “Even in warm-up, the fans gave me a really nice ovation,” Gagne remembered, who scored in the 4-1 win. “I saw some jerseys with my name and number on it and a few signs, too.” A little love in the City of Brotherly Love, including a highlight video of his first stint with the Flyers shown during the first period, took Gagne aback. “I guess I experienced a little bit of everything, emotionally,” admitted the 33-year-old. “My eyes were a little misty, but I was also really happy to be back here, in a place that holds a lot of great memories for me.” That list would include two team MVP awards and the game-winning goal in the third period of their 2010 Game Seven second round playoff matchup with the Boston Bruins, as Philadelphia erased a 3-0 series deficit. His career has also yielded gold medals with Team Canada at the 2002 Winter Olympics and two years later at the World Cup, as well as a Stanley Cup with the Kings in 2012. “Like any player, there have been ups and downs, but I feel lucky to have experienced a lot of great moments,” noted Gagne. “Winning the Cup, it’s something I will always cherish.” He feels the same way about his second turn with the Flyers. “Things didn’t work out the way I had hoped this year, but (Los Angeles President and GM) Dean Lombardi and (Vice President and Assistant GM) Ron Hextall showed a lot of class and respect in making the deal to send me back to Philly. It means a lot to be back here.” And as for his triumphant return, Gagne couldn’t have come up with a better script himself. “Not in my wildest dreams,” he said. “You always hope something like this goes well. I guess it did.” It did, indeed.