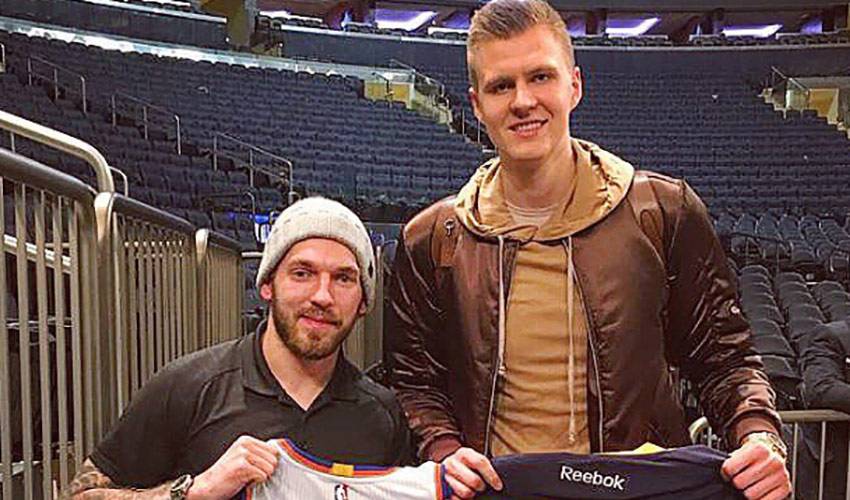 At 6-foot-2, Buffalo Sabres forward Girgensons had to look up – way up – when he recently met New York Knicks power forward Porzingis, who stands 7-foot-3.

Girgensons, in his fourth NHL season, caught up with the second-year basketball star at Madison Square Garden when the Sabres were in town to take on the Rangers in early January.

The pair chatted and exchanged jerseys, with Girgensons presenting his signed No. 28 Sabres jersey for an autographed No. 6 Knicks jersey from Porzingis.

Girgensons, 23, is still beaming after hanging out and getting his picture taken with his fellow countryman.

“It was awesome to meet him and get to know him,” said the forward, who is fifth among Latvian-born NHL players with 241 regular season games played. “Latvia doesn't have too many pro athletes here in North America, so it's nice to catch up with someone who is going through the same lifestyle.”

Porzingis, drafted fourth overall by the Knicks in 2015, has been a force on the court since joining the NBA ranks in 2015-16.

The 21-year-old finished second in voting to Karl-Anthony Towns for the 2016 NBA Rookie of the Year Award in a campaign that saw Porzingis average 14.3 points and 7.3 rebounds per game. He was also named to the NBA All-Rookie First Team.

Aside from the country they each call home, both Girgensons and Porzingis share something else in common: they’ve each won Latvia’s Rising Star of the Year honour. Girgensons was the 2013 recipient, while Porzingis was recognized in 2015.

Girgensons, who holds the distinction of being the highest drafted Latvian in NHL history (14th overall in 2012), knows both men can count on plenty of support from a country whose population hovers around the 2-million mark.

“We have crazy fans back home,” said the centreman, who scored his first NHL goal on October 2, 2013. “They are great. They will go on Twitter and give me notifications about when they see me play, or to wish me good luck.”

Which is precisely what Porzingis and Girgensons said to one another at the end of their conversation.

“He is just such a great athlete and he is fun to watch,” said Girgensons, of the highest drafted Latvian in NBA history. “You definitely admire anyone who makes it to big leagues coming from small countries.”