Brooks Orpik scored less than two minutes into overtime to give the defending Stanley Cup champions a 2-0 lead in the first-round series. 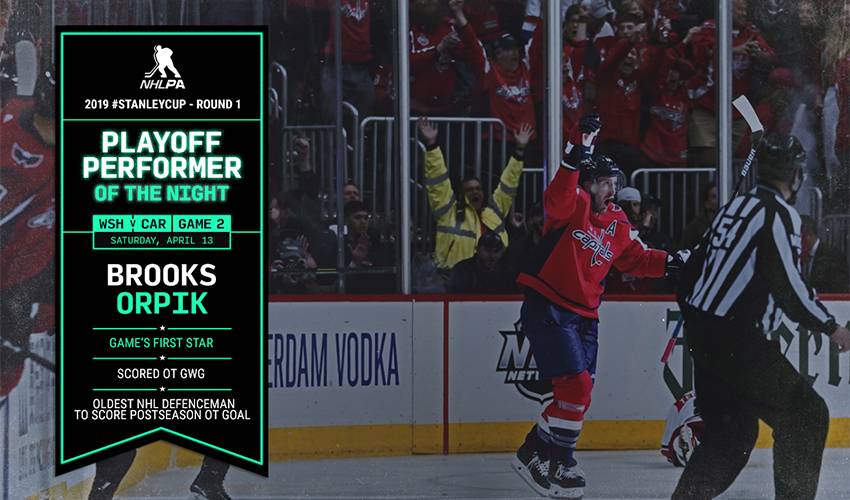 WASHINGTON — Brooks Orpik scored less than two minutes into overtime, Alex Ovechkin had two assists and the Washington Capitals beat the Carolina Hurricanes 4-3 on Saturday to give the defending Stanley Cup champions a 2-0 lead in the first-round series.

The tone was set for a wacky afternoon when a rat fell out of the ceiling during the Hurricanes' pregame soccer match. The weird vibes lasted long after the dead rat was removed — from a questionable ejection for a check to the head to a shot off one goalie's mask and another that went in off the other goalie's backside.

Ovechkin assisted on goals by Nicklas Backstrom and Tom Wilson to help put Washington up two games to none in a series for just the third time in the past five years. In perhaps his final NHL , Orpik scored 1:48 into the extra period of the Capitals' first overtime playoff game since they eliminated Pittsburgh in the second round a year ago.

Carolina goaltender Petr Mrazek rebounded from an inconsistent Game 1 to make 29 saves. He robbed Wilson with a glove stop with 1:37 left and made a left pad save on John Carlson in the final seconds of the third period to get it to overtime.

Just like Game 1, the Capitals jumped out to an early lead when Alex Ovechkin found Backstrom wide open for a tap-in 3:37 in. They made it 2-0 midway through the first period when Oshie drove past Justin Williams and Justin Faulk and lifted a backhander over Mrazek — kicking the stick out of Williams' hands for good measure.

Unlike Game 1, the Hurricanes didn't wait until the third period to begin their comeback. Wallmark deflected Jaccob Slavin's shot past Holtby, who was spun around on some skate-to-skate contact by Carolina's Saku Maenalanen. Capitals coach Todd Reirden challenged for goaltender interference, but the referees and NHL situation room deemed the contact outside the crease not to be significant enough to disallow the goal.

Things only got stranger in the second period. Less than a minute after exiting the penalty box, Hurricanes forward Micheal Ferland hit Nic Dowd while bent over and was given a five-minute match penalty for an illegal check to the head and ejected.

After officials conferred and decided to make it a five-minute major, coach Rod Brind'Amour screamed at referee Steve Kozari that it was a clean hit, pointing to his hip to emphasize Ferland made mostly hip to shoulder contact. Dowd left to go through concussion protocol but returned.

During the ensuing power play, a one-timer from Carlson hit Mrazek on the right side of his mask and knocked it off. Mrazek appeared to take a puck to the face and winced in pain but did not get pulled for concussion protocol and stayed in the game.

Mrazek made seven saves on the penalty kill of Ferland's major, which was cut short with 51 seconds remaining by a hooking penalty on Oshie. When Dowd high-sticked Dougie Hamilton, the Hurricanes got 1:07 of 5-on-3 power-play time but were thwarted by Holtby.

It took an unpredictable bounce for Carolina to tie it. After the puck deflected off the end wall, Aho banked it off Holtby's backside and in to end a 15-game goal drought dating to March 9.

Ovechkin carried the puck up ice and fed Wilson for the go-ahead goal with 11:05 left. But the Capitals' lead only lasted six minutes because with Dowd back in the box for high-sticking, Staal deflected Hamilton's shot past Holtby for Carolina's first power-play goal in the series.

Evgeny Kuznetsov found Orpik in the left faceoff circle for the winner. It's his fourth goal in 151 playoff games but his third game-winner.

Game 3 Monday night in Raleigh is the Hurricanes' first home playoff game since May 26, 2009.