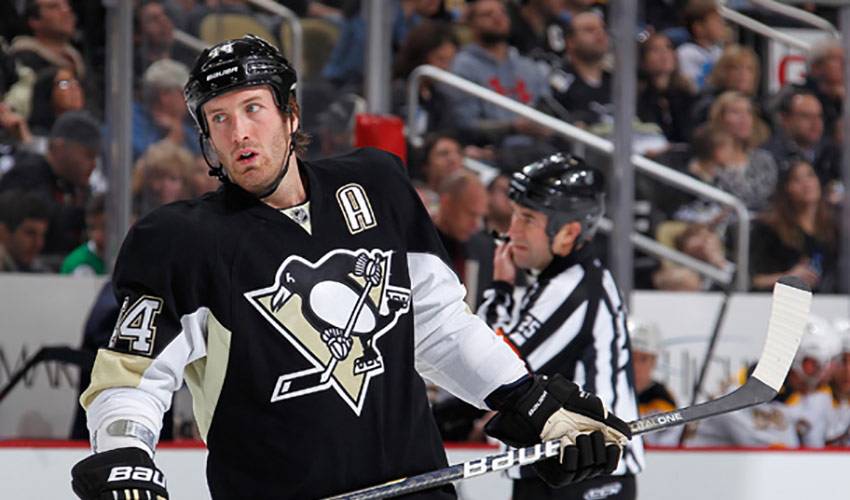 A nine-game winning streak might have the hockey world talking big about the Pittsburgh Penguins, but for Brooks Orpik and his teammates, it's a decidedly different story.

They are the NHL's hottest team these days, their most recent victory coming in the form of a decisive 5-2 home win against the defending Stanley Cup champion Boston Bruins.

Yet, in spite of their impressive run, the Penguins players are taking it all in stride.

“It's funny, the way we are approaching this,” said Orpik, Pittsburgh's alternate captain, of the string of victories that has the Pens knocking on the door of the Eastern Conference's top spot. “Our locker room is full of perfectionists. We're constantly looking at things from a, ‘What can we do better?'

When Orpik, who played three seasons for Boston College, winning the Hockey East post-season championship in 1999 and 2001, and the NCAA Men's Ice Hockey Championship with the Eagles in 2001, looks back over the past nine games, he and his teammates see the end result of their efforts.

But they are also quick to point out some good fortune that has come their way.{{QUOTE}}

“There were a handful of games over the stretch where we weren't at our best,” said the 18th overall selection of the Penguins in the 2000 NHL Entry Draft. “Maybe we didn't deserve to win those games, but it's been said that it's a sign of a good team when they find a way to get those two points.”

The nine-game streak started after a disappointing away loss to the Buffalo Sabres on February 19, a 6-2 humbling in an afternoon matchup.

A 2-0 home victory over the Rangers followed.

“That was a really bad loss in Buffalo,” said Orpik, who was born in San Francisco, but grew up in Amherst, New York. “I know I had a bad game. I think most of us did. It was one of those games where it was a good kick in the butt for us.”

Since the loss, the Penguins have steadily climbed the ladder in the East as the regular season enters the home stretch.

Orpik, who was part of Pittsburgh's 2009 Stanley Cup champion squad, is hopeful the Penguins can capitalize on their strong current form leading into the playoffs.

“We know we're chasing the Rangers,” offered Orpik, who received the Penguins Defensive Player of the Year Award for the 2009-10 campaign. “The last 20 games of the season are always key. The way you finish can determine a lot. You don't want to cruise into the playoffs. You want to head into the post-season playing your best hockey.”

Which is precisely what Pittsburgh, who has had to contend with several key injuries in 2011-12, is doing.

“We've had a lot of guys out,” noted Orpik, of a group that has been without star and captain Sidney Crosby for a vast majority of the campaign, while also losing other notable contributors. “Obviously, Sid has been out and on defence, Paul Martin, Kris Letang and Deryk Engelland have all missed games, too. Our minutes have all gone up, but we've strived to maintain consistency.

“We go over video a lot and it's broken down to about 50/50 in terms of what we do well and what we need to do better,” continued the 31-year-old. “The clips are never critical, they are insightful. You never take things personally. Confidence is so big and no one ever tries to take that away from you.”

While their winning streak has to end at some point, Orpik and his teammates are working just as hard outside of their actual games to ensure it lasts as long as possible.

“(Teammate) Richard Park came to me and said, ‘This has to be the most superstitious team I've ever seen.' There are a lot of guys who have superstitions. In fact, it might even go beyond that. We've had the same morning skate, the very same drills, over our win streak.”

A streak that has seen Orpik, who recorded his 100th career point by earning an assist on Evgeni Malkin's goal against Buffalo on December 17, 2011, and his fellow rearguards elevate their individual games.

“There is more pressure to perform, but guys have stepped up,” noted Orpik, who is nearing the 600 games-played mark. “That's been the story of our season.”