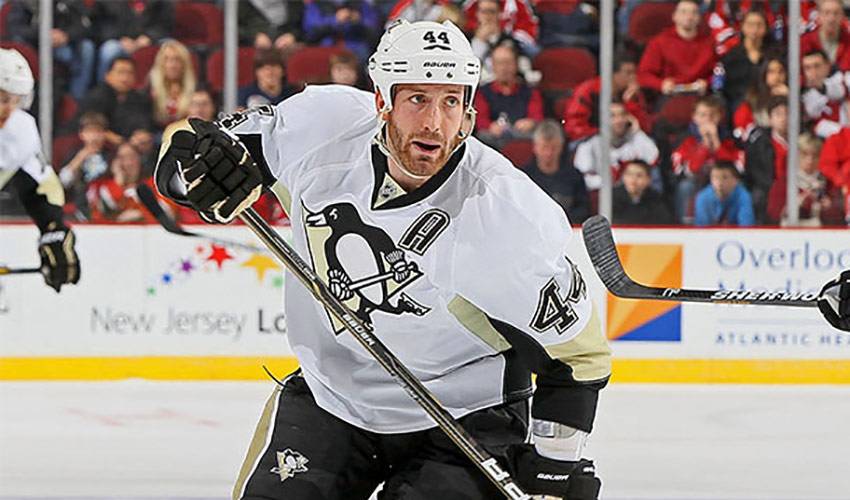 On a team that features a plethora of flash and finesse, Brooks Orpik brings dependability and strong defence to the Pittsburgh Penguins’ blueline, a savvy veteran closing in on 600 career games.

The 32-year-old, who won the Stanley Cup with the Pens in 2009, recently spoke with NHLPA.com and talked past, present and future, as well as league parity. We go ‘Between the Bluelines’ with Brooks Orpik: MAKING THE GRADE: “I still vividly recall my first NHL game and just how thrilling it was to be realizing your dream. In my first year, it was about, ‘What can I do to stay in the league?’ But as time went on, you began to feel more comfortable and confident in yourself. As you play longer, you understand the importance of taking care of your body. And you just can’t look too far ahead. It’s always about the small picture or you lose focus.” THE DEFENCE NEVER RESTS: “We’ve brought in a few new guys, but for the most part, it’s the same cast of guys. I think having Tomas Vokoun come in has been really great for us, along with Brandon Sutter and Tanner Glass. Vokoun has been a great fit with Marc-Andre (Fleury). He’s also played extremely well for us in net. Everyone here takes a lot of pride in working hard to keep the puck out of our net.” A WIN-WIN SITUATION: “The reality is that there are no easy games in this league and every team is capable of winning on any given night. That’s something you are especially reminded off in this shortened season. Every game matters and it seems as though teams that didn’t make the playoffs last year all improved. There are no easy games, so you have to be ready and at your best every night.” FOR THE LOVE OF THE GAME: “I always want to stay within the moment when I look at my career and where I am at. I had a couple of surgeries in the middle part of my career and I was able to come back at compete at the level I wanted. I enjoy playing the game and as the years have gone on, I’ve learned to recognize the things you need to do to stay at the top of your game. Your first goal is to make it. Then, you want to be counted on to make an impact. But I still love the game as much as I ever have.” SILVER LINING: “It was a major disappointment for us to lose in the first round to Philadelphia last year. All the guys were really pumped about getting going again. We had that chip on our shoulders and we all wanted to come out and have a year to remember. It was a short training camp, but you could see the focus and desire in everyone’s face.” The 18th overall selection in the 2000 Entry Draft, Orpik continues to be a rock-solid rearguard for a Pittsburgh team primarily known for their offensive flash. But, the San Francisco-born, New York-raised defenceman knows it will take a balanced approach to put Pittsburgh back in the Stanley Cup picture. “We’re very fortunate to have a lineup where every line is able to make an impact at a key point in the game,” said the Penguins Defensive Player of the Year in 2009-10. “You need that type of consistency to go far in the playoffs. With the new guys we brought in and the guys that have been here for awhile, we’re all on the same page as to what we need to do to succeed.”