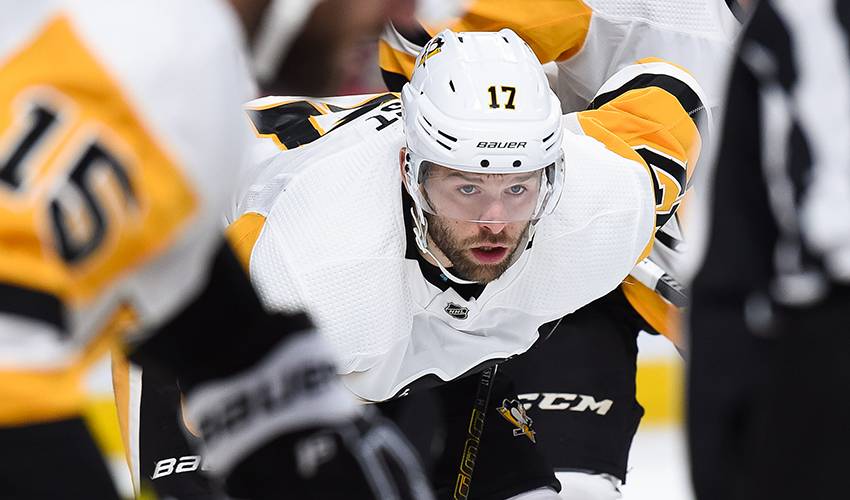 What’s a good way to gear up for the pressures of the Stanley Cup Playoffs? For Bryan Rust, it’s binge watching a wildly popular, Emmy Award-winning HBO series.

On a Sunday afternoon in Pittsburgh, three days before the Penguins take on the New York Islanders in Game 1 of their Eastern Conference First Round series, Rust and his fiancée, Kelsey Burton, are enjoying a quiet day together.

“The best way to relax before everything kicks into high gear is to just go with whatever comes up,” said Rust, who won back-to-back Cups with the Penguins in 2016 and 2017. “Right now, my fiancée and I are re-watching Game of Thrones before Season 8 comes out. We’ll dive into that today and have a nice, laid-back day together. It’s little things like that which helps to keep your mind off hockey. If you’re constantly worrying about it and focusing on it, that will drive you crazy.”

After a regular season that yielded a career-best 18 goals, the Michigan native will zone-in on the task at hand, specifically, looking to help the Penguins get by an upstart Islanders side that recorded 103 points in 2018-19.

Selected by Pittsburgh in the third round (80th overall) in the 2010 NHL Draft, Rust won’t be making any tweaks to his mental approach in the post-season.

“I try and keep my routine fairly consistent,” he said. “I do my best to stick to it. There are times during the regular season when you have to run an errand or something might come up, but when you get to the playoffs, all those things go to the back burner. You just focus on that routine.”

And in doing whatever it takes to get the win.

With 16 goals, including four game-winning tallies, in 58 career playoff games, Rust has stepped up with some timely post-season offensive contributions.

But it’s not just about putting up points for the right wing who spent four seasons at Notre Dame, winning the team's Unsung Hero Award as a senior.

“With my linemates, we would possess the puck in the offensive zone quite a bit,” offered Rust as to what would constitute a successful playoff performance. “We’d create a lot of scoring chances and not give up a lot of scoring chances. I think maybe blocking a few shots, getting some hits and doing all those little things at this time of the year can be huge.”

For one day, though, Rust put aside his personal Stanley Cup game plan to focus on a completely different ‘Game.’

“When the playoff are on, I’ll think about hockey up until I go to sleep,” offered Rust. “Once I wake up the next morning, I’m focused on the next game. Dwelling on a past game, good or bad, isn’t necessary and it isn’t going to help anything at all.”