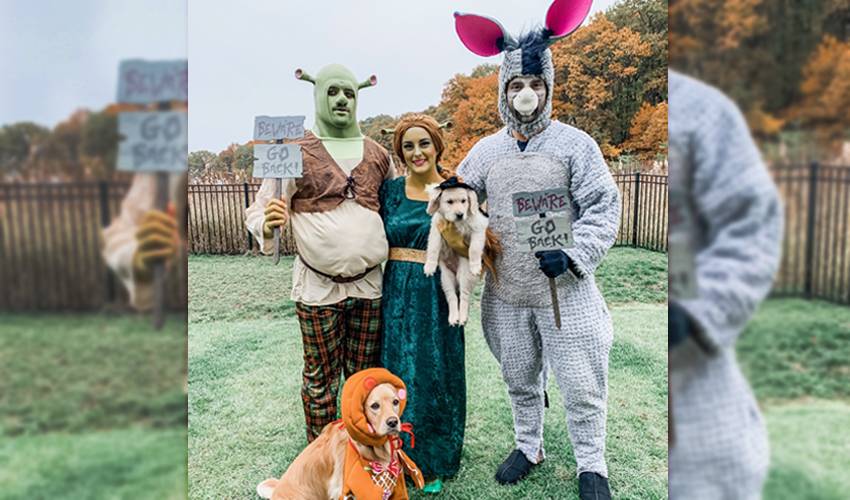 The spooky (and silly) pictures found on social media speak for themselves. If there were a Stanley Cup handed out for best Halloween costumes, Pittsburgh Penguins players and their significant others would definitely be a favourite to win it all.

Team Rust is proud to be part of the Penguins’ fright night festivities, and he's been known to do a great job.

Three years ago the Rusts decided to go with a team Mario Kart theme for the annual Penguins party.

This year, the couple has upped their game in impressive fashion.

“We figured it out,” Bryan told NHLPA.com ahead of the team’s Halloween party Oct. 30. “We put a lot of thought into it.”

“We’re going as Shrek and Fiona,” offered Kelsey. “We actually recruited one of the guys on the team, Zach Aston-Reese, to be our donkey. Then we have some dog costumes for our golden retrievers. Cooper is going to be Gingerbread Man, and Oliver is going to be Puss in Boots. We’re going pretty in-depth with this. We’ve got some prosthetics and a makeup artist coming. We can’t wait to see how it all turns out.”

The right wing might be wearing more ‘equipment’ than he does on the ice.

All of the effort, both (and we) agree, is definitely worth it.

One major part of the evening is Pittsburgh players keeping what they’re wearing a secret until everyone arrives.

“This is always a lot of fun,” said Bryan. “It’s kind of a good time for everybody to show their personalities, to let loose a little bit and have some fun.”

As for which teammate continues to raise the bar and come up with an unforgettable look, both Bryan and Kelsey selected a smooth-skating defenceman and alternate captain.

In 2016, the player went as Bill Turner from Pirates of the Caribbean, while his wife Catherine went as a mermaid.

“The Letangs always come up with something really cool,” said Bryan of Kris Letang and his wife, Catherine.

“Honestly, I have to give credit to the whole team,” praised Kelsey. “Everyone really gets into it, and there’s never a bad costume at all.”

Speaking of less-than-memorable Halloween costumes, the couple each has a somewhat embarrassing story to share.

Bryan’s tale dates back to before his teenage years, while Kelsey’s details the time she had to take one for the team.

“My favourite one, when I look back at the pictures, was when I was four or five,” started Bryan. “My mom dressed me up as a little lion. The most embarrassing one – I like to think I did a pretty good job not wearing anything too crazy – was when I may have dressed up as a schoolgirl. I was around 10 or 11, I think. I had a blonde wig and pigtails.”

“I grew up with two older brothers,” began Kelsey. “I think the one that sticks out for me in terms of cuteness was when I was this very, very large, stuffed clown, when I was little. You couldn’t even recognize me. My mom put so much stuffing in the clown costume that I don’t even think I could walk. My dad had to bring me around to every single house. As for the most embarrassing, I’m pretty sure one year that I had to dress up as a boy to be in a trio with my brothers. Since I was the youngest, I had no choice.”

Whatever look neighborhood kids opt for, trick or treaters visiting the Rust home will take home a unique-looking glove.

Spoiler alert: it’s not a hockey glove. But the candy-filled goodies are no doubt going to be a crowd pleaser with the kids.

“Outside of the team party, I get so excited giving out candy, and seeing all the great costumes,” offered Kelsey. “I like to get creative with the things we give out, not just your typical candy. Bryan and I took these surgical gloves and stuffed each finger of the glove with Rocket candies. We put a bunch of candies in the palm of the hand, tied it up and decorated it with stickers. It was fun for us to do.”

Which is what the couple says every time Halloween rolls around.

“I love the chance to dress up, act goofy, and let loose,” said ‘Shrek.’ “It’s all about having a little fun.”

“It’s having the chance to be creative,” noted ‘Fiona.’ “I always tell everyone on the team that we don’t want to know about or see the costumes until you walk in that night and see them all.”