May 22, 2018
By:
Chris Lomon
My Top 5
Francois BeaucheminRetirementAnaheim Ducks 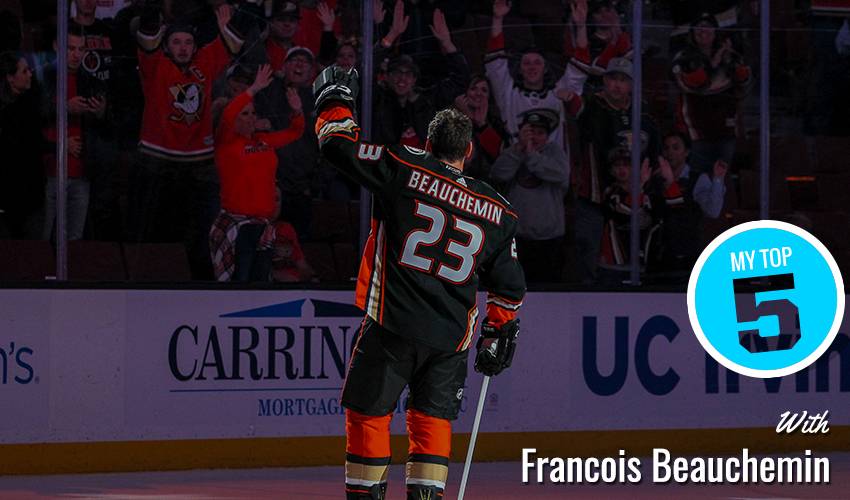 A veteran of 903 regular season NHL games, the Quebec native, who won the Stanley Cup in 2007 with the Ducks, Beauchemin played with Montreal, Columbus, Anaheim, Toronto and Colorado.

TOP THINGS ABOUT THE GAME BEAUCHEMIN WILL MISS THE MOST

“You miss the competitive side of the game. When you play hockey your whole life, you play to win every night, you compete hard and try to be the best player you can be out there – I’m sure that’s something all athletes miss when they decide to stop playing. Hockey has been your life since you were a kid, so that’s going to bring a different mindset now. But I’ve been watching the games and I really like what I see. The speed of the game and the skill that the young guys have right now is unbelievable. I’m retiring, but I’m becoming an even bigger fan of the game.”

“That’s one thing that everybody talks about and I’m sure I’m going to be the same. Again, when you play a sport like hockey, you are around your teammates almost every single day at practice, dinners on the road before games, and just hanging out – they are like your family. They are your brothers for nine months. Whoever I talk to, most of them say that’s one of the hardest things as well.”

“The road trips are always nice. But I’m planning a few trips of my own. Fishing trips and snowmobiling – those are going to be some of the new road trips now.”

“It’s always special to play when you have 20,000 screaming fans and you can feel the energy in the building. It gives you a boost to be better. It’s always nice to have people behind you and make you want to be the best player you can be.”

“I’d like to say thank you to the fans. I’ve always been a guy that’s worked hard every night and tried to do my best out there. I never really had many negative comments against me and the fans were always nice, cheering me up – that’s something you really appreciate as a player.”

Thank you fans, will forever remember this https://t.co/J8Hr4qzcMj

“I would like to thank my family for always being there for me. They say that when you’re happy at home, everything else is fine. For me, that’s definitely the case. My wife (Marie-Claude) and all the hockey wives – that’s a tough job to do. We have three kids and my wife had to basically raise them herself nine months out of the year. She did a great job and never complained. Our kids are happy, and now we will all be together.”

“Also, I’d like to say a special thank you to my dad for all the support over the years and all the travelling he did to see me play.”