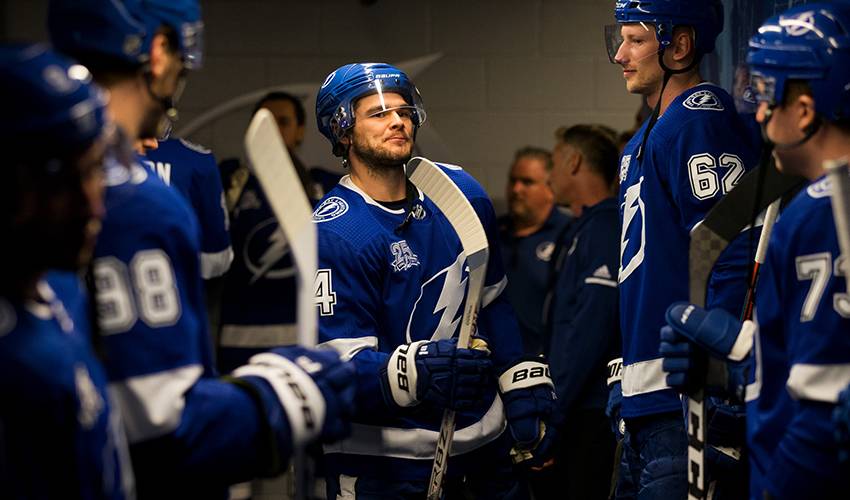 It was a few years ago during the annual Ferris State University alumni charity softball game when Kunitz, who played four seasons with the Bulldogs, reminded the school’s long-time bench boss that he hadn’t lost an ounce of his competitive spirit.

“Chris comes back pretty much every year for our alumni weekend,” started Daniels, the all-time winningest coach in Ferris State history, currently in his 26th season. “It’s a golf outing, but on the Friday night we have our alumni players play against the public safety officers from Big Rapids and Ferris State.

“It’s getting into the late innings of the softball game – it’s just a fun-type charity event – and Chris goes racing after this fly ball. The next thing you know, he leaves his feet, dives and makes the catch. At the time, I’m thinking, ‘What would his team think about this?’ But to me, that’s him to a tee. He wanted to win an alumni charity softball game. I think that really typifies him.”

Kunitz attended Ferris State from 1999 to 2003, where he helped lead the Bulldogs to the regional finals in 2003, in what was the school's first appearance in the NCAA tournament. That same year, he was selected as the Central Collegiate Hockey Association player of the year, earned All-America honours and was the runner-up for the Hobey Baker Award as the top player in U.S. collegiate hockey after a stellar 35-goal, 79-point season.

In four years at the Michigan-based university, Kunitz netted 20 or more goals three times and finished with 99 goals and 175 points in 152 game.

“He’s a very open and honest person,” said Daniels. “There’s no false pretense about him whatsoever. I guess if I had to pick one word that would describe him, it would be genuine.”

So, too, was Kunitz’s on-ice talent and will to win.

“Beyond the skill level, it was his competitive streak,” recalled Daniels. He is ultra-competitive. He’s mild-mannered and well-spoken off the ice, but in the competition arena, he’s just so competitive. He’s got a little bit of a mean streak to him, too. And I like that. It was a good mix. It was controlled. He’s got that little bit of meanness to him, which was a little surprising considering he’s so soft-spoken.”

Less than 50 games shy of 1,000 over an NHL career that has produced four (three with Pittsburgh, one with Anaheim) Cup triumphs, Kunitz, now with the Tampa Bay Lightning, is still impressing the man at the helm of Ferris State’s men’s hockey program.

“I really believed he could be an NHLer,” said Daniels. “Where I really started to believe that he could was his junior year here. It was evident through his senior year that he would sign an NHL contract (Kunitz inked a free agent deal with the Anaheim Ducks on April 1, 2003). I thought he could have a good NHL career. I was concerned a little bit about his size, but I knew he could take care of himself. He’s not timid whatsoever.”

How did Kunitz reach 951 NHL games?

“I think that really goes to his competitive nature,” noted Daniels. “He’s always taken good care of his body. Everyone is competitive on game night, but you have to take care of yourself 12 months out of the year and Chris has done that. The fact that he does that and combines it with being such a good family man is really wonderful.

“We were very fortunate to have Chris really be the flagship of our program,” he continued. “If we were to have one player be as successful as Chris has been with the Stanley Cups and the Olympic gold medal (Team Canada, 2014) – he is the perfect person. He is a great representative of what we want beyond hockey, in life and away from the arena.”

And perhaps even on the diamond.

“That moment just reminded me of what he’s all about,” said Daniels. “He’s the ultimate competitor. I thought, ‘Chris, what are you doing?’ But that’s him for you.”