A Good Ladd for the Thrashers 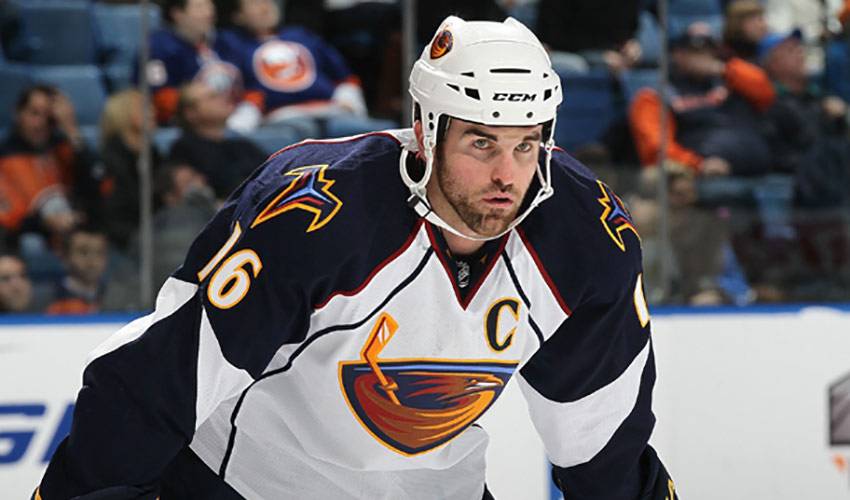 A World Junior gold medal. Two Stanley Cups with two teams. Being named captain of the Atlanta Thrashers. It might not have been the result of his own master plan, but Andrew Ladd isn't complaining one bit about how his NHL career has turned out.

For as much as he had dreamed about seeing his name engraved on hockey's most coveted team trophy and for all the times he spent hoping he'd have a prosperous hockey career, there's absolutely no way, admittedly, that Ladd, the pride of Maple Ridge, British Columbia, could have ever imagined things would pan out this way.

“I'm definitely happy with the way things have gone,” said the 25-year-old left-winger, who won the Stanley Cup with the Carolina Hurricanes in 2006 and the Chicago Blackhawks in 2010. “I was able to play with two great teams and win the Stanley Cup. Ever since you can remember, you dream of playing the game. But it's weird how it's worked out.”

He began his junior hockey career in the Junior A British Columbia Hockey League (BCHL) with the Coquitlam Express, before moving on to the major junior ranks of the Western Hockey League (WHL) with the Calgary Hitmen, after being dealt from the Vancouver Giants for Jamison Orr.

Ladd recorded 75 points in his rookie season, tops among first-year players, putting him 15th overall in league scoring. His plus/minus rating of plus-39 led the WHL, earning him the WHL Plus-Minus Award. In the off-season, he was selected in the first round, 4th overall by the Carolina Hurricanes in the 2004 NHL Entry Draft.

He turned pro after two seasons with the Hitmen in 2005–06, joining the Lowell Lock Monsters, the Hurricanes' American Hockey League (AHL) affiliate. Called up to the Hurricanes in November, Ladd skated in his NHL debut, but subsequently suffered a knee injury in December which sidelined him until February.

Ladd was assigned back to the Lowell Lock Monsters until March, but was recalled to join the Hurricanes for their playoff run. He recorded five points in 17 post-season games helping the Hurricanes to their first championship.

The following season, in 2006–07, Ladd solidified a roster spot with Carolina, but underwent an emergency appendectomy on December 14, 2006. He finished the campaign with 21 points in 65 games.

“I learned a lot from several players, but (former NHLPA member and long-time NHLer) Rod Brind'Amour was an unbelievable person and player when I was in Carolina,” said Ladd, who won the WHL Top Draft Prospect Award in 2004. “I was like a sponge, just soaking up everything he did in terms of his preparation and commitment in practice and the games. To me, he did everything right. He was a quiet guy, but he commanded a lot of respect. In terms of preparation, he's the best I've ever seen.”

During his third NHL season, Ladd was dealt to the Chicago Blackhawks at the trade deadline on February 26, 2008, in exchange for Tuomo Ruutu. He was reunited with three former minor hockey teammates, Troy Brouwer, Brent Seabrook and Colin Fraser, who all played together with the Pacific Vipers.

On July 1, 2010, in what was a salary-cap move, Ladd was dealt to the Atlanta Thrashers in exchange for defenceman Ivan Vishnevskiy and Atlanta's second-round choice in the 2011 NHL Entry Draft, joining Dustin Byfuglien, Ben Eager, and Brent Sopel, who had also been traded from the Blackhawks one week earlier.

“Playing in Chicago was a great time,” said the left-winger, who had six points during the ‘Hawks championship run. “We had a lot of fun playing the game together. You could see it in our team. We had a real blast.”

During the 2010-11 season, on November 18, Ladd was named as the captain of the Thrashers, with Byfuglien and TobiHe doesn't need to be reminded he's graduated from raw rookie to experienced veteran.

“I'm truly enjoying it,” said Ladd, who is in the midst of one of his best offensive campaigns. “I really didn't know what to expect coming to Atlanta. “I knew I'd be playing a bigger part. And I knew the guys we had would be committed to working hard. Everyone came into the season excited.

“It's a little different makeup than in Chicago,” he continued. “(Jonathan) Toews and (Patrick) Kane were superheroes in Chicago. On the same level, we don't have any superheroes here. ‘Buff' (Dustin
Byfuglien) has all the tools to be one. He's a huge talent.”

But it's not just Ladd and Byfuglien who have helped put the Thrashers in the playoff picture and battling for the Southeast Division lead.

Tough guy Eric Boulton recently netted his first career hat trick in a win over New Jersey, a moment Ladd and the rest of his teammates couldn't get enough of.

“He's a pretty funny guy, a lot of fun to be around,” said Ladd, who scored his first NHL hat trick on March 7, 2010. “The look on his face after he got his third goal was priceless. It was a great scene.”

Now, all Ladd has left to do is chart out the next big event in his hockey career.

“Well, I think it's pretty obvious what we'd like to do here,” he offered. “I've been very fortunate throughout my career.”

Not quite as Andrew Ladd might have planned, but better than he could have ever anticipated