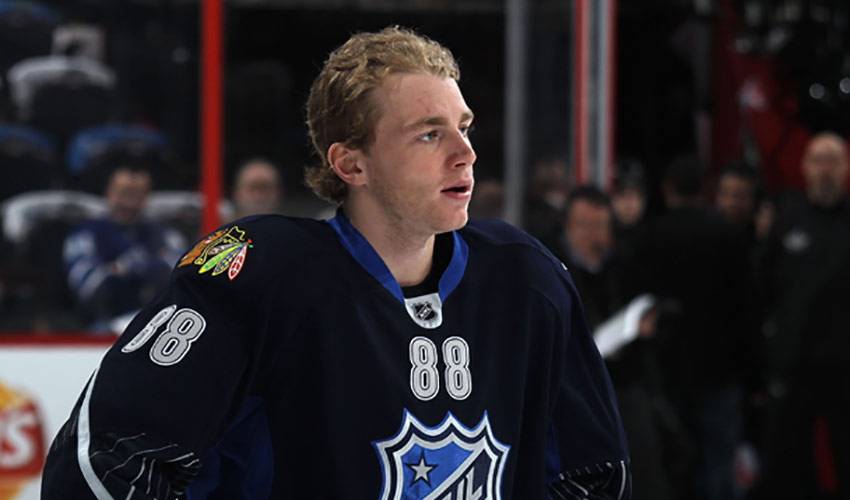 Participating in the NHL All-Star Game can mean many things for each player who suits up for the mid-season event. For Patrick Kane, it was, of all things, an invitation he wasn't expecting.

He's no stranger to skating alongside man of hockey's top talents, having played in the 2009 All-Star Game in Montreal. The native New Yorker is also familiar with success at the highest level, having won the 2009-10 Stanley Cup as a member of the Chicago Blackhawks.

Yet, when he heard his name called for the upcoming mid-season game that will be played in Carolina on January 30, Kane's reaction was one of genuine surprise.

“I wasn't really expecting to get my name called for the game, let alone be an assistant captain,” said Kane, the first overall selection of the Blackhawks in the 2007 NHL Entry Draft. “So I'm just going to soak it all in, have a fun weekend and really try to enjoy it. But it doesn't really change anything for me. I'm just happy to be going.”

And whoever gets Kane, the man who scored the Cup-winning goal against the Philadelphia Flyers, on their side, is going to be just as happy.

A new format for this year's festivities will see the conference versus conference approach replaced by a player draft, conducted by the All-Star players, who will then determine the rosters for each team.

Captains for each side (Nicklas Lidstrom and Eric Staal) will choose from a pool of players chosen by a combination that includes 6 players chosen through fan balloting. The change in the format is a joint effort by the NHLPA and the NHL.

While Kane is simply happy to be taking part in the festivities, he also admits there are a large number of players he would rather be lining up with, than against.

That list would include Tampa Bay Lightning standout Steven Stamkos, who will no doubt be an early pick for either Lidstrom or Staal.

“I got a chance to play against him in Junior and he was just a rookie, and you could just really tell how good he was going to be even back then,” said Kane, of Stamkos, who was the first overall choice of the Lightning one year after Kane was drafted. “So obviously you see some of the highlights, you can't really believe he scores all those goals from the wing on power play.

“Marty (St. Louis) does a great job setting him up and actually talking to Stamkos in the summer, he was saying he was probably the happiest guy in Tampa when Marty got re-signed. He's a fun player to watch. He's really explosive. Got a great shot and he's a hell of a player.”

Kane has certainly shone in his relatively young NHL career.

He helped play a major role in resurrecting the Blackhawks franchise.

He won the Calder Memorial Trophy as rookie of the year in 2008, was a U.S. Olympian and added his name to the Stanley Cup last year.

While an injury kept him out of the lineup for eight games in December, the right-winger is playing at an almost a point-per-game clip, as Chicago looks to repeat as league champions.

For a few days, though, Kane will relish the chance to hit the ice and showcase his skills against his fellow NHLPA members.

His only major wish? Don't be the final pick.

“I'm definitely sure you don't want to go last, kind of a tough situation,” admitted Kane. “But I've been talking to some of my teammates about it. I think me and Sharpy, Patrick Sharp, joking about it a lot, of maybe someone being the last pick. I think it's kind of a tough situation, but at the same time there are 600 other NHL players that aren't in the All Star game that you're still playing. So I guess you've got to take the positives from a bad situation.”

Facing off against teammates, new or old, doesn't present the same issues.

“I don't know,” offered Kane. “It's a fun weekend overall. So I think no matter if I play against them or with them, you know, we're just going to have fun with it. No, I think it will be pretty fun to match up against (teammate Jonathan) Toews. Kind of been together our whole careers and played together a lot. So it would be fun to be away from him for a bit. But we'll see what happens.”

Kane, it seems, wouldn't mind a few other pleasant surprises along the way.