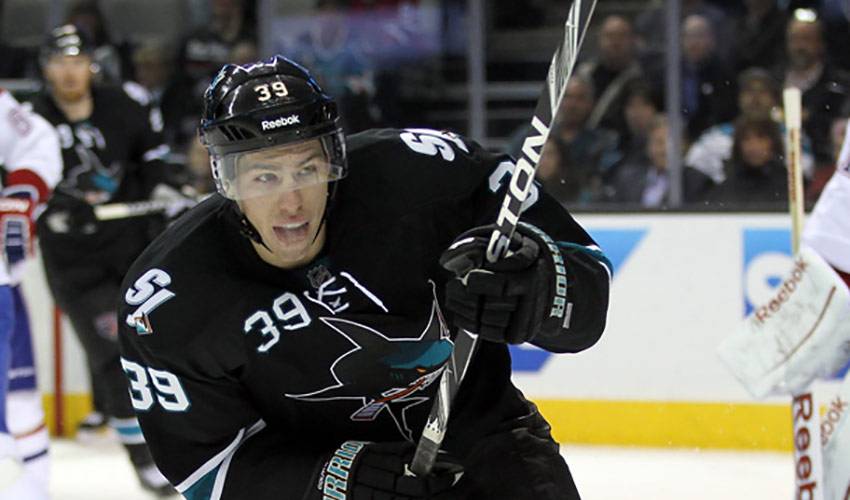 He's skated in fewer than 150 regular season NHL games, is in the midst of only his second full big-league campaign and is just 22-years-old.

more than makes up for in attitude and ability. Logan CoutureBut what he lacks in experience,

There's no doubting, Couture, San Jose's ninth overall selection at the Entry Draft in 2007, was one of the most dangerous Sharks last season, a year that yielded 32 goals, including eight game-winners and 56 points for the kid from London, Ontario.

And though he didn't take away top honours in voting for the Calder Memorial Trophy as the league's top rookie, he served notice that he is one of the game's top young stars.

Yet for all the accolades and acknowledgment he's received and continues to receive, the centreman isn't preoccupied with individual praise.

“I learned a lot last year and I wanted to take that and be ready for this year,” said Couture, who appeared in 25 games with the Sharks in 2009-10, recording 9 points. “As a young player, you can pick up a lot from the veterans on this team, little things on how you can improve parts of your game. That stayed with me the whole summer.”

It's obvious Couture hasn't forgotten what he learned.{{QUOTE}}

He's on pace to best last year's numbers across the board, as San Jose, once again a popular pick to represent the Western Conference in the Stanley Cup finals, look to net their first championship.

Last year, the Sharks lost to the Vancouver Canucks in five games in the West final, after finishing first in the Pacific Division for the fourth consecutive season.

Couture, who was sensational in San Jose's 18-game post-season, scoring seven times and adding seven assists, isn't fazed by the team's disappointing finishes over the past few campaigns.

Instead, the player who made his NHL debut on October 25, 2009, tallying his first NHL goal only 11 days later against the Detroit Red Wings, is buoyed by what he believes is a team that can contest for all the spoils.

“Things didn't start out that well for us this year, but we've picked things up,” said Couture, who was drafted by the Ottawa 67's 12th overall in the 2005 Ontario Hockey League draft, recording 64 points in 65 games in 2005–06, third in league rookie scoring behind fellow NHLPA members John Tavares and Sergei Kostitsyn. “You just can't afford to get too high or too low throughout the season. It's 82 games, but you don't want to look back and realize you gave a lot of points away. One or two points can make a huge difference as to where you're seeded in the playoffs.”

San Jose will no doubt be hoping Couture, who appeared in 42 games with the American Hockey League's Worcester Sharks in 2009-010, scoring 20 goals and 33 assists for 53 points, continues to hold a hot stick.

A standout athlete who excelled at a variety of sports, including baseball and lacrosse, Couture, who played part of his minor hockey career with the 'AAA' London Junior Knights of the Minor Hockey Alliance League where he was a teammate of Los Angeles Kings' defenceman Drew Doughty, welcomes the pressures that come with expectation.

“You hope the goals or points you get go a long way in determining the outcome of games and that's what I want to do,” said the forward, who signed a two-year contract extension through the 2013-2014 season this August. “But it's not always about personal points. If there are other things that you can do, blocking a shot, being strong on the forecheck, or backchecking, those all factor in to being a complete player.”

A player that is hardly concerned with what his stats line reads like at the end of the season.

“I really don't look beyond what the team does,” said the three-time OHL All-Star Game selection. “There are so many capable teams in this league. Eight teams make it on each side and some good teams don't get in. You don't forget that at any time. As a group, we want to continue to grow and be better. If we succeed together, that's what will make me the happiest.”

And more of the same consistent play from Logan Couture will continue to make his teammates and Sharks fans just as happy.