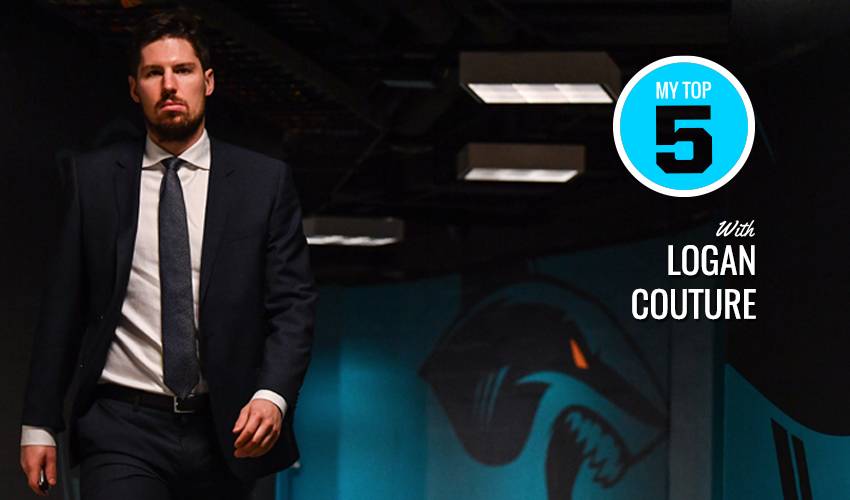 With the NFL season having kicked off, Logan Couture, San Jose’s star forward, and the team’s fantasy football commissioner, stopped by NHLPA.com for some gridiron talk including pro football players he believes would make good NHL players.

With Week 1 of the NFL in the books, football fan Couture offered up his pick as to which Sharks player is the favourite to win the team’s fantasy crown, and who could possibly provide the upset.

As for the fantasy team he assembled, the 30-year-old, who had his best big league offensive season to date in 2018-19, isn’t exactly brimming with confidence.

“I’m a big Bills fan, so I would have to go with (quarterback) Josh Allen. He’s my No 1. He’s big, he’s got a great arm – maybe he can translate that into a solid slap shot.”

“I’ll go with Travis Kelce of the Kansas City Chiefs. He’s a big guy, and I think he’d be up for the challenge of playing power forward.”

“You’d have to go with (New England quarterback) Tom Brady, just because he’s good at everything. He could probably play whatever position he wanted. He reminds me of Jumbo (San Jose teammate, Joe Thornton) who is still playing at an older age.”

“I’d also have to think that (Miami Dolphins quarterback) Ryan Fitzpatrick might have a shot at being a good NHL player. He went to Harvard, he’s a smart guy… so he could probably figure out how to play hockey.”

“We’ll go with Luke Wilson (Ontario-born tight end, currently a free agent). He’s Canadian, and you have to think he played hockey at some point in his life, so he’s a good one to round out the Top 5.”

Who does Couture see taking home the title as San Jose fantasy football champion this year?

“Brenden Dillon won three out of the last four years. He’s been in the finals every year, so he’s probably the favourite again.”

Who is the dark horse choice to pull the upset?

“Martin Jones is a new addition to the fantasy league this year. He had the first overall pick, so he would be the dark horse. He took (New York Giants running back) Saquon Barkley. And for worst team – just my own point of view – that would be Joe Thornton.”

How does Couture’s team size-up?

“I’m not pleased with my team. There are some picks that I didn’t love, but hopefully it turns out alright for me. I took (Kansas City Chiefs running back) LeSean McCoy in one of the later rounds. My first pick was (New Orleans Saints receiver) Michael Thomas and I took Travis Kelce as well.”