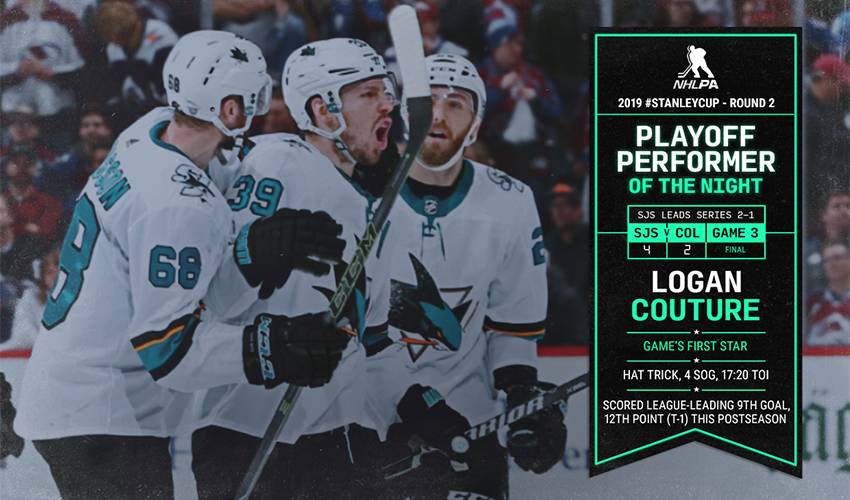 DENVER — Logan Couture scored three times, including the go-ahead goal with 7:10 remaining, and the San Jose Sharks beat the Colorado Avalanche 4-2 on Tuesday night to take a 2-1 lead in their Western Conference semifinal series.

Couture sent a shot over the shoulder of Avalanche goaltender Philipp Grubauer just 65 seconds after Matt Nieto tied the score. Couture sealed it on an empty-net goal with 29.5 seconds remaining. Timo Meier also scored for the Sharks, who improved to 24-16 all-time in Game 3 of a series.

Game 4 is Thursday in Denver.

It's been an exciting few days for Sharks Gustav Nyquist, whose wife gave birth to a daughter Monday. He returned to the team before the game and recorded two assists.

Nathan MacKinnon had a short-handed goal and Nieto added another to help the Avalanche rebound from a 2-0 first-period deficit. Philipp Grubauer made 27 saves for Colorado, which snapped an eight-game home win streak.

The Avalanche went on the power play with 2:56 left when Couture was called for tripping. Colorado pulled Grubauer for an extra skater, but Couture wrapped it up with a goal to register the hat trick.

Nieto tied the score when Samuel Girard sent a shot at him. Nieto managed to tip it in while jumping in the air. As the crowd was still buzzing, Couture made a nifty move to score and silence the building. Couture has a playoff-leading nine goals.

Down 2-0, Grubauer kept the Avalanche within reach during the second period. He had a shot by Marc-Edouard Vlasic bounce off his glove and clang off the crossbar. Grubauer later stopped Evander Kane on a breakaway that energized the crowd.

Late in the period and with San Jose on the power play, Brent Burns tried to send a pass up the ice, only to have it intercepted near -ice by Ian Cole. He dished it over to the speedy MacKinnon who raced into the zone and beat Jones with a wrist shot.

Colorado once again teamed up a pair of 20-year-old in Cale Makar and Samuel Girard. The combined age of Makar and Girard is only slightly greater than Sharks forward Joe Thornton, who turns 40 in July.

Couture gave the Sharks the early lead when he fended off Makar down low and knocked in a backhand shot over Grubauer. Toward the end of the first period, Meier took advantage of a turnover by Erik Johnson in the neutral zone to give the Sharks a two-goal lead.

It was Meier's third goal of the 2019 playoffs after scoring 30 in the regular season.

NOTES: Sharks captain Joe Pavelski and F Joonas Donskoi didn't travel with the team, coach Peter DeBoer said. Pavelski and Donskoi were both hurt during the Vegas series and have yet to play in this one. ... Colorado F Matt Calvert was out with an upper-body injury. ... With Colorado and the Denver Nuggets both in the second round, Avalanche coach Jared Bednar was asked if the ice was at all an issue as the Pepsi Center goes through constant conversions. "Not for me," Bednar said. "It didn't seem to hurt us in the Calgary series."

Back at Pepsi Center for Game 4 on Thursday.