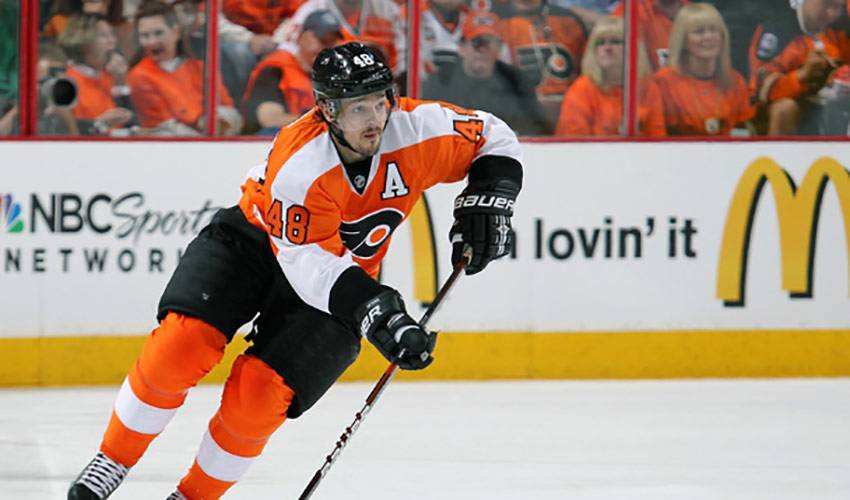 He's averaged a point per game over his 103 NHL playoff appearances, which included a five-goal, eight-point output in six contests in this year's opening round. But individual stats aren't what motivate Daniel Briere.

In a hotly-contested, high-octane match-up against their bitter state rivals in the opening round of the Eastern Conference playoffs, Briere and the Philadelphia Flyers were able to outduel the Pittsburgh Penguins in six games to punch their ticket to the East semifinals.

For his part, Briere was in his typical post-season form, a dynamic offensive force that created an endless amount of scoring opportunities for himself and his teammates.

“Well, it was nice to contribute in the series, but in the playoffs, nothing else matters but winning,” said the speedy centreman, who had 14 shots and one power-play tally in the quarter-finals. “What you want to do is to give support to your team by playing the role you are able to play.”

If past playoff history is indeed an indicator of what's expected and what's delivered by the 34-year-old, scoring key goals and being a constant threat in the opposition's end is what Briere does best.{{QUOTE}}

In the 2009-10 playoffs, he was virtually unstoppable.

Briere led all players in scoring with 30 points (12 goals and 18 assists) and broke the record for points in a post-season by a Flyer, which was held previously by Brian Propp, who had 28.

In the final, Briere finished with 12 points (three goals and nine assists), which was one point shy of Wayne Gretzky's record of 13 in a final. It was the highest total in a final since Mario Lemieux in 1992.

He's off to another impressive start this year.

But, in typical fashion, Briere isn't particularly interested in what he achieved in round one.

“To beat Pittsburgh, a great team and a big rival, that was huge,” said the veteran of 813 NHL regular season games. “We gave ourselves the chance to be happy about that the day after, but then it was back to business.

That's just the way it has to be. Every round gets tougher and tougher. Every team presents a challenge.”

Which is what the Flyers were reminded of after taking a 3-0 series lead against the Penguins, then watching Pittsburgh fight back to win the next two games.

“Those two games we lost were certainly not our best efforts,” offered Briere. “We felt good about the way we were playing, but when they won the next two, the pressure was building and we had to do something about it. I think the veteran guys did a great job handling the situation.”

Briere had plenty of praise for several of his teammates, including Claude Giroux's performance throughout the first round, highlighted by his outstanding effort in Game Six.

“Claude got things rolling for us when we needed it,” said Briere, of the forward who netted 14 points against the Penguins. “He was unbelievable. But I could go down the list and say something positive about anyone. I'm so proud.

“Two other guys that come to mind are (defencemen) Erik Gustafsson and Andreas Lilja,” continued Briere. “It wasn't just the offence that Erik gave us when we needed it. It was his defensive work and the fact he was asked to play a lot more minutes. Andreas was also huge for us on the blueline. He played big minutes and was wonderful.”

The Flyers will now face the New Jersey Devils in the Eastern Conference semifinals. The Devils beat the Florida Panthers in seven games to move on.

Briere is hoping Philadelphia can carry their momentum into the next step on their Stanley Cup trail.

“This is definitely one of the tightest teams, chemistry-wise, that I've played on since I came into the league,” said the 24th overall selection of the Phoenix Coyotes in the 1996 NHL Entry Draft. “Everyone here is hungry and everyone is willing to do what it takes to win. That's just what you want to see.”

As for what he'd like to see from himself?

“It's all about providing that support, doing what you do best to contribute and to make sure you get that win,” said Briere, who has 12 game-winning playoff goals. “There is so much on the line…I just want to be at my best.”