Between The Bluelines With Daniel Briere

The Flyers forward talks going from junior to the NHL, facing a goaltending legend & his overall career 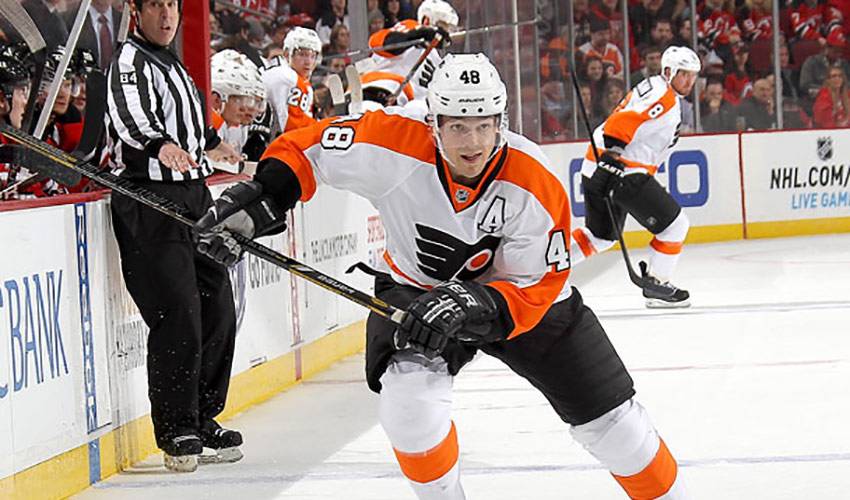 There was a time when Daniel Briere wasn’t quite so sure how his NHL career would play out. In fact, he’ll happily admit he was wrong when it came to predicting how long he’d be competing at this level.

The former Quebec Major Junior Hockey League star recently spoke with NHLPA.com about taking his best shot against a goaltending legend, a memorable conversation with a Coyote and much more. Now, it’s time to go Between the Bluelines with Daniel Briere: TAKING HIS ‘Q’: “When I played my first game in the QMJHL, I felt that I could play in the NHL someday, if I worked hard and applied myself. As a young player, the one question that usually follows you is, ‘Can he take the next step?’ I was 16 when I started in the ‘Q,’ playing against guys that were 18, 19 and 20. I was able to keep up with them, and in that league, you have to. At first, you don’t know how things will go, but I began to feel more confident with each game.” JUST DO IT: “We had a very tough team when I played in Drummondville. (Laughing) That was great for me. I was lucky because not too many guys would take liberties with me. I always knew those guys would have my back. When you know you are going to be protected if anything comes up, you play more relaxed. You just focus on your role.” TRICKY: “One game that really stands out when I played in the Quebec League was during the NHL lockout in 1994-95. Alexandre Daigle came back to play with Victoriaville. Here was a guy that was playing in the NHL and we were going up against him. It really motivated me because that’s what I wanted to achieve one day, to play at the top level. I had a hat trick that game and it was one of my most memorable moments.” FACING A LEGEND: “My first NHL game, I was with Phoenix. We played against Colorado and Patrick Roy was in net. It was amazing to go up against a legend like him. I didn’t score, but I had a decent game and had some scoring chances. I feel very fortunate to say my first NHL game happened to be against Patrick Roy.” EXCEEDING EXPECTATIONS: “When I began my NHL career, I would think to myself, ‘Will I last?’ It took four years before I was a regular at the NHL level. I would be up and down between the NHL and AHL and there were no guarantees. I remember joking with Shane Doan when I was in Phoenix. I told him I would love to stay in this league until I was about 30-32. I figured that would be the end for me. But, here we are. I’m 35 now. I realize how fortunate I am. If everything goes well, I can keep playing this game for awhile.” He has four gold medals in as many appearances with Team Canada, a player that continues to be a difference-maker in the big games. But in the difficult moments, the 24th overall pick in the 1996 Entry Draft knows he can look to the past to help him in the present. “I still talk to Andre Ruel, who was there in Drummondville when I was playing and is now a consultant with the team,” said Briere. “If I’m going through a tough stretch, he helps me out. He has a very smart hockey mind. When I speak with him, I know he’ll be able to help.”