Quick To Praise His Mates

Jonathan Quick's play has been strong, but the Kings netminder doesn't hesitate to heap praise on his teammates 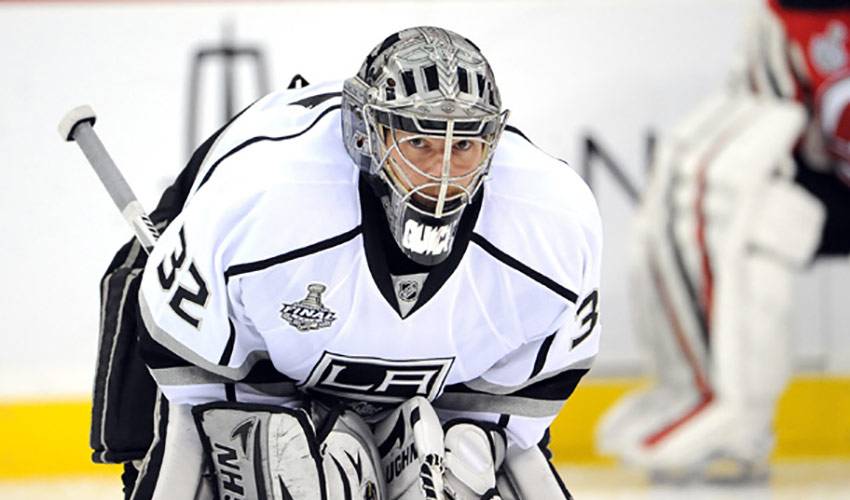 The tone of his voice, the calmness in which he speaks, would never suggest that Jonathan Quick is in the midst of hockey's most intense times.

Of course. No problem. Be happy to talk later today. Give you a ring after we practice.

Even his text messages bring out his laid-back demeanor, a big-time backstopper without a big-time ego.

Welcome to the world of Jonathan Douglas Quick.

He's been one of the best goaltenders in the league in 2011-12, both in the regular season and playoffs.

Quick recorded 35 wins for the second straight campaign, set a career-best mark with 10 shutouts and a paltry 1.95 goals against average, along with a stellar .929 save percentage.

The 26-year-old has been even better in the Stanley Cup playoffs, winning six games against one loss, allowing just 11 shots to get past him, while earning one shutout along the way.{{QUOTE}}

Quick, the 72nd overall selection of the Kings in the 2005 NHL Entry Draft, was a major reason Los Angeles took out the No. 1 seed Vancouver Canucks in the first round of the Western Conference post-season, setting them up for a second-round series against the No. 2 seed St. Louis Blues.

After two games, both contested in St. Louis, Quick and the Kings have a 2-0 series lead, punctuated by an authoritative 5-2 win in Game Two.

As for what he was most proud of when it came to his performance in the West quarter-finals, the Connecticut native's answer deflected any praise away from himself.

“I think the one thing that I really liked about the first round is that it means we have a chance to move on, to be given an opportunity to win another series,” said Quick, who played in his first NHL game on December 6, 2007 against the Buffalo Sabres in an 8–2 win. “It was huge for the organization. Really, that's what everyone was looking for, the chance to move on.”

Quick, who was recently nominated as a Vezina Trophy finalist, along with Henrik Lundqvist and Pekka Rinne, admitted it was a major accomplishment to get by a high-quality opponent.

“That was a great team we played against,” said Quick, who was named to the United States team for the 2010 Winter Olympics in Vancouver, where he won a silver medal. “We didn't take anything for granted before or during the series. I thought we did a good job respecting our opponent. This was a team that was in the finals last year, where they went to seven games, and a team that won the President's Trophy (first overall in the league).”

Quick, who earned his first career NHL playoff shutout on April 17, 2011 against San Jose Sharks stopping all 34 shots for a 4-0 win, notes unselfish play and a total team effort as the main reasons why the Kings have gone on to contest the West semifinals.

“There were so many guys that played big roles for us in the series against Vancouver,” acknowledged Quick, who played collegiate hockey with he University of Massachusetts-Amherst, who as a sophomore, led UMASS to its first ever NCAA Tournament appearance in 2006. “I think maybe the line that didn't get as much credit as they deserved was our fourth line. They competed hard every shift, were able to shut down the opposition and created scoring chances. They might not play as many minutes as everybody else, but they were so key for us.”

Quick will be counted on to come up big again against the Blues. In Game One, he did, allowing just one puck to get by him in a 3-1 Los Angeles road win. He was also strong next time out.

That's why Kings fans shouldn't get rattled should Quick give up a soft goal. The man behind the mask certainly won't be.

“I think it's a natural progression,” he offered. “Your first few years in the league, you're focused on making a great impression and sometimes mistakes, you see them as a bit of a setback. But once you establish yourself and have a certain comfort level, a bad goal, well, you realize that it's not the end of the world. Bad goals will happen. You just have to be able to deal with it. You just have to remain confident.”

With the way he's playing, Quick, in the midst of his third consecutive playoff appearance with the Kings, is certainly inspiring confidence in his teammates, as they look to bring Los Angeles its' first Stanley Cup.

And whether he's making a game-winning save in overtime, or spending time away from the game with his family, nothing ever seems to rattle the calm, cool and collected man in the crease.