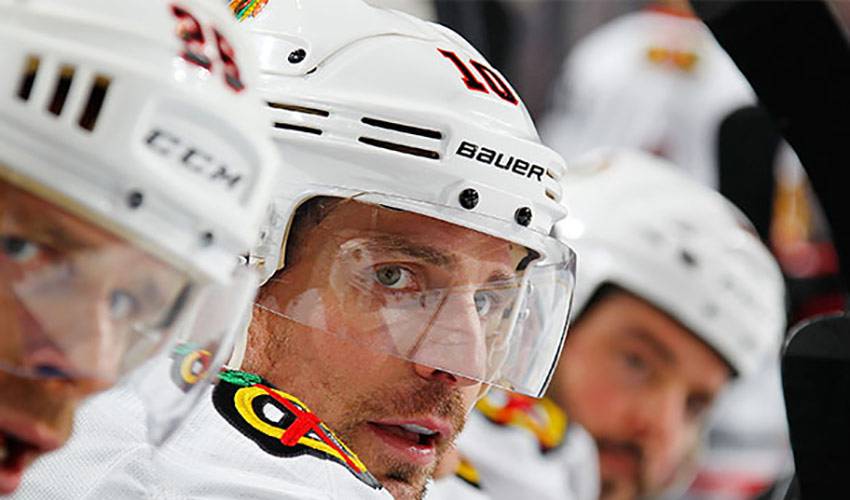 When it comes to the most important advice he’s ever been given, Patrick Sharp will tell you it’s just a single word, one his mother repeatedly reminded him of over the years. Believe.

He had always dreamed of an NHL career, hoping one day to have the chance to skate on the same ice as his childhood heroes, and perhaps, if he was lucky enough, to raise the Stanley Cup above his head.

“Believe,” said Chicago’s alternate captain, who has won the Stanley Cup twice with the Blackhawks in 2010 and 2013, and added a gold-medal with Canada at the 2014 Winter Olympics. “Believe in myself as player, believe that my teammates are going to have success and to never have doubts when times get hard. My whole life, my mother constantly said that to me and it's something that I'll always remember.”

He’s one of the game’s top offensive standouts, a consistent scorer who has hit the 30-goal mark four times. This season, the Winnipeg-born, Thunder Bay-raised forward is in the midst of a dream campaign, including an NHL career-best 78 points.

Just how good of a year has it been? Sharp celebrated his birthday, December 27, with a hat trick, and then came back from Russia in February wearing gold.

“This season has had some very memorable days,” said Chicago’s alternate captain. “I've been lucky to play with great players on the Blackhawks as well as Team Canada. The hat trick was cool because my parents were in the crowd. Hopefully, I can continue to stay healthy and help the ‘Hawks play well in the playoffs for some more great memories.”

Memories that Sharp never anticipated when he suited up for three games in 2002-03 as a member of the Philadelphia Flyers, the team that drafted him 95th overall in 2001.

“Early in my career I was focused on being the best player that I could be and to become a regular, everyday NHLer,” he admitted. “From there, I just wanted to improve every season and enjoy living out my childhood dream.”

The former university standout at Vermont has done just what he set out to achieve.

But that doesn’t mean Sharp, whose ‘Hawks will take on St. Louis in the first round of the Western Conference playoffs, is complacent. It’s quite the opposite, in fact.

“I'm very lucky now that I play on a great team and organization,” he offered. “I try to not look back and rest on what I've accomplished.”

One thing he does focus on, however, is keeping tabs on the sport’s top talents.

“I enjoy following great players and trying to reach what they've done in their careers,” said Sharp, who set up the late game-tying goal and then scored the overtime winner against Montreal on Wednesday night. “Always trying to get better.”

And always recalling what his mother said. Believe.