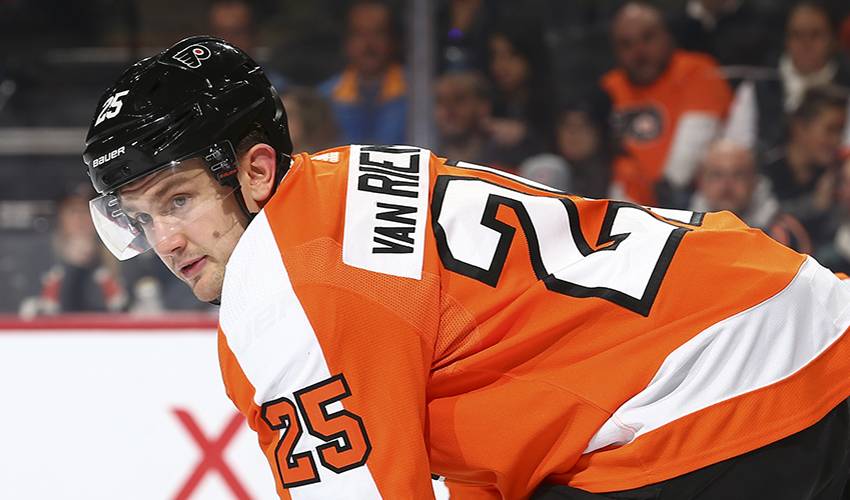 It’s somewhat of a minor miracle that the James van Riemsdyk found the time to squeeze in another phone call.

Life has been hectic, to say the least, for the 31-year-old.

But he’s not complaining.

The New Jersey-born forward has played an integral role as an NHLPA representative on the Return To Play committee, dating back to the spring. He was part of the committee in April that worked with the NHL to restart the 2019-20 season and more recently, the players’ group that worked internally to help come up with the blueprint to start the 2020-21 campaign.

In between video conference calls with fellow players and NHLPA staff, along with a mix of phone calls, text messages and emails with teammates, van Riemsdyk sought to find time for family, off-season training, and gearing up for the holidays.

“Obviously, the circumstances were unique and presented a lot of challenges,” he said, in referencing the COVID-19 pandemic’s impact on the resumption of last season as well as launch of the upcoming season. “Certainly, overall, I think the guys did a great job of being informed and knowing what was going on throughout the whole process of getting back on the ice.”

Back in July, the NHLPA and NHL reached agreement on a four-year CBA extension, allowing the game to navigate the many challenges presented by the pandemic.

“I think the guys took a little bit of ownership in everything, trying to understand the issues that were at play, and looking to work with the league, so that we could give the business side of the game a little bit of stability for the coming years to help spread the impact over the course of that CBA,” he added. “It was all about finding the best way forward. As players, I think we did a great job handling all of the different aspects that were part of this.”

As did van Riemsdyk, husband and father.

Working overtime, dedicating himself to his fellow players and his family became the norm over the past few months.

Having a seat at the table has been a rewarding experience for the veteran of 741 NHL games.

“Over the years, I’ve been able to learn a lot about the game and I found that extremely interesting. To be behind the scenes when you are on these committees, you have a different appreciation for the leadership of the NHLPA and the league, and the issues that need to be navigated through. When we went into the bubble earlier this year, making sure that went safely for the guys, that’s a testament to the NHLPA and the league for working together to get that done.”

The second overall pick of the 2007 NHL Draft is happy he’ll soon get to trade in his work-from-home attire for his hockey uniform.

His Flyers teammates are looking forward to seeing the puck drop on the new season.

“For sure. With all the uncertainty and extended break, it certainly leaves you with a lot more time at home, and it’s weird to be in our off-season cities at this time of year when it starts to get colder. I know here in Minnesota, the lake that I’m on is starting to freeze over, so it’s a little bit strange to be out here, and you get that itch to want to be out there playing and competing with the guys. We’re definitely itching to getting started up again.”

Don’t expect van Riemsdyk to strap on the skates and test the outdoor ice out quite yet.

“Where I am, this part of the lake is one of the deeper parts, so it’s still not frozen completely. I’m hoping by the time I leave I’ll get to take a little whirl on it. It’s not quite at the point where it’s safe yet.”

The alternate captain is at a point, however, where he’s thinking about Philadelphia’s first game in 2021.

What’s he most looking forward to?

“I would say first and foremost that I’m just excited about playing games again. This is something we love to do, we’re passionate about and we put a lot of time, attention, energy and effort into training to be the best we can be, so it’s great to put all that to work when the games start. Hopefully we are able to get some fans in the building at some point. There’s nothing like the buzz of a Saturday night game in these NHL cities – that just makes it more special and a lot of fun.”

Before the season begins in January, van Riemsdyk is looking to get some more dad time in with his young daughter Scarlett, while also enjoying the Holiday season.

“Maybe before we head back [to Philadelphia] she’ll start crawling. Right now, she’s on her stomach doing something that looks like planking. Being able to be around her during this past while makes things a lot better. As for what I wanted for Christmas this year, it’s going to sound cliché, but for my family and friends to be healthy. That’s also what I want for hockey fans and everyone.”

🥳Today he celebrates his 31st birthday – and yesterday he welcomed Scarlett Everly into the world alongside his wife, Lauren!
@JVReemer21 on becoming a dad, #StayHomeHair and more 👉 https://t.co/R7JFnBQsPN