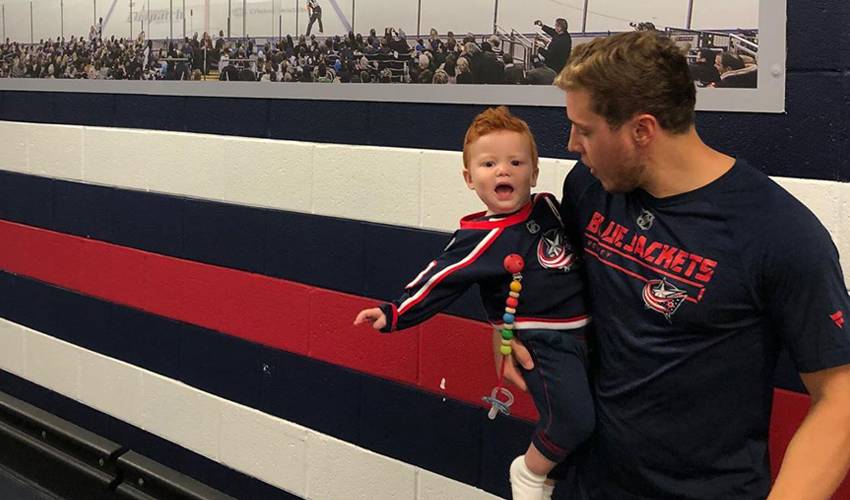 It’s no exaggeration to say that Cam Atkinson has been a force for the Columbus Blue Jackets with over 500 regular-season NHL games under his belt. But the 30-year-old’s ability to make an impact on others isn’t solely confined to the rink.

Whether it’s mentoring younger players, giving back to the community, or enjoying family time – Atkinson puts his heart and soul into every aspect of his life.

From hosting Cam's Carnival in Plain City, Ohio, an event/fundraiser that also helped celebrate his 30th birthday, to his work with the Force Network Fund, an initiative that raises money and awareness to support military and first responder causes, Atkinson is all about connecting with fans and the community. He also part-owns The Battery Hockey Academy, located in Plain City, Ohio. The academy’s slogan, “Do What You Love, Train Like A Pro,” is certainly appropriate.

Entering 2019-20, Atkinson had recorded 186 goals and 342 points in 527 regular season NHL games. Last year, he scored a career-best 41 goals (which led the team) and 69 points. He sits in second spot in Blue Jackets history in points scored, and this season should move into second (behind Rick Nash) in franchise games played.

Atkinson and his wife, Natalie, welcomed a baby boy, Declan Cameron, last July. The proud father has enjoyed several memorable moments with his son, including a must-see video of the forward going top shelf – after a few fancy moves – on goaltender Declan.

Atkinson can thank Natalie for capturing a lot of those special times on camera.

“What I love, is that Natalie makes me these digital photo albums, where she puts a bunch of pictures together. She’s done that on a few occasions, where there are photos with a theme of the month. She’s been a rock star from the get-go. Having a young son, it’s a 24/7 job. Without her support, things wouldn’t go as smoothly as they do. She’s the rock of the family.”

AWAY FROM THE RINK

Atkinson’s top three favourite movies (in order) are Step Brothers, Happy Gilmore and Billy Madison. His favourite celebrity to follow on social media is comedian/actor Kevin Hart. His favourite things to do outside of hockey is playing golf and spending time with his family. His favourite way to spend a day off is “being on the boat with my family and brothers.”

“To this day, it’s one of my favourite things to hear, even if it scares the heck out of me almost every time it goes off. There are still times – it goes off when we come out at the start of the game – that I sometimes forget. And then there it goes. It certainly wakes you up.” – Atkinson on the Blue Jackets Goal Cannon