It’s a Christmas first for Columbus Blue Jackets forward Cam Atkinson and his wife Natalie, as the couple celebrates their first Holiday season with their son Declan. 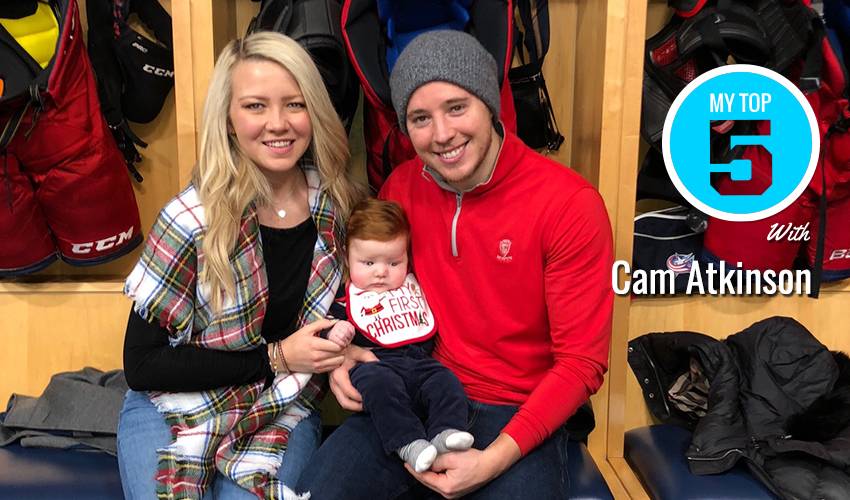 It’s a Christmas first for Columbus Blue Jackets forward Cam Atkinson and his wife Natalie, as the couple celebrates their first Holiday season with their son Declan.

What can Declan look forward to this Christmas? For starters, there’s going to be presents (lots and lots of them) and a new place to open them.

How did he fare sitting on Santa’s knee? His dad has the surprising answer (and more) in this week’s edition of Top 5.

“We’ve moved into our new house, which we’ve been renovating for the last six months. The house is about 90 per cent done, so we’re having our first Christmas as a family here. We have the in-laws coming in and my mom and dad will be here as well. Everyone’s excited to spend the first Christmas with Declan in the new house. He’s the first grandchild on both sides. He’s been spoiled off the hop, as soon as he was born.”

“I wish it would snow, so he can see that. The house, the property sits on about one acre, and there’s a big backyard. Hopefully, it will snow – there’s a little bit of a hill – so it would be great to see him go down that on a sled.”

“We are getting gifts for everyone, but we specifically told our families not to get us anything. Instead, we asked them to get gifts for Declan. Not that he needs any more toys, but everybody’s excited to be able to give him presents. Since it’s his first Christmas, they all want to make it memorable for him.”

“We went to get his picture taken with Santa. So, he sat on Santa’s knee and was smiling. He didn’t cry one bit or try to pull off his beard. It was kind of funny. You always see those pictures of kids crying hysterically when they get that photo taken. So far, he’s been a really easy baby.”

“What I love, is that Natalie makes me these digital photo albums, where she puts a bunch of pictures together. She’s done that on a few occasions, where there are photos with a theme of the month. In September, he wore a Columbus Blue Jackets outfit, and in October, he was in his Halloween costume. Last month, it was Thanksgiving, so it was all about that. She’s really good at putting those together. We’ll definitely get a lot more photos over Christmas.”