Are you ready to rock? Erik Gudbranson certainly is. 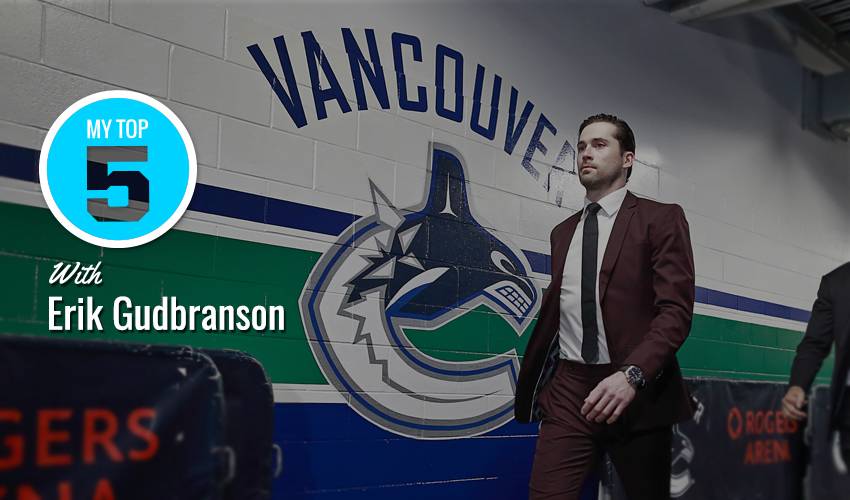 Are you ready to rock? Erik Gudbranson  certainly is. The Vancouver Canucks blueliner skated by NHLPA.com to offer up his five favourite musical acts of all time.

As for which group he’d love to step on stage and belt out a few tunes with, the 26-year-old D-man opted for a heavy metal band that was formed in the early 1980s.

And with that, here is this week’s edition of 'My Top 5'!

1. Thunder from Down Under

“I love AC/DC. I’m taking them, for sure. I just live and breathe those guys and Metallica (see No. 2). I’ve been listening to them since I was a kid. I still listen to Shoot To Thrill before I go in for any game. Every game I’ve ever played, I listen to it.”

“Big fan of Metallica. It’s a childhood thing for me, just like AC/DC. I guess my favourite song by them would be Fuel, but there are so many. I could say One, or I could go with The Unforgiven. I could pick any one of their songs, really. If I could get on stage with anyone, it would be Metallica and I’d play Fuel. But I have a terrible singing voice and I can’t play the guitar either.”

“I’m a big rock fan, which doesn’t seem to go around much any more. I still love stuff with guitars. The other group I liked as a kid – the more I think about it, the more influential they were – was Linkin Park. My favourite song by them is probably 'Don’t Stay'.”

“I’m going to throw a curveball. I just have to figure out who I’ll go with. I’m going to go with Method Man. I’m serious about that. I don’t mind it at all.”

“I’m also going to go with the Wu-Tang Clan. It’s just so nice to bob your head sometimes. That’s really what it is. I’ve been thinking about doing some guitar lessons around here on my days off, but it hasn’t come to fruition yet. I have one, but it sits there and collects dust right now.”

“If I had to choose a teammate to go to a concert with, I’d take Alex Edler. He’s the only one on the team that likes the stuff that I like. He’s old enough to appreciate the guitars – and that’s not that old.”