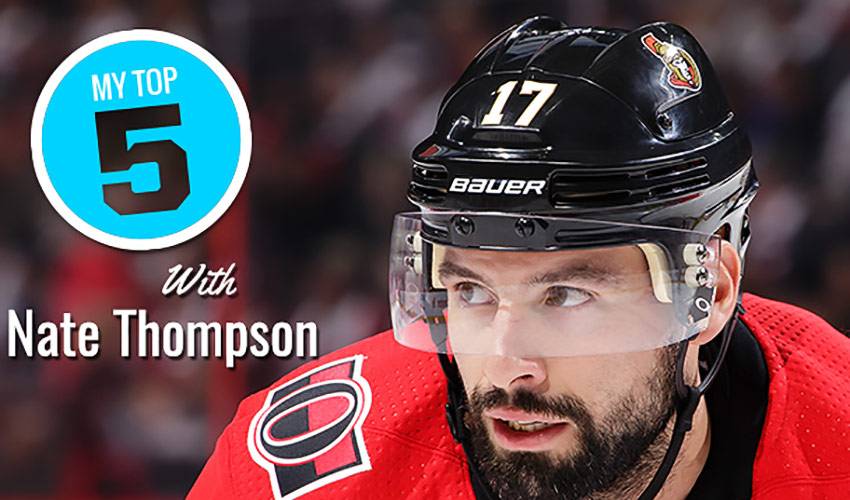 A physical forward with excellent defensive skills, Nate Thompson, who is closing in on 600 career NHL games, is looking to play his part in making this season a success story for the Ottawa Senators.

A native of Anchorage, Alaska, the 6-foot-0, 212-pounder netted his first goal for Ottawa in a 6-3 home win over provincial rival Toronto on October 21.

When he’s not blocking shots or working the penalty kill, the 33-year-old Thompson enjoys the chance to catch the latest movie or watch his favourite television series.

As for the one thing he’s embarrassed to admit he enjoyed watching, count this former Western Hockey League graduate as a true Belieber…well, sort of.

“My favourite TV show of all-time – that’s a tough one – but right now, this show gets me every time. I pretty much mute my phone and make sure everyone’s quiet – it’s Game of Thrones for me. There’s always something that’s going to happen that you’ll have no idea is coming. They’re not afraid to kill off a character that’s been on the show for seven seasons. That’s probably why it’s so good.”

“My favourite movie is A River Runs Through It. I’m a big fly fishing guy and I could probably narrate the whole movie over and over again. I know all the quotes and all the sayings. That’s probably the top one for me.”

“I’d probably have to go with Brad Pitt because he’s in my favourite movie and he’s in a lot of good movies that I’ve seen. He’s very versatile with his movie. He was great in Legends of the Fall and Troy. I would go with him.”

“I think that Kristen Wiig is hilarious. I really find her very funny. I’d go with her. When I saw Bridesmaids, I couldn’t stop laughing. She was great in it.”

“(Laughing). You know what, I’ll have to say this. When I was roommates with Teddy Purcell in Tampa, we were on the road in the Boston and we decided to order a movie at the hotel. It was a documentary and we thought it was amazing. It was the Justin Bieber documentary, Never Say Never. I’ll probably have to admit that. As embarrassing as it was for two men watching Bieber in a hotel room, I have to say that documentary was really good and he is really talented.”