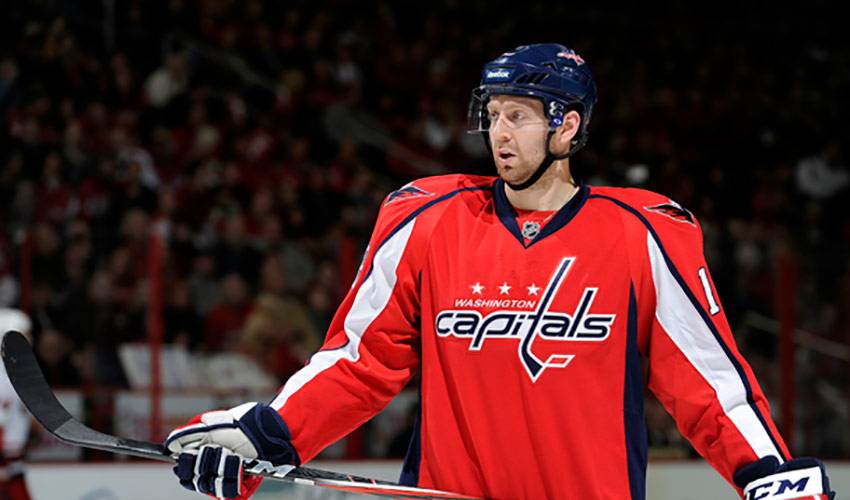 Eric Fehr might have had modest expectations when it came to his return to the Washington Capitals lineup, but his first game back went better than he ever could have envisioned. Though he is now day-to-day with an upper-body injury, Eric will certainly be a big-part of the Capitals playoff push this season when he ultimately returns.

A shoulder injury had kept him out of action for a prolonged period of time, 22 games, to be exact. So, when Fehr, who suffered a dislocated shoulder in mid-January, finally had the chance to skate in his first NHL game since January 14, the forward was hoping to, at the very least, create a few scoring chances and provide some solid defensive work.

Admittedly, he figured he'd be a bit rusty after being out for as long as he was.

Happily, Fehr, the 18th overall selection of the Capitals in the 2003 NHL Entry Draft, was anything but rusty.

In fact, his performance was literally twice as nice as he anticipated.

“My hope was that I would feel comfortable out there and that I would try and provide some kind of spark, in some form,” said Fehr, who netted two goals in a 5-0 Washington win over the Edmonton Oilers. “Really, I just wanted to get back out there and play hockey again.”

It wasn't only a memorable game for Fehr.

Not a bad way to make a comeback.

“I would say that's about as good as it gets,” offered Fehr, who played 71 games for the Brandon Wheat Kings of the Western Hockey League in 2004-05, a season in which he captured the Bob Clarke Trophy as the WHL's top scorer with 111 points, was a member of the WHL East First Team and voted the WHL Player of the Year. “It was a big game for all of us. Obviously, the key was in getting the win and keeping our strong play going.”

“It has been tough being out, but the guys have been playing fantastic hockey,” said Fehr, who signed a two-year contract with the Caps in July of 2010. “At first, the tough part is the physical nature of the injury.

As it drags on, it's more the mental part of it. Not being around the guys is tough.”

Washington, one of hockey's hottest teams in the second half of the 2010-11 campaign, is looking to erase last year's bitter playoff disappointment. Finishing first overall, the Caps were dispatched from Stanley Cup contention in the first round, bowing out to the eighth-seeded Montreal Canadiens.

Fehr would love nothing more than to do his part to ensure there's no repeat of last year's experience.

Last year, Washington was an offensive wrecking ball, leading the league in goals scored while making life miserable for anyone trying to keep their talent-laden lineup in check.

This year, though, it's a more balanced approach that has once again put the Capitals in prime contention for a shot at the club's first Stanley Cup championship.

Fehr likes what he sees.

“I feel the team has come a long way,” said the forward, who scored his first NHL goal on January 27, 2007, which represented the game-winner in the Capitals' 7–3 victory over the Carolina Hurricanes. “But we're doing this the better way. Before, we'd find ourselves in a lot of high-scoring games. Now, we're in tight games, defensive ones, but we're still coming out on top.”

Their defence-first approach isn't quite what Fehr and his teammates expected.

“If you would have told me at the beginning of the year that this is the way we'd be winning games, I wouldn't have believed you at all,” he admitted. “I think we've been shut out seven or eight times this year.

But we have changed our style and it has worked.”

So, too, has Washington's third line, one that features Fehr, Brooks Laich and Jason Chimera.

“I take a lot of pride in helping be a good linemate,” said Fehr.

“Jason, I think he might be the fastest guy in the league. And Brooks, he's a hard-working guy that you can also depend on. I try to be a little bit of everything.”

All that really matters, of course, is that Washington is primed and ready to deliver once the playoffs begin.

Last season, the Capitals were pegged as the favourite to hoist the Stanley Cup. This season, it's somewhat of a different story.

“We're not the heavy favourites this year,” offered Fehr. “Maybe we can slide under the radar a bit this time around.”

Anyone associated with Washington, Fehr included, would say that it's a capital idea.