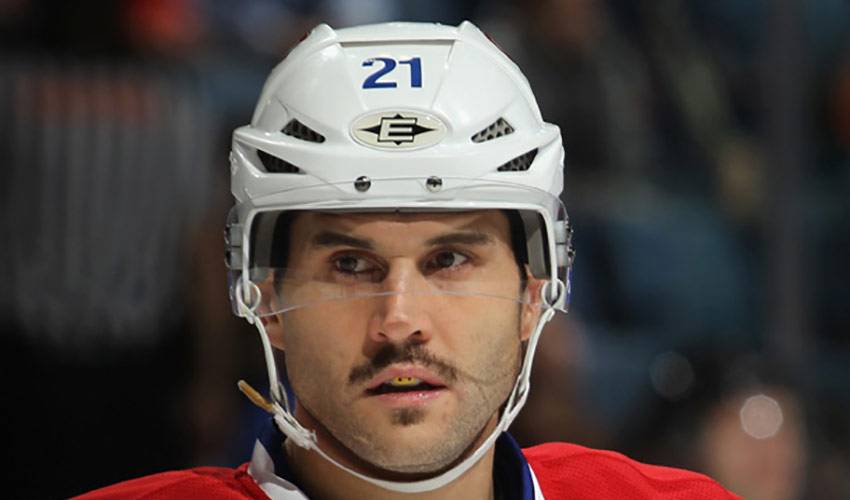 isn't a big talker. But his role as team captain for the Montreal Canadiens speaks volumes about what a leader should be.Brian GiontaWhether it's in the dressing room or on the ice,

Although the news that he had been appointed captain of one of hockey's most storied clubs came out days before the official announcement, it didn't diminish the importance and significance of Gionta taking over the role.

It's been just over a year since he had the ‘C' sewn on his sweater, but for the veteran of nearly 650 regular season NHL games, the honour is still just as meaningful.

“Obviously, it is one of the biggest highlights of my career, to be given such a tremendous opportunity,” said Gionta, who became the 28th player in franchise history to receive the captaincy, in a ceremony on September 29, 2010. “It came as a huge surprise to me. When you look at the players who have worn the ‘C', it makes you shake your head.”{{QUOTE}}

More of a lead-by-example type, rather than stirring up his teammates with fiery speeches, the New York native, who was the 82nd overall pick of the New Jersey Devils in the 1998 NHL Entry Draft, Gionta is hoping this year will see the Habs go further than the first round of the playoffs, after they were sent home after the Eastern Conference quarter-finals in 2010-11.

“There are no easy teams and no easy games,” Gionta told NHLPA.com, one night before he scored the only goal in a shootout, which saw Montreal notch a recent 4-3 road win in Carolina. “Last year, we thought we would be able to go further than we did. That was something on all of our minds this year, too.”

The added pressure of being the captain in a city where expectations are always lofty isn't lost on Gionta. But the 32-year-old isn't fazed.

“We are very lucky to have passionate, knowledgeable fans,” said Gionta, who signed as a free agent with the Canadiens on July 1, 2009, leading the team with 28 goals, including a team-best 10 power-play markers, in 2009-10. “To play in an environment where everyone, from the organization, the players and the fans all want to win, that can only be a good thing.”

While both he and the Canadiens have had to deal with tough starts to the 2011-12 campaign Gionta, who played with Boston College from 1997 to 2001, winning a national championship as Eagles' captain in the 2000–2001 season, is keeping his chin up as Montreal looks to net their fifth consecutive playoff spot.

Gionta also knows just how meaningful each and every point is.

“Every year, it just seems to get tighter in both conferences,” said the 5'7”, 175-pounder, who was a three-time finalist for the Hobey Baker Award as the U.S. Collegiate MVP. “You don't want to put yourself in a tough position early on in the season and you certainly want to at your best later on.”

If his own statistics are any indication of what's in store for Montreal this season, a post-season berth is likely. Gionta hasn't missed out on the playoffs in each of his first nine NHL campaigns, appearing in 93 playoff games while registering 60 points.

“The key is getting there and then anything can happen,” said Gionta, who was twice a member of Team USA at the World Junior Championship (1999, 2000) and also played in two World Hockey Championships (2001, 2005). “That's the focus and that's the way we're looking at things.”

Gionta, who was the 1999 recipient of the Bob Johnson Award for recognition of excellence in international hockey, is very much the same person as he is player.

Even in the moments where some might be rattled, Gionta never panics, instead looking at how he can remedy the situation.

“All I've ever wanted to do is concentrate on what I can do to help the team be a success,” offered the forward, who holds the Devils record for most goals in a season (48 in 2005–06), the team he won a Stanley Cup with in 2003. “There will always be challenges, but there will also be opportunities to turn things around.”

Perhaps his teammate, alternate captain Hal Gill, put it best when he described Gionta as “an even-keel guy.”

A guy who can never be counted out, especially when it matters most.