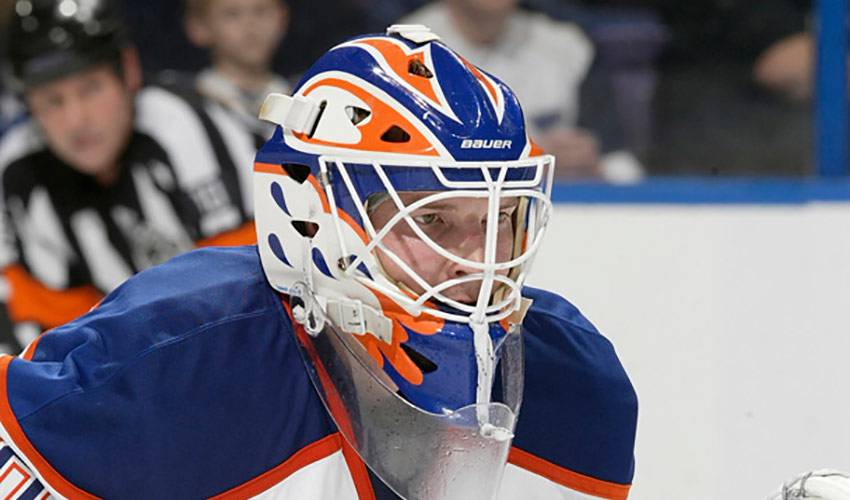 Mounting injuries have taken their toll on the Edmonton Oilers, but as Devan Dubnyk notes, there will be no excuses from a team still focused on landing a playoff spot.

Seeing players in and out of the lineup has been the unfortunate norm for the Oilers in 2011-12, with the club experiencing over 130-man games lost to injuries this season. Last year, the number was 279.

For a team stocked with stellar young talent, in the form of Jordan Eberle, Taylor Hall, Ryan Nugent-Hopkins,  Magnus Paajarvi, as well as veteran savvy, including Shawn Horcoff, Ryan Smyth and Nikolai Khabibulin, a strong start to the campaign has been slowed by a seemingly endless number of ailments.

But in spite of the adversity, no one on the roster is waving the white flag or bemoaning their plight.

“It's frustrating, obviously,” said Dubnyk, who shares goaltending duties with Khabibulin. “Actually, the more you think about it, it's kind of crazy. It certainly has nothing to do with our training staff. They are phenomenal in what they do. We know it's an unfortunate position to be in, but there are no excuses. Every team in this league has to deal with injuries.”{{QUOTE}}

Hungry for a return to the playoffs – the Oilers have finished last in the league the past two seasons – watching players skate in and out of the lineup isn't the formula to reverse those fortunes.

That said, Dubnyk, the 14th overall selection in the 2004 NHL Entry Draft, notes nothing has changed in terms of the team's end goal.

“Our target at the start of the season was to make the playoffs and that hasn't changed,” said the Saskatchewan native, who stepped up and made an impact when Khabibulin went down to injury in 2010-11. “We have more depth than in years past and there is an opportunity now for young guys to come in, make a statement and help us get things back on track.”

Dubnyk, a graduate of the Western Hockey League's Kamloops Blazers, who was named the 2004 Canadian Hockey League Scholastic Player of the Year as the major-junior player best able to combine success on the ice and in school, hasn't resorted to drastic measures to ensure he remains healthy.

At least not yet.

“Maybe I should start wearing my helmet and pads when I go out,” quipped Dubnyk, who played three seasons with Edmonton's American Hockey League (AHL) affiliate, the Springfield Falcons, compiling a 40-75-4 record and setting a club record for most appearances by a goaltender with 62 in 2008-09. “It's just tough to see your friends have to contend with being out of the lineup. They all love to play the game and they all want the team to be a success. All you can do is give them a pat on the back and let them know you're thinking about them.”

As for what he's looking to contribute as the second half of the season looms, Dubnyk, who won his first NHL game on March 19, 2010, recording the first regulation win of his career two days later in a 5-1 victory over the San Jose Sharks, is hoping to be at his best when called upon.

“I'm not someone who is superstitious by nature,” admitted the 25-year-old. “For me, it's more about routine. I like to keep my game simple. There are too many variables every game and you don't want to overthink situations. I want to be intense when I'm in there, but I look at it as being a mix between simplicity and intensity.”

Having the support of his goaltending partner has also been a huge plus for Dubnyk.

“It's been great,” he said, of their relationship. “I consider him a good friend. It's by no means a student/teacher type of situation, but rather two people who want the best for one another.

He's a really good guy to talk to. To have someone like that, someone that genuinely cares about your best interest and wants you to succeed, you really can't ask for more than that.”

The only thing that Dubnyk would ask for, however, is a reprieve from the injury bug that has decimated the Oilers' lineup.

“It's a long season, so you know there will be ups and downs throughout,” he said. “What we've gone through is tough on everybody, but we aren't going to give up. We'll get through it together.”