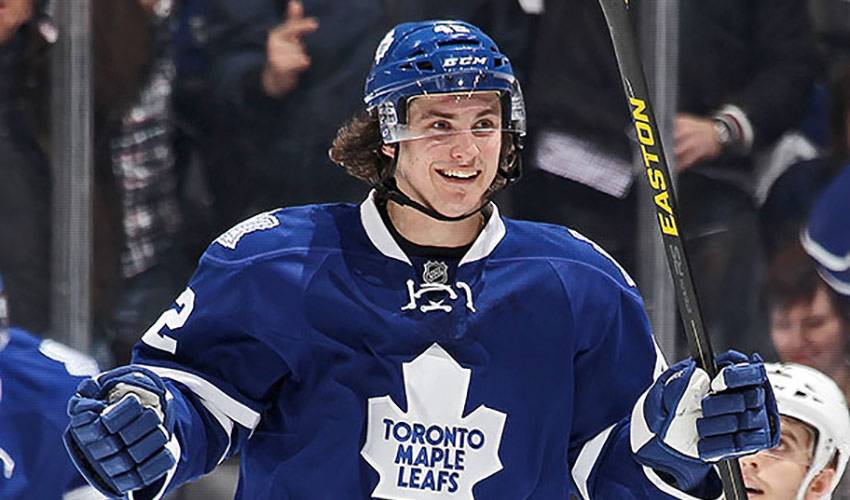 Even with the meter running and on the way out to celebrate his birthday dinner, Tyler Bozak has the time to talk about his two biggest role models.

Sitting in the back seat of a Toronto taxicab, Bozak, who turned 27 on March 19, apologetically notes he has a busy night ahead of him, but is happy to chat before he arrives momentarily at a local restaurant. “Sorry, but I’m trying to get to dinner tonight,” starts the Maple Leafs forward. “My parents are in town and we’re having oysters and then heading to the Air Canada Centre with Phil (teammates Kessel) for the Rihanna concert.” Dinner and a show with his parents, Mitch and Karon, is hardly a stretch for a player that remains as grateful as ever to his ‘biggest backers.’ Early morning drives to practices, flooding the backyard rink well past midnight, or long car treks to minor tournaments – it was a true team effort when it came to the Bozaks and hockey. “My dad coached me pretty much throughout my early time in the game,” remembered Tyler, who played three seasons in the British Columbia Hockey League before joining the U.S. collegiate ranks with the University of Denver in 2007-08. “My parents did pretty much everything to make sure my brother (Justin) and I got the most out of the game. And they did it all without any complaint.” As for who was the better of the Bozak boys on the backyard ice, Tyler plays coy when it comes to his response. “Let’s just say it depends on what brother you ask,” he responded. “I really don’t think it mattered all that much who scored more goals when we were out there. It was more important that we were outside and having fun. We could have stayed out there all night. Sometimes, it felt like we did. It was great to be able to step right outside and the rink was ready to go.” As his career progressed, Tyler, the Red Baron Western Collegiate Hockey Association (WCHA) Rookie of the Week four times, an All-WCHA third team an All-WCHA Rookie Team selection after his first campaign with the Pioneers, maintained his close relationship with his family. When he scored his first NHL goal, on January 14, 2010, they were in the stands. “That moment would stand out, at least so far, as the one that I was happiest to share with them,” said Bozak, who posted 27 points in 37 games with the Maple Leafs in 2009-10. “You think about all the sacrifices they made for you, all the unselfish acts, and the support. So, to be able to have them in the stands that night was something I’ll never forget.” Bozak also never forgets to call home for some fatherly advice after a game. Well, at least most of the time. “I appreciate my dad’s insight and thoughts when we play,” offered the forward, now in his fourth NHL campaign. “I pick up the phone after every game we play…or should I say almost every time. Sometimes, there are those games where you don’t feel like talking about it.” As for what father and son would speak about after the Rihanna concert, Bozak was thinking more in the short-term. “For starters, I’ll make sure he doesn’t have a wandering eye at the concert,” quipped Tyler. “Really though, it’s always great to be able to spend time with my parents.” It’s something Tyler Bozak is certainly accustomed to.