A Boost for Bozak 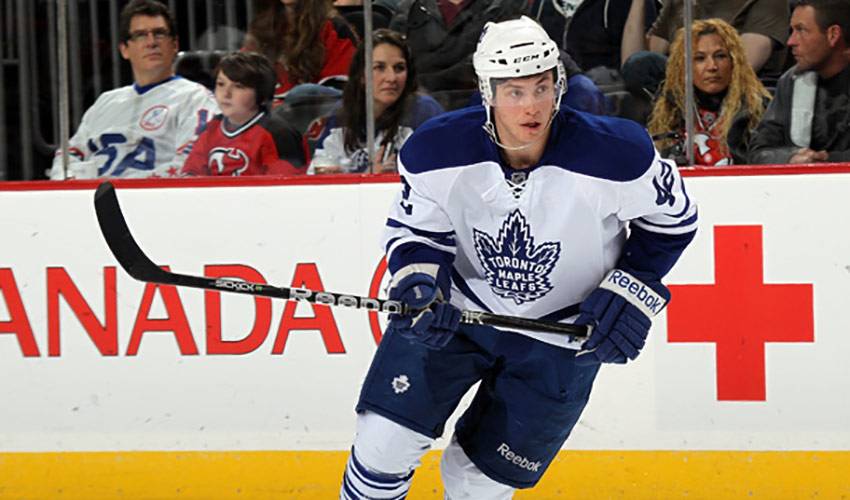 , a little confidence has indeed gone a long way.Tyler BozakFor

In many regards, Bozak's 2010-11 NHL campaign mirrored that of the Toronto Maple Leafs, equal amounts of highs and lows, but a season that hinted this year could be one of full of promise for the Original Six squad.

“Last year had lots of ups and downs for me,” said Bozak, an undrafted forward who signed a two-year, entry level contract with the Toronto Maple Leafs on April 3, 2009. “But I really liked the way we finished the season. We stayed in the hunt for a playoff spot and got a taste of what it takes to get there. We came up short, but with what we learned, it should serve us well this year.”

For Bozak, who was called up by the Maple Leafs on October 13, 2009, making his NHL debut the same night against the Colorado Avalanche, recording his first NHL point, an assist on a goal by Francois Beauchemin, it was a season of both good and bad, but one that ended on a high note.

“I was able to find away to stay composed and confident even in tough times,” offered Bozak, who scored his first NHL goal against the Philadelphia Flyers on January 14, 2010. “Confidence really is such a big thing. Even when you struggle, you have to work harder than ever. But I finally felt really good about things by the end of theseason.”

The native of Regina, Saskatchewan appeared in all 82 games, scoring 15 goals and adding 17 assists, including his first career two-goal game, on January 1, against the Ottawa Senators as part of a 5-1 win.

He points to teammate and friend, Phil Kessel, as a huge factor in his development and comfort level on NHL ice.

“There are lot of guys who have really helped me along, but Phil would be the main guy,” said Bozak, of Toronto's skilled centreman . “When questions were being asked during tough times, he was always there for me, always in my corner. He stood beside me which I really appreciated. That meant a lot to me.”

Bozak is certainly no stranger to success, sometimes in the face of adversity.

He began playing in the British Columbia Hockey League (BCHL) for the Victoria Salsa (later known as the Victoria Grizzlies) in the 2004–05 season. He spent three campaigns in the BCHL with the Victoria franchise. In his final season, he registered 128 points (45 goals and 83 assists), and was awarded the Brett Hull Trophy as the league's Top Scorer.

In mid-December of 2006, the University of Denver Pioneers announced Bozak had signed a letter of intent to play hockey for the school. He joined the Pioneers for the 2007–08 season.

In his freshman year with the club, Bozak appeared in all 41 games and led the team in scoring with 34 points (18 goals and 16 assists). He was also second in the country with five shorthanded goals.

Prior to his sophomore season with Denver, Bozak was named to the College Hockey News Preseason All-America Team. In December of 2008, he suffered a left knee injury in a game against Minnesota State, causing him to miss more than half of the Pioneers season. Despite missing significant time, he was named to the All-WCHA Academic Team.

“You always dream of playing in the NHL and I was lucky enough for it to happen,” said Bozak, who signed a two-year contract extension with Toronto on July 5. “I want to make this season my best one.”

Recalling a particular game from 2010-11might serve as inspiration.

“I had a slow start, but right after the All-Star break, we had a game in Montreal and I scored two goals, both set up by Phil. We definitely saw something click during that game, how we were really on the same page. Even in the pre-season this year, I feel a lot better.”

It appears Bozak's not the only one coming into the campaign with a winning attitude.

“Everyone in the room wants to make the playoffs so bad,” said Bozak. “There is a really good feeling in the room.”

One that Tyler Bozak happens to know all about.