Dorsett motivated along road to recovery

Each Tuesday, Derek Dorsett is greeted by the familiar sound on his cell phone, a weekly reminder of the date he underwent surgery. And every time the 30-year-old hears that ping, it inspires him to find his way back onto the ice and to the game he loves. 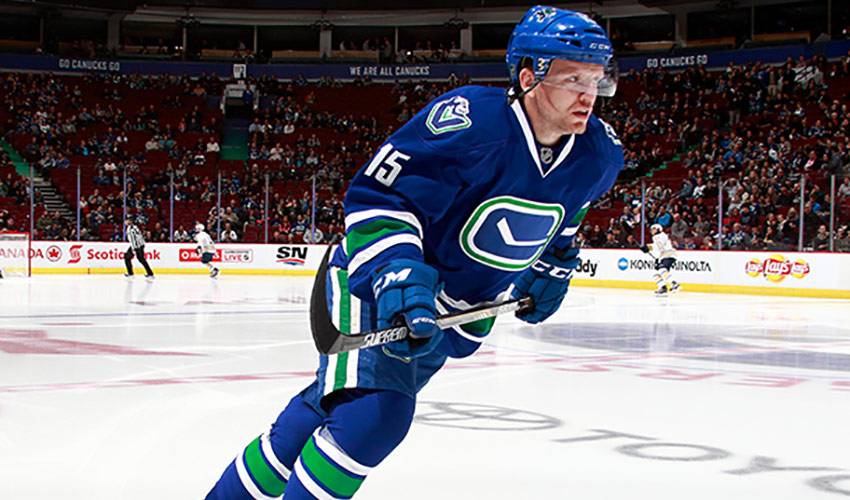 Each Tuesday, Derek Dorsett is greeted by the familiar sound on his cell phone, a weekly reminder of the date he underwent surgery. And every time the 30-year-old hears that ping, it inspires him to find his way back onto the ice and to the game he loves.

“In my phone, I have a calendar,” noted Dorsett, in his third season with the Vancouver Canucks. “And every Tuesday, it reminds me of the day I had my surgery. Today is eight weeks. And next Tuesday, it will remind me again. I have it set up that way.”

In early December, two weeks before Dorsett’s birthday, the Canucks announced the winger would have a procedure done to repair a disc degeneration in his neck.

Not long after, the Saskatchewan native took to Twitter, posting a smiling photo of himself wearing a neck brace, accompanied by words of praise for the medical team who performed the surgery at the spine clinic in Los Angeles.

(1/3) Been a tough week with a hard decision for surgery but would like to thank the @Canucks org, teammates and fans for all the support!

(2/3) Want to send a huge thanks to Dr. Watkins Sr./Jr. & the rest of the staff at @MDRHospital for the great care. pic.twitter.com/en5RNToYmw

(3/3)Can't wait to start rehab and be 100% healthy and ready to play again. Going to miss being on the ice and competing with my teammates.

In an official team news release, Canucks general manager Jim Benning was quoted as saying, “Derek is an important member of our team and we are confident in a full recovery.”

“The support I’ve had from my Canucks teammates and the organization has been great,” said the 189th overall draft pick of the Columbus Blue Jackets in 2006. “The message is to take care of this and get back when the time is right. That made the decision to do the surgery much easier.”

Still, admittedly, it hasn’t been easy for Dorsett to sit on the sidelines, cast into the role of spectator instead of participant.

“For a bit there, when it first happened, after the surgery, it was a little bit harder to watch the games,” said the veteran of 495 NHL regular season games. “Obviously, I was watching everything on the ice, but I wasn’t getting too wound up. The last little while, it’s been a lot of fun. The guys have been playing hard and picking up points. It’s fun and it’s exciting to see that. Any time you’re winning and playing for a purpose, it’s easier to have that passion going.”

It’s also more tolerable, Dorsett noted, when you have the opportunity to be around your teammates.

Support since the surgery has come from expected sources along with some unexpected ones.

There have been a few occasions where Dorsett, walking the halls of Rogers Arena, has run into a rival player that he’s never met before.

You won’t hear any trash talk in those exchanges.

“At the rink, guys coming through town will see me in the hallway – guys I didn’t play with or even know – and they wish me well, tell me to heal up and get back out there,” said Dorsett. “The support from the entire hockey world has been great. It’s been the same thing from all my family and friends, too.

“Obviously, it’s something you never want to see any player go through. With an injury like this, it puts a lot of things in perspective.”

Two months after the surgery, Dorsett is buoyed at being able to do more and more each day. His most difficult challenge is resisting the urge to try and speed up the process.

That’s hardly an easy task for a player whose game is built on tenacity and physicality.

“It’s amazing how the surgery works,” offered Dorsett. “I had it done and I was walking that night. The next few days, there was stiffness and soreness, but the last six weeks – it’s been eight weeks today since I’ve had the surgery – it feels like I almost didn’t have a procedure done because I feel good. But, that’s where you have to be cautious. I joked with a couple guys recently and said, ‘Hey, I think I can start playing.’ But, I’m definitely not that close.”

The player known for always answering the bell knows he has plenty of people in his corner.

Walks down Vancouver streets are just one reminder of that.

“The first six weeks, I was wearing a neck brace – I’m a guy who kind of blends in, not a very recognizable person – but people that usually do recognize me think I’d be bigger than I am. I don’t typically get recognized, but it’s pretty hard to blend in, especially in the Vancouver market, with a neck brace. Everyone gives me well wishes, saying that they miss me and hope I can get back out there soon. That means a lot to me. It’s been good. I got the neck brace off a couple of weeks ago, so I’m back to blending in again.”

Dorsett is counting down the days until he can stick out on NHL ice.

“I hope to be skating at the three-month mark, but no contact,” he said. “It’s a process. The start of next season is when I want to be 100 per cent and back playing. Everything is going in the right direction, but it’s a long road.”

He’s comforted in knowing he won’t have to walk it alone.