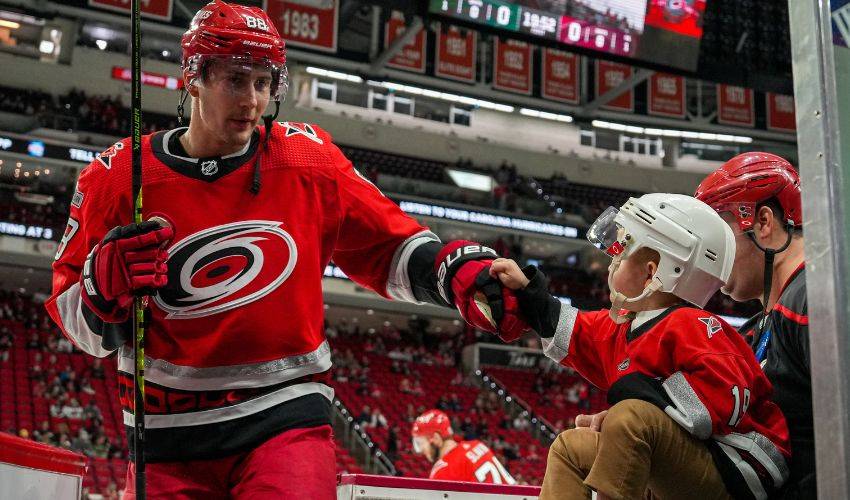 Martin Necas has plenty of goals when it comes to his hockey career. Playing until he is 50 isn’t one of them.

Mention the name Jaromir Jagr to the 24-year-old, who is in the midst of a breakout campaign with the Carolina Hurricanes, and the Czech-born forward serves up a long list of praise for the fellow countryman and all-time hockey great.

Jagr, now 50, is still playing the game, suiting up with the Kladno Knights, the Czech Extraliga league team he owns. The Hall of Famer, who played 24 NHL seasons, won two Stanley Cups and has received a slew of individual awards (including three Ted Lindsay Awards), remains an icon in his homeland.

While Necas would love to emulate some of Jagr’s successes, duplicating the unique path and longevity of one of his role models is not in the cards.

“There is no chance,” he said with a laugh. “I don’t know how he’s able to do it, but it’s amazing. No one knows how it’s possible. It’s passion. He loves the game. I really looked up to Jagr and I still do. He’s a legend here. Wherever he would go in Czech, I think he could have been the president. I would always watch him play in the NHL and see his highlights, and then try to be like him. I saw him play in a lot of charity games when I was kid, and now he’s still playing. That’s really unbelievable.”

Growing up in Nové Město na Moravě, a town of 9,800 people, Necas was a multi-sport participant from an early age before he made hockey the sole focus.

Nové Město na Moravě, known as a premier winter sports destination, was the ideal place for Necas to explore those different athletic endeavors.

“It’s a place where there is so much to do if you love sports. A lot of people come to ski and there is always a big ski competition every year. When I was younger, I would go and watch. My dad used to cross-country ski when he was younger and then I did that too. I was about 12 or 13 when I decided to play hockey, but I played tennis and soccer as well. There was never time off. If I wasn’t playing hockey, I was playing tennis or soccer. Most of the kids in Czech play different sports and they pick one that they want to continue with.”

The skills he learned from each sport had a major influence on his hockey life.

“For sure. In soccer, you need a lot of stamina and precision. In tennis, it’s hand-eye coordination, a lot of running and short sprints, which really helps you in hockey.”

Necas left home at 15 to further his hockey development, suiting up with HC Zdar nad Sazavou and HC Kometa Brno in 2014-15, while also representing Czechia on the international stage.

Drafted 12th overall by Carolina in 2017, he made the Hurricanes’ season-opening roster in 2017-18 but played only one game before being returned to Brno in the Czech Republic, where he helped his team win its second straight league championship.

Necas played most of the 2018-19 season with Charlotte of the American Hockey League and scored his first NHL goal against the Tampa Bay Lightning on October 16, 2018. He then returned to Charlotte and helped the team capture a Calder Cup.

“When I got here, to North America, you miss a lot from home. But I was away from my hometown since I was 15, so you learn to adapt. I think the biggest thing my first year here was learning the language. I had a lot of help from teammates. I just listened and learned as much as possible. You can watch TV or a movie and pick up things that way too. You just keep working at it, and you can see the results.”

Necas has felt the love from Hurricanes fans and teammates, who pushed hard to have him voted into the upcoming NHL All-Star Game. He even got an assist from North Carolina Gov. Roy Cooper.

While those efforts fell short, the centre, who has served as captain for his country at several tournaments, is grateful for the widespread support, both in North America and Czechia.

“My family and the fans back in Czech – the people love hockey there – they have definitely supported me over the years. My teammates and the fans here have done the same and I really appreciate that. I don’t think there’s any way I can play at 50 like Jagr does, but I love the game and I hope that shows.”

And while an NHL All-Star appearance may not be in the cards for Necas this season, he is certainly stating his case for future years by already tying and surpassing some of his NHL bests so far this season.