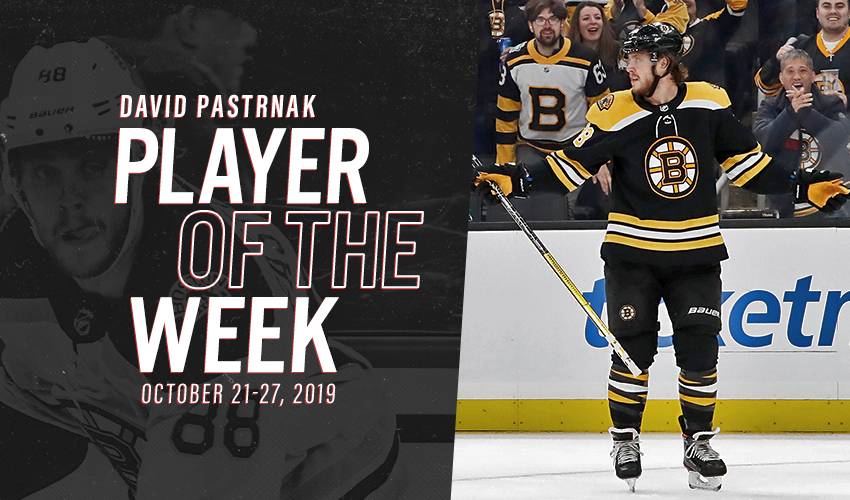 Pastrnak recorded five assists in a game for the first time in his career and extended his point streak to nine games, totaling 23 points over that stretch.

A chance at continuing his scoring streak or give Patrice Bergeron the chance at a hat trick.

Pastrnak chose the last one. pic.twitter.com/jMCbyOtCIl

Pastrnak scored his league-leading 10th goal of the season in the Bruin’s 4-2 win over the Toronto Maple Leafs at TD Garden Tuesday.

After having a goal called back on an offside challenge in the first period, Pastrnak went between the legs in front of the net and put the puck past Michael Hutchinson, which helped extend his point streak to six games.

He also tallied his 300th career point in what was his 329th NHL game, joining Barry Pederson, Bobby Orr, and Ray Bourque as the fourth player in Bruins history to score 300 points in less than 350 games.

Later in the game, Pastrnak set up linemate Brad Marchand with a nice spin pass and the winger scored on a wrist shot to extend his own point streak to eight games.

In a rematch of the 2019 Stanley Cup Final, Pastrnak scored an NHL-leading 11th goal Saturday to lead the Bruins to a 3-0 win over the St. Louis Blues at home.

Pastrnak extended his point streak to eight games and his goal-scoring streak to five games. He is also the eighth player in the last 27 years to score 11 goals in his team’s first 10 games in a season.

Showing no slow down playing in the second of a back-to-back Sunday, Pastrnak put up five assists in the Bruins’ 7-4 win over the New York Rangers at Madison Square Garden.

The NHL’s leading scorer extended his point streak to nine games, while he and Marchand (2-3–5) became the fourth and fifth players this season to reach 20 points. Pastrnak and Marchand also became just the third duo in Bruins history to have five points in a game.

Pastrnak and Marchand required the fewest games for a Bruins player to reach the 20-point mark  since Adam Oates also did so in 11 games in 1992-93.

Off to a blistering start to the season averaging a goal a game, Pastrnak has his sights set on reaching a special benchmark for the first time in his career.

“I really don’t try to think about it, but I want to be a 50-goal scorer,” Pastrnak told Joe McDonald of The Athletic. “I wouldn’t say it’s stuck in my head like I have to, but I know I can.”

For now, Pastrnak will try to retain his scoring lead when the Bruins play their next two games at home against the San Jose Sharks Oct. 29 and the Ottawa Senators Nov. 2.