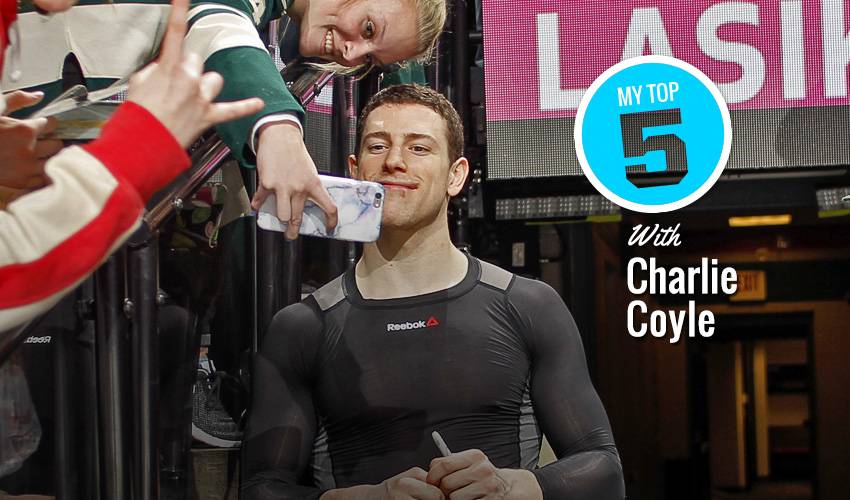 From a former teammate handing over his laptop mid-flight and introducing him to a TV series he’d never seen, to an animated comedy that he can’t get enough of, Charlie Coyle’s favourite small-screen shows always keep him coming back for more.

“I’m a big fan of Prison Break. It’s my No. 1. The first season was unbelievable. I really enjoy watching that show.”

“I’m a big Family Guy guy. I’d probably say that Peter is my favourite character. That’s one of the shows where when you just want to unwind and relax, not really think about anything – Family Guy is an easy, funny watch and you have a good laugh. It’s perfect for that.”

“One that I’ve been loving lately is Shark Tank. I don’t know what I like about it. It’s on a lot now and I started watching it. I just kept tuning into it and loving it. That one’s up there right now. If I had to go on there and pitch something – it would depend on what we’d be pitching – I’m closest with Jason Zucker, so we’d probably would make a good duo. I don’t know if they’d invest with us because I don’t know what the heck we’d do, but he’d be the guy I’d pick.”

“I like watching Impractical Jokers. Those guys are hilarious. That’s a funny one. It’s so awkward what they do, but it’s funny. I really like that show.”

“Entourage, I really enjoy it. But I was so late to that party. I remember we were on the plane two years ago and Jordan Schroeder, who used to play with us, was watching it. I asked him what he was watching and he told me it was Entourage. I told him I’d never seen it and he just looked at me and said, ‘You’ve never seen it?’ He immediately stops it mid-episode and hands me his laptop and says, ‘Start watching it right now.’ I loved it.”