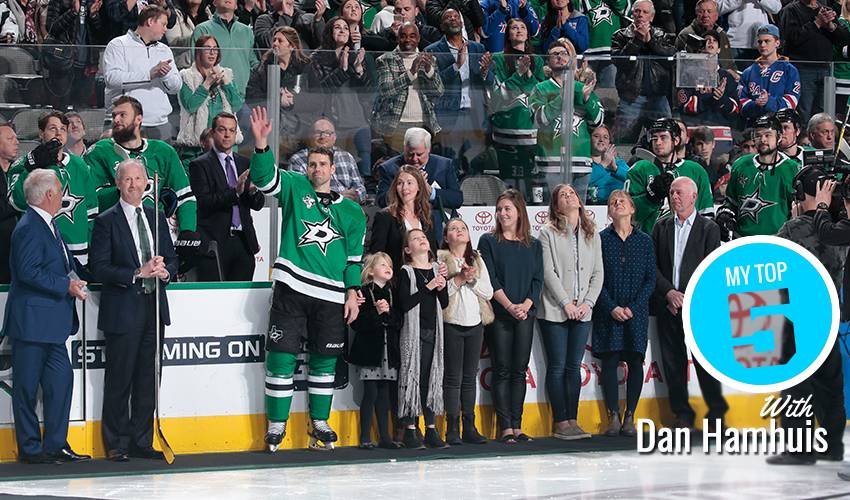 Aside from the 1,000 games-played milestone he recently reached, veteran defenceman Dan Hamhuis found five other memorable career highlights to offer up, including a golden moment from four years ago.

While he was in the midst of planning a Super Bowl party that he hosted, the native of Smithers, British Columbia found a few minutes to look back on some of the big hockey moments he’s experienced so far.

What made his list? There’s one milestone moment he wasn’t quite expecting – until he heard someone call out his name.

“Winning gold four years ago in Russia would be No. 1. To be able to represent your country and to win it all is something you’ll never forget. It was a great experience.”

“I knew that I was going to be on the roster for the night. But I wasn’t sure if I was going to get a shift in the game. I thought I might be sitting on the bench the whole night. It was about three shifts in and I got my name called. I remember that moment very clearly, hearing my name called and I was actually going to go out on the ice. So, that was pretty exciting.”

“We went undefeated. Jason Spezza and I, we got some personal redemption in beating the Russians in the gold medal game. They had defeated us in gold medal games two or three times before.”

“Playing for the team I grew up as a kid was a very special experience. It was a lot of pride playing on a team that means so much to the province and that meant so much to me as a kid. It was special to put that jersey on.”

“I would say that whole season with Vancouver, winning the Presidents’ Trophy and going to the Stanley Cup Finals. Of course, I remembered that 1994 playoff run Vancouver had when I was in the prime of my childhood – I think I was about 12. I was a big fan of that team.”