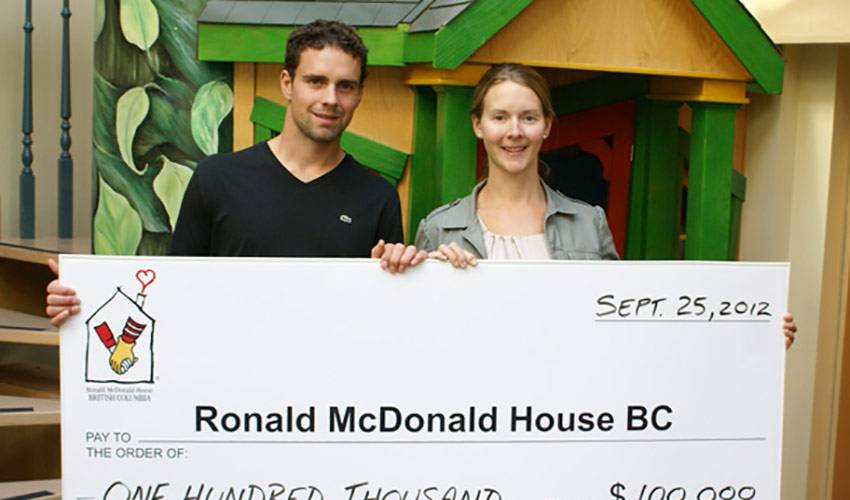 At 74,000 square feet, the new 73-room House will be the second largest Ronald McDonald House in Canada. Located on the campus of BC Children’s Hospital, the House will ensure that families are always close to their children and the life-saving treatment they need.

While playing hockey in Nashville, Sarah and I started working with RMH and really enjoyed meeting and supporting the families that came through. When we moved to Vancouver it was a natural fit for us to stay involved working with RMH, said Dan Hamhuis, a B.C. native and NHL player.Growing up in northern communities in B.C., my wife and I have seen first-hand the help Ronald McDonald House BC has provided to friends of ours. We are excited to contribute to a new RMH that will serve many more families for years to come."

The new Ronald McDonald House BC is made possible by the It’s Time Campaign, a multi-year fundraising effort. Launched with a matching grant from the BC Government in 2011, and led by RMH BC Board member Gary Segal, the campaign is inviting donations from individuals, foundations, and businesses in order to raise the remaining $4.5 million of the $28.8 million total project cost.

While my family fortunately, has not needed the use of this vital service, I know how much it truly means to those that do,” says Segal, also a noted philanthropist. “Contributions to this crucial expansion will have a lasting impact on the lives of BC’s sick children and their families for generations to come.

Construction of the new Ronald McDonald House BC will begin this Fall, with completion slated for January of 2014. Established in 1983, Ronald McDonald House® BC & Yukon is a vital resource to the residents of BC, Yukon and Western Canada. RMH BC is a home-away-from-home for children requiring medical treatment at BC Children’s Hospital, and for their families. Ronald McDonald House eases the emotional and financial strain of being away from home and allows families to fully concentrate on giving love and support to their children.