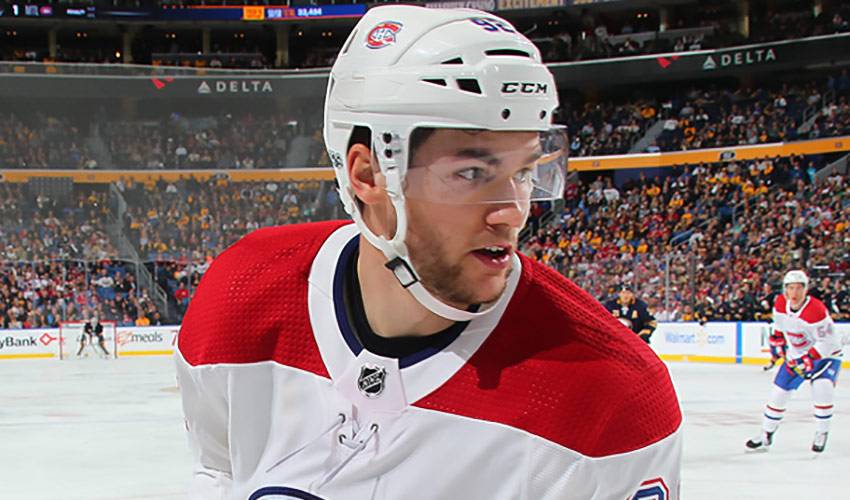 He hadn’t played a game in Habs colours yet, but the buzz amongst Jonathan Drouin’s teammates was already in high gear.

News of the trade – the one that happened on June 15, 2017 – spread quickly players between players on the Montreal roster.

In the aftermath of the deal that brought Drouin, one of the game’s most dynamic offensive stars, to the Canadiens, Brendan Gallagher, in British Columbia at the time, reached out to the forward.

The right winger was one of many players who did.

“I sent him a text when he was traded, just to let him know that we’re really excited to have him,” said Gallagher. “He’s really excited to play for the Montreal Canadiens. Being French-Canadian, you can’t even imagine what it would feel like to put that sweater on for the first time.”

Drouin was on his way to play a round of golf when he received word of the trade.

Soon after, he was at a press conference to talk about the deal that brought from him from Tampa Bay to Montreal.

“It's surreal,” admitted Drouin. “I’m a hometown boy. You don't really think that day's going to happen then you realize you'll be playing for the Canadiens. I'm still kind of in shock that it happened."

Shocked, but ready to embrace the challenges that come with playing in one of hockey’s highest profile markets.

"There's obviously a lot of pressure playing in Montreal, everybody knows that," Drouin said. "But for me as a player I think I'd rather have that pressure on myself [here] than some other places. I'm French-Canadian and I'm going to thrive on that pressure. I like that stuff. I've played at the Bell Centre many times as an away guy. Being on the home side will be even better."

He couldn’t have scripted his first game with Canadiens any better.

The 22-year-old scored the lone shootout goal in Montreal’s regular-season opener, a 3-2 road win against Buffalo.

For the night, Drouin had one assist, five shots on goal and dished out one hit in 20:05 of ice time.

“It shows you the kind of skill level he's got,” Canadiens coach Claude Julien said about the third player selected in the 2013 draft.

Something his new teammates were well aware of long before those first game heroics.

“I know how much he is looking forward to playing that first game at the Bell Centre,” said Gallagher. “He’s a very talented player and everyone is happy to have him the mix.”

Which is far better, Gallagher admits, than being tasked with keeping Drouin at bay.

“He’s not one of those guys that bugs you with his mouth,” offered Gallagher. “He bugs you with how skilled he is. When he has the puck, he protects it so well. He’s not going to lose it. His speed and awareness makes him tough to play against. He’s going to help in many ways.”

Sonnet Insurance and NHLPA team up

Sonnet’s partnership throughout the 2018-19 NHL season will show a new side of fans’ favourite players.

In this week's Player Q&A, it's clear that Jonathan Drouin is a Montreal guy through and through.