A late-round draft pick of the San Jose Sharks, Jason Demers, now with the Arizona Coyotes, has played in over 500 regular season NHL games. There have been more than a few memorable moments the former Quebec Major Junior League star has experienced, including a career first on November 15, 2009. 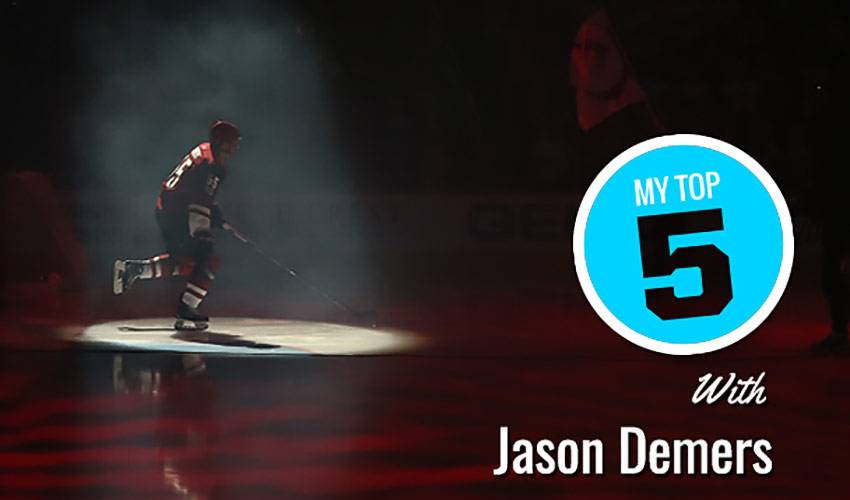 A late-round draft pick of the San Jose Sharks, Jason Demers, now with the Arizona Coyotes, has played in over 500 regular season NHL games, earning a reputation along the way as a steady and reliable force on the blue line.

There have been more than a few memorable moments the former Quebec Major Junior League star has experienced, including a career first on November 15, 2009. Here are his top five, in no particular order.

“When you hear your named called at the Draft (208th overall in 2008), it’s an amazing feeling, but it’s even better when you get to share it with your friends and family. It’s what you’ve worked hard for and hoped for, and when it finally happens, you feel like you’re on the top of the world.“

“You dream about playing your first NHL game for as long as you can remember. And when it finally happens, it’s just about the best feeling you can have. You’re nervous and you’re excited, but it’s a big thrill.”

“Scoring your first NHL goal (November 15, 2009, against Chicago) is another thing you always dreamt about when you were a kid. Obviously, it’s a great moment, something you know you’ll always remember for a long time.”

“It was a huge deal for me. Just coming where I came from and the path I’ve taken. It hasn’t been the easiest at times. You cherish that process and it makes you appreciate the moment even more. It was cool to do it in Montreal with my family there.”

“When you were young, you would see the intensity that comes with the Stanley Cup Playoffs, just how much the players have to elevate their game, and all the ups and downs that happen throughout a series. And when you get that chance to experience it, you realize just how intense it really is.”