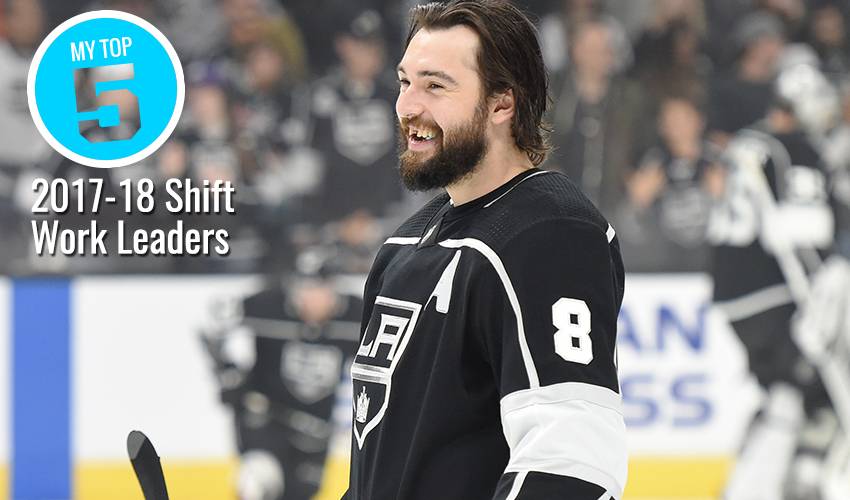 Who jumps over the boards the most so far in 2017-18? This week we take a look at the five players (all defencemen) that lead the way when it comes to most total shifts taken.

Hint: There are two pairs of teammates – one from East, one from the West – on the list, while the player who holds the No. 1 spot has a pair of Stanley Cups to his name.

A two-time Stanley Cup champion with the Los Angeles Kings, Doughty leads the NHL in total shifts, time on ice per game (27:16) and shifts per game (32.0). The 2016 Norris Trophy winner is one goal away from 100 for his career.

Arizona’s durable defenceman is a two-time 20-goal scorer that’s often tasked with taking on the other team’s top players. The 26-year-old Swede is averaging 24:22 minutes of ice time per game and sits 29 points away from 300 for his NHL career.

The veteran blueliner, who began his NHL life in 2009-10, is playing the most minutes per game (21:58) of his big-league career. The 29-year-old native of Dorval, Quebec, just 13 points shy of the 200 mark, has one game-winning goal so far this campaign.

As steady as they come, Toronto’s young defensive star is well on pace to eclipse his career-high in points (36) and assists (27). Averaging a shade over 22 minutes of ice time per game, four of his five goals have come at even strength.