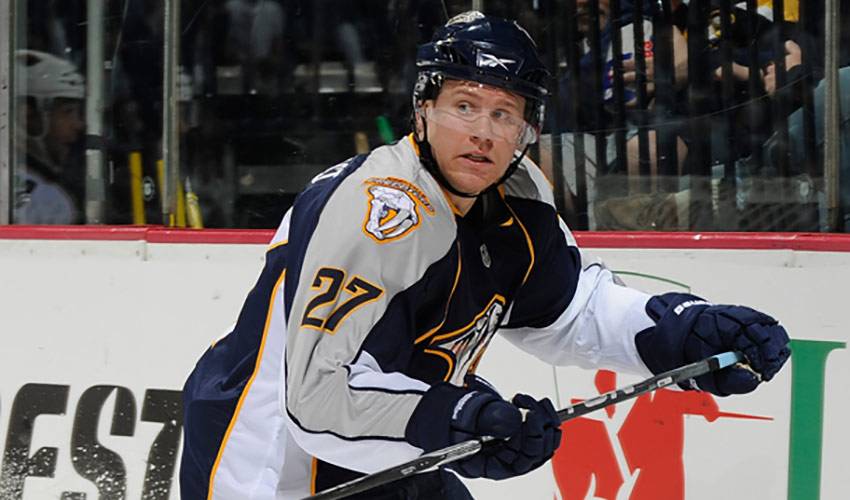 Patric Hornqvist likes to set up shop where not all dare to go, a spot that requires him to do battle with defencemen, goaltenders and at times, his own teammates. But there's no place the Nashville forward would rather be.

Irate goalies, whacks to the back of his legs and heavy slapshots buzzing in from the blueline – it's all part of a night's work for one of the National Hockey League's breakout stars in 2009-10.

And while standing in front of the opposition's net is far from a luxury, Hornqvist, in his first full NHL season, has become quite skilled at the art of taking up residence in the front of the crease, even if it doesn't make him the most popular player on the ice.

“I don't think so,” Hornqvist said with a laugh, in admitting he's far from a goaltender's best friend. “I do things they probably don't like. But it's my type of game. I get in front of the net and either try to tip the puck in from the point, bang in a rebound or shoot in a one-timer from my teammates.”

Hornqvist's approach has paid off handsomely for both himself and the team.

The 23-year-old's rise to stardom has him on the cusp of a 30-goal campaign and helped put the Predators in position for a solid run at netting their first Stanley Cup championship.

Selected by the Predators with the final pick (230th overall) in the 2005 NHL Entry Draft, Hornqvist scored 41 goals in his last two seasons for Djurgårdens IF of the Swedish Elitserien, resulting in Nashville bringing him to North America for the 2008–09 NHL season.

Hornqvist appeared in 28 games before he was assigned to their minor league affiliate, the Milwaukee Admirals of the American Hockey League, where he spent most of the year.

That wasn't going to be the scenario in 2009-10, especially after Hornqvist's impressive start to the campaign, one that saw the right-winger front and centre in Nashville's home opener.

“It was our second game of the year and I missed a breakaway,” recalled Hornqvist. “I was disappointed, but I was able to score a power-play game that tied the score at 2-2.”

He wasn't finished. Hornqvist redirected defenceman Shea Weber's shot from the right circle at 14:48 to put the Predators ahead to stay.

“It was a good night and it gave me a lot of confidence,” said Hornqvist, who had an assist in Nashville 3-2 shootout victory over the Dallas Stars in their first game of the 2009-10 season. “You remember those moments because they do a lot for how you feel about yourself.”

Hornqvist hasn't missed a beat since then.

But for all of the success he has enjoyed, the 5'11”, 188-pounder is only too happy to acknowledge the impact that his teammates and linemates have had on his strong year.

“We have great belief in one another and we work for one another,” offered Hornqvist. “That's how we approach every game. We think we are capable of getting two points every night. The year that I am having is something I'm very happy about, but it's the guys I'm playing with who have helped it turn out that way.”

A sure sign of the mutual respect Hornqvist and his linemates have for one another can be found even when they're not on the ice.

“We talk to each other on the bench before and after every shift,” he noted. “We all want to be on the same page.”

And Hornqvist, who hails from Sollentuna, Sweden, the same hometown as future Hall of Famer Mats Sundin, wants to nothing more than to keep contributing to Nashville's fortunes.

“We have all the parts in place, so hopefully that means we can have a strong playoffs,” offered Hornqvist, who lists former NHLPA member and Swedish hockey legend Peter Forsberg as his hockey idol. “You never know what can happen. I think a lot of teams feel the same way. It's going to be a big challenge, but a fun one.”

Which is precisely how Hornqvist sees his on-ice style, one that puts him in the line of fire each and every night.

“When I'm in front of the net, I don't think about what will happen. With a guy like Shea on the blueline, his shot could go right through you. I have to admit when you watch the video of the games on TV or see the highlights, that's when you realize just how much of a bomb he has from the point. But I'm just focused on doing what I need to do. I really enjoy the game and I really enjoy my role.”

With the net gains he's delivered, why shouldn't he be?