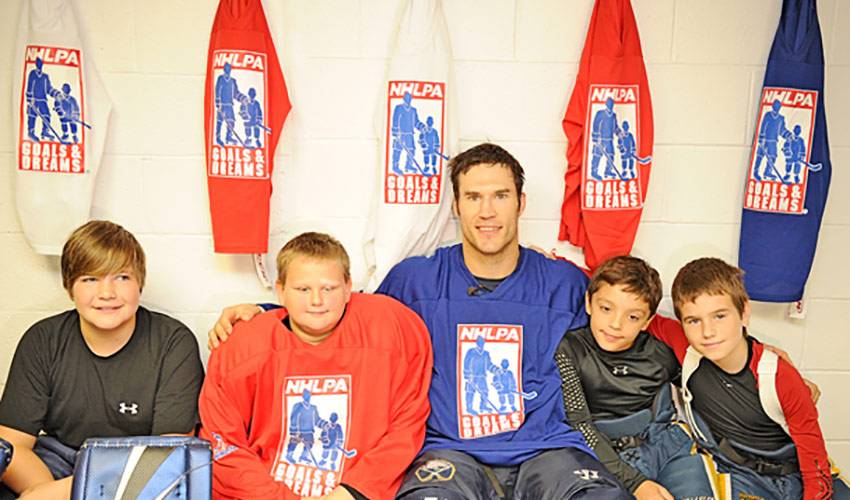 It's not just the people of Dundas, Ontario, who feel they've scored big with Kraft Hockeyville coming to town.

A Canadian reality television series developed by CBC Sports and sponsored by Kraft Foods, the National Hockey League Players' Association and the NHL, in which communities across Canada compete to demonstrate their commitment to the sport of ice hockey, Kraft Hockeyville continues to grow in popularity.

Just ask the NHLPA members who will take part in the annual Kraft Hockeyville exhibition game, slated for September 28.

“This is an ideal way to give our fans across the country a chance to see our great game up close and personal,” said Chris Phillips of the Ottawa Senators, whose teammates will face-off against the Buffalo Sabres in Dundas. “I know the guys on our team are really looking forward to this unique opportunity to play in a town that truly loves their hockey.”

Fellow defenceman Steve Montador, who will begin his second season with the Sabres, concurs.

“I feel fortunate to have the chance to play in a great place like Dundas,” said Montador. “It's a wonderful concept, one that means a lot to the players. People in these communities are as passionate about the game as anyone, and being out of our element is a benefit to the players and hopefully to the people of Dundas.”

Selected from the more than 12,500 submissions, the community of about 25,000 located northwest of Hamilton will host the Senators and Sabres at the J.L. Grightmire Market Street Arena.

The Kraft Hockeyville competition gives communities across Canada the opportunity to show their hockey spirit and community pride for the chance to experience the excitement of an NHL game first-hand from their local arena.

To date Kraft Canada has donated over $620,000 in arena upgrades.

“Every year, this event builds and builds,” said Jack Hewitt, Vice President, Marketing Services for Kraft Canada. “The sense of pride is simply amazing. In many ways, it's not just about winning the prize, it's about coming together and heightening the awareness of community.”

"I know, from speaking with the players over the years, that this unique event means a great deal to the all of them,” said Devin Smith, Chairman, NHLPA Goals & Dreams fund. “The chance to play in front of appreciative fans, in places that live and breathe hockey, is one the players truly look forward to."

Hewitt is grateful for the support of the NHLPA and its' members.

“We have a great relationship with the NHLPA and the players,” said Hewitt. “There are so many great memories of the players interacting with the fans. In our first year in Salmon River, the players had to get dressed at a high school and make their way to the rink. Mike Ribiero absolutely loved it. The players would stop and sign autographs with kids and shoot tennis balls with them. They never hesitate to get involved.

“Jon Sim has been involved in three Hockeyvilles,” continued Hewitt. “In North Bay, during one of the intermissions, he stopped me and said, ‘On behalf of the players, thank you for letting us be part of this.' It was completely genuine. That's why we feel very lucky to have the support of the players.”

The inaugural 2006 season of Hockeyville was won by the community of Salmon River, Nova Scotia on June 11. Salmon River's entry, the "Deuville Rink", beat 450 other entries from across Canada.

The NHL exhibition game was held September 25 at the Colchester Legion Stadium in the neighbouring town of Truro (the Deuville Rink being too small), as the Montreal Canadiens beat the Ottawa Senators 7-3.

Last year, Terrace played host to the Vancouver Canucks and the New York Islanders , a game that saw the Canucks best the Islanders by a score of 2-1.

“I know everyone involved is looking forward to this,” offered Hewitt. “We've asked guys to go to high schools in the communities where the games are played and none of them have ever hesitated. They can identify with the kids, regardless of how old they are. This year should be just as memorable as the past Hockeyville experiences.”