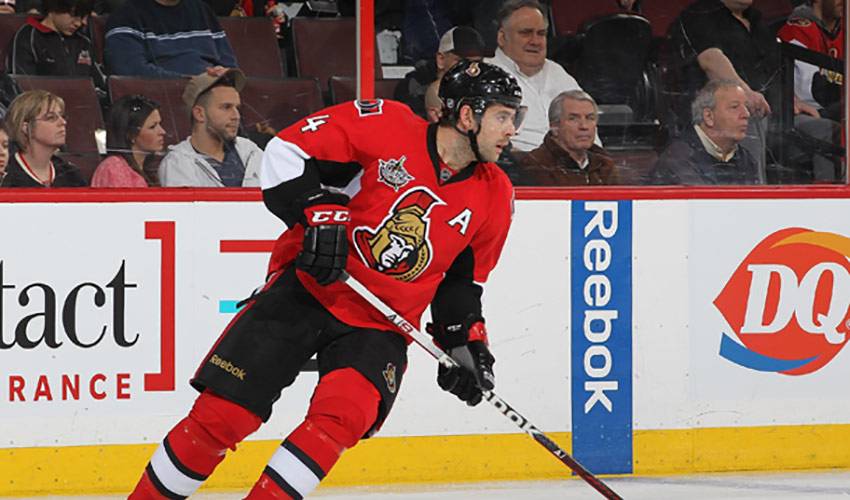 He hasn't experienced his own milestone moment yet, but it's definitely on the radar for respected veteran Chris Phillips.

It was April 6, 2010 when Ottawa captain Daniel Alfredsson was feted for playing in his 1,000th regular season NHL game, a milestone which is recognized by the NHLPA.

Phillips, who is zeroing in on the same mark, remembers vividly what he was thinking about the evening Alfredsson's feat was celebrated.

“Just to see how special it was, to see his reaction and how the fans responded, it's something you don't forget,” said Phillips, of his teammate, who holds the Senators' franchise records for goals, assists, points and games played. “It was a great celebration to be part of.”

The 33-year-old Phillips is drawing ever closer himself to receiving the same fanfare.

Prior to the start of the 2011-12 campaign, the first overall selection in the 1996 NHL Entry Draft, had appeared in 945 regular season games. He has only missed one game in the past five seasons.

“It would be great if I were to hit it this year,” said Phillips, who made his NHL debut in the 1997-98 season, when he appeared in 72 games with Ottawa, scoring five goals and 16 points, helping the club finish above .500 for the first time in team history. “To be able to do it with one organization is something very special to me. That happens less and less these days and to see Daniel do it in the same way is great.”{{QUOTE}}

The former Western Hockey League standout, who won the Jim Piggott Memorial Trophy (Rookie of the Year) in 1996 and the Bill Hunter Memorial Trophy (Top Defenceman) in 1997, is hoping he still has plenty of more games to play.

“That's certainly what I'd love to do,” said Phillips, who won two gold medals with Canada, at the 1996 and 1997 World Junior Championships. “When you first start out, you don't know really quite what to expect in terms of how long you'll play. But I've really enjoyed it here.”

Phillips, who played for Prince Albert and Lethbridge during his WHL tenure, has fond recollections of his early days in Ottawa.

“It was a perfect situation for me,” recalled Phillips, who had two assists in his first NHL playoff experience, as Ottawa upset the New Jersey Devils in the first round, before falling to the Washington Capitals in the second round of the 1998 Stanley Cup Playoffs. “I was able to learn a lot from guys like (defencemen) Lance Pitlick and Sean Hill. To have their veteran input, it meant a lot. Not only were they good at their roles, they were also good people, fun to be around. That's exactly what you're looking for when you start out.”

Phillips also points to former teammate Wade Redden as a key figure in his on and off ice development.

“Wade made it very easy for me to adapt,” said Phillips, of his fellow defenceman. “He really helped me with the little things, answering questions and just listening, that goes a long way in making you feel comfortable and confident.”

It's something Phillips has been able to use in his role as alternate captain, as the Senators, who are viewed as an outsider to nab an Eastern Conference playoff spot, look to surprise their rivals in 2011-12.

Despite their longshot status, Phillips, who played in Sweden with Brynas during the 2004-05 NHL lockout, and his teammates are looking to give their fans something to cheer about.

“We want to play the type of hockey that makes us a hard team to go up against and a team that shows up every night,” said Phillips, who has appeared in 97 NHL post-season games, scoring six times while adding seven assists. “There are no easy games in this league, so what we need to do is just focus in on the next game.”

There is one game in particular, though, that Phillips is looking forward to skating in.

“I guess if I stay healthy that this will be the season that I reach 1,000 games,” said the 6'3”, 215-pounder. “I suppose as it gets closer, I'll be more excited about it. As I said before, you don't know what really lies ahead when it comes to your career. Then, all of a sudden, you've gone from a rookie to a veteran. It's been wonderful and hopefully, there are still lots of good things to come.”