Gerbe and Sabres Sharp for Playoffs 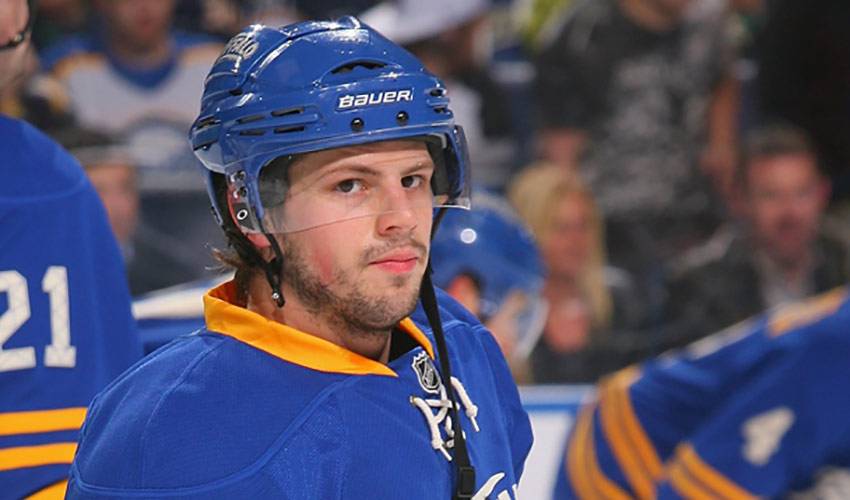 He's a player with plenty of offensive punch, but posting points isn't what Nathan Gerbe's most proud of when it comes to his game.

There's no doubt that Gerbe, in his first full NHL season, is a capable point-producing forward. Seeing his No. 42 on the scoresheet, he admits, is nice, but keeping the opposition off it, he insists, is equally gratifying.

“I think for any player, being able to be counted on at both ends of the ice is something you strive for,” said Gerbe, who played for the Boston College Eagles of the Hockey East conference in the NCAA and was selected by the Buffalo Sabres with the 142nd pick in the 2005 NHL Entry Draft. “That's one thing that I really wanted to do right from the start of the season. If I could provide offence and also play sound defence, I hoped that could help the team be successful.”

The beginning of Gerbe's season, at least offensively speaking, was not what he had envisioned.

Gerbe, the man who scored five goals in the final two games of the NCAA 2008 Frozen Four tournament, the one who led his team to the championship, and was named the tournament's most outstanding player, went goalless in his first 20 games.

The Sabres struggled, too, leaving them plenty of work to do to get into the Eastern Conference playoff hunt.

“We didn't have a great start and for the last 25 games of the regular season we were playing playoff hockey,” said Gerbe, who was a finalist for the Hobey Baker Award as U.S. college hockey's most valuable player in 2007–08. “But in the second half, I think we showed who we really are. We stuck with it.”

At the completion of the regular season, the Michigan native had 16 goals and 31 points in 64 games.

It was his performance against the Philadelphia Flyers in early April that defined Gerbe's second half surge.

Gerbe scored twice and Tomas Vanek netted the overtime winner as Buffalo downed the Flyers 4-3 at HSBC Arena, helping secure a post-season berth for the Sabres.

But it wasn't just that Gerbe potted a pair of tallies, it was how he accomplished the feat.

Trailing 3-2, Gerbe skated down the right wing and stopped inside the right circle. He then lifted a spinning backhander that found its way through traffic and just under the crossbar to knot the game.

“I was just hoping that it would find its way into the net,” recalled Gerbe, of the goal that was aired on several sports highlight shows and across the Internet. “I want to be someone that can score key goals.”

Gerbe is also quick to point out the efforts of his Buffalo teammates.

When Ryan Miler, one of the game's most high-profile goaltenders, went down to injury, his backup, Jhonas Enroth, provided the Sabres with stellar play between the pipes.

“I think everyone knows just how good Ryan is,” said Gerbe, who scored his first career goal on December 9, 2009 against the Washington Capitals. “But for Jhonas to come in and play the way he has, it's been amazing. He answered the bell. We also have another guy in Patrick Lalime that we can count on, too. You could see everyone raising their game as the season went on.”

“We've got a great mix of guys on this team,” said the centreman, who scored his first playoff goal against the Boston Bruins on April 26, 2010. “You see the way everyone is committed to being strong at both ends of the rink. That's what I want to do. You want to be known as a two-way player.”

Sometimes, though, it's impossible for Gerbe to escape his reputation as a scorer.

On January 21, 2011, he scored two goals in five seconds against the New York Islanders, setting a franchise record for the fastest two goals by one player.

Was he excited at the prospect of getting Rick Jeanneret, the Sabres' energetic longtime television and radio play-by-play announcer, out of his seat twice in rapid succession?

“I was just trying to catch him off guard,” laughed Gerbe.

Now, Gerbe will be looking for some more offensive magic, as well as providing tight defence, against the Flyers in their first-round playoff encounter.

He's also looking forward to seeing the Buffalo faithful on their feet during their series.

“I love it here,” said Gerbe. “I really do. We have great support. I think our fans appreciate hard work.”

And in Gerbe's case, they don't mind the odd highlight of the night, either.