Blue-collar defenceman willing to do what it takes for team success; quietly effective for Western Conference team 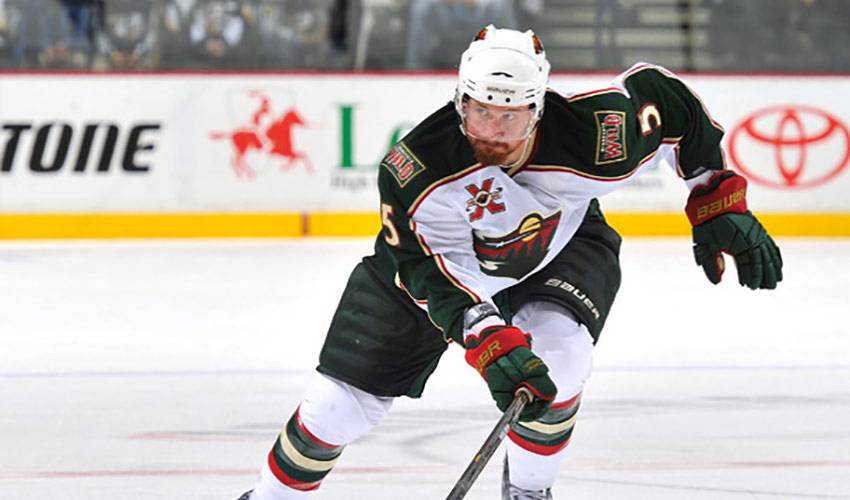 's contributions to the Minnesota Wild's success story. But, ironically enough, the defenceman thinks he's at his best when you don't notice him at all.Greg ZanonThere are plenty of reasons to take note of

For over 400 National Hockey League games, Zanon, in his third season on the Wild blue line, has carved out a solid career doing the so-called little things that have the ability to create a big impact on the outcome of a game.

The 31-year-old native of Burnaby, British Columbia, is the prototypical defender, one who relishes the role of neutralizing the opposition.

“A good game for me, I guess, would be that you didn't notice me out there at all,” offered Zanon, who was selected in the fifth round, 156th overall, in the 2000 NHL Entry Draft by the Ottawa Senators, but never played for the Eastern Conference team. “For my style, it's really about being dependable in my own zone, making crisp passes and blocking a few shots. The less you notice me…that would translate into me having a good game.” {{QUOTE}}

When you talk of Zanon, it's a must to discuss his shot-blocking exploits. The 2010-11 NHL campaign is a perfect example of that aspect of his game.

He ranked second in NHL with 212 blocked shots (second highest total of career, blocked his 1,000th career shot in late March and blocked a season-high seven shots in early February.

Even more impressive? Zanon, despite throwing his body in front of hundreds of pucks, appeared in all 82 games.

“It's part of my game and I take a lot of pride in it,” said Zanon, who signed as a free agent with the Predators on July 9, 2004, before signing as a free agent with Minnesota on July 1, 2009. “It all comes down to doing whatever you have to in taking away a scoring chance.”

He's been injured standing or sliding in front of shots before, but the 5'11”, 200-pounder isn't gun-shy about diminishing that aspect of his repertoire.

Zanon, who has just 11 games of NHL playoff experience, all with the Predators, just wants to win.

“We had some early struggles this year, but we've been playing with intensity and confidence,” said the defenceman, who has missed part of the campaign due to injury. “But I think we're continuing to move in the direction we want and you can feel that type of attitude in the room. We took it upon ourselves to start the year strong and maintain that consistency. There is a belief in what we can do as individuals and in one another.”

While a loss to a conference or divisional rival might have taken longer to get over last season, it's not an issue in 2011-12.

“We know that every point does count,” said Zanon, who played collegiately at Nebraska-Omaha. “There is no time to dwell on a bad game. You get back on your horse and make sure the next game you play is your best. We go into each game feeling as though we can them.”

It's something first-year Wild bench boss Mike Yeo preached to the players well before their first regular season game.

“There was a new system we needed to learn and we've done that,” noted Zanon, who won an American Hockey League Calder Cup with Milwaukee in 2004, and was a Calder Cup finalist in 2006 with the Admirals. “You could see the excitement in training camp and how the team was starting to gel at that point in time. We wanted to carry that momentum into the regular season.”

Looking beyond the regular season, or even their next few games, isn't something he and his teammates are willing to do.

“Last year was a perfect example of just how hard it is to make it into the playoffs,” said Zanon, who made his NHL debut against the Wild on December 1, 2005. “I don't think you can too far ahead in this league. You don't want to play yourself out of a spot early, but you also can't start looking down the road. There are too many good teams in both conferences.”

Zanon made a point of being well-prepared for this campaign, starting with his off-season training.

“Really, it was just about being in top shape and getting geared up for camp,” offered Zanon. “I wanted to make a good first impression to the coaching staff and be ready to learn the new system that was going to be put in place. I wanted to do whatever I could to make it a good year for us.”

A perennial top-10 resident when it comes to blocked shots, Zanon is hoping the Wild are on course to take their shot at a Stanley Cup championship.

And while you might not notice No. 5 throughout the course of the game, Zanon won't take any offence. After all, that would mean he's done his job.