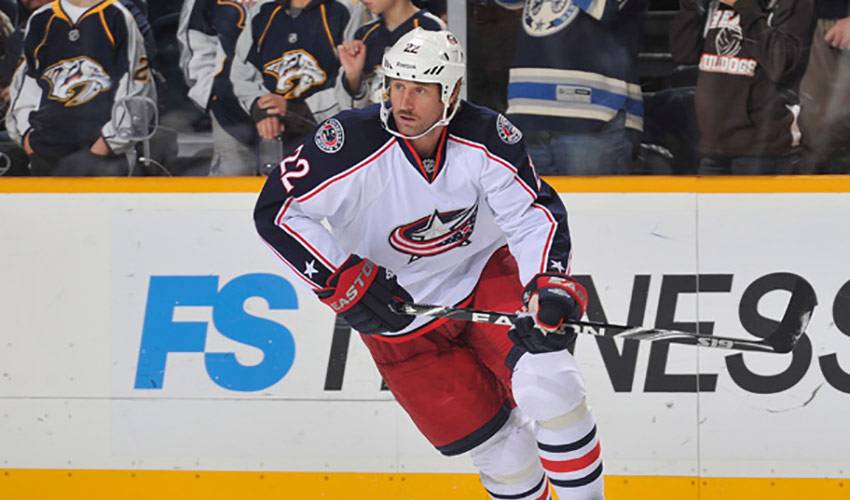 never anticipated, but as he passes a major career milestone, he is certainly glad he chose to pursue it.Vaclav ProspalHis hockey journey, one that began in his native Czech Republic and one that is still going strong in North America, is something

Just days removed from his milestone 1,000th NHL game, an accomplishment recognized by the NHLPA, the man who came to be known as ‘Vinny' to his teammates, is still taken aback by the accomplishment.

“If you would have told me when I was 18-years-old, on the plane from Czech Republic to North America, that I would play 1,000 games in the NHL, I wouldn't have believed you,” said the left-winger, who launched his big-league career in 1996-97 with the Philadelphia Flyers. “In fact, I wouldn't have understood you because my English wasn't that great back then.”{{QUOTE}}

While his ability to communicate with his fellow players might have taken some time to develop, there was no doubting the abilities that Prospal, the 73rd overall pick of the Flyers in the 1993 NHL Entry Draft, brought with him to the NHL.

Intelligent with or without the puck, a strong skater, scorer and playmaker, Prospal was a welcome addition to the Philadelphia lineup, a team that featured some of hockey's top stars.

For a young player, it was an ideal situation.

“When I came to play with the Flyers, I didn't know how it would turn out,” recalled Prospal, who played four seasons with Philadelphia's American Hockey League affiliates from 1993-97. “But when I got to play there, it was great. (Former NHLPA member) Rod Brind'Amour was someone I played with a lot. As a rookie, I looked up to him. He's a very intelligent player and person. He showed me quite a bit about the game.”

“Eric Desjardins, John Leclair, Eric Lindros…great players and people who really made feel welcome and comfortable,” noted Prospal, who had 15 points in 18 games in 1996-97 with Philadelphia. “It couldn't have been a better situation for me.”

Now patrolling the wing for the Columbus Blue Jackets, Prospal, 36, is still enjoying the game as much as he ever did.

That said, the man who has played for the Anaheim Ducks, Florida Panthers, Ottawa Senators, Tampa Bay Lightning, Flyers and Blue Jackets admits his milestone has brought out a range of emotions.

“Believe me, I enjoy playing the game I love, but when you reach a moment like this, it's sad in some ways knowing that you won't be playing as long as you'd like to,” said Prospal, who played for his hometown team HC ?eské Bud?jovice, leading them in scoring and helping the team return to the Czech Extraliga during the 2004-05 NHL lockout.

“You just want to make the most of it. I'm still playing and I'm still happy.

“There will always be ups and downs, times when things are going great and times when they don't go your way.”

Last season and the current one are perfect examples of what Prospal speaks of.

A knee injury limited him to just 29 games in 2010-11 when he was with the Rangers. There was talk it could end his career, but Prospal persevered, eventually signing a one-year contract with the Blue Jackets in July.

“Vinny Prospal is a proven top six forward in the National Hockey League and we look forward to him playing that role for our hockey club,” said Executive Vice President of Hockey Operations and General Manager Scott Howson. “We are very pleased to be able to add a player of his caliber to our team at this late date in the free agency process.”

How has Prospal responded with his new team? He's playing at an almost point-per-game clip with Columbus.

“I'm proud of how long I have played, 19 years in North America, when you add the time I played in the minors, but I'm also proud that I was able to come back from my injury,” said Prospal, who has appeared in the Stanley Cup Playoffs nine times. “But I am also proud of other things, too. I am a father to three beautiful children and a husband to a wonderful wife.”

Prospal, who has represented his country in international competition on several occasions, including at the 2006 Olympic Games in Turin, Italy, the 2004 and 2005 World Championships, winning the gold medal in 2005, and in the 2004 World Cup of Hockey tournament, is hoping there are even more good times to come.

“It's totally different from when I first started,” he noted. “I was the youngest guy and now it is the other way. I am happy to give my teammates advice, not vocal, but in the way I take care of myself and how I play.”

Call him an ageless wonder, a classy veteran or a resilient athlete – each one is an accurate description of Prospal.

“You appreciate what you have,” he said. “I've been very lucky.”

The man known as Vinny has also been good. Very good, indeed.