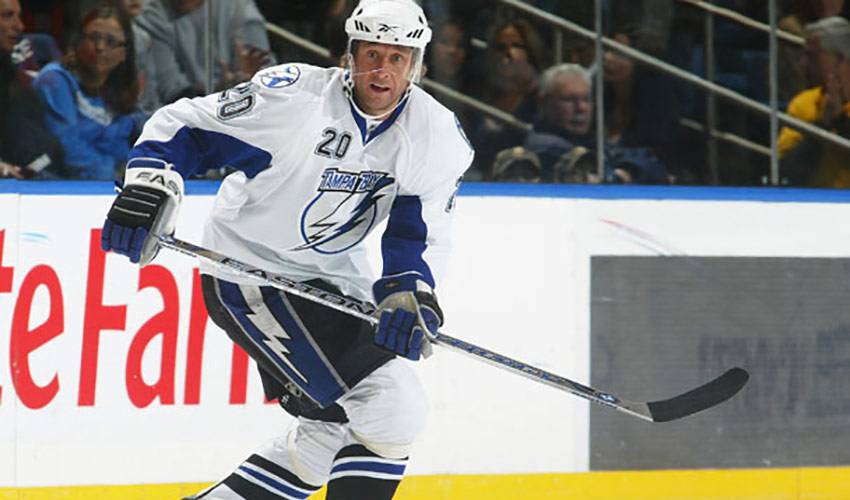 He was drafted 71st overall by the Philadelphia Flyers in the 1993 NHL Entry Draft.

In his career, Vinny recorded five 20-goal seasons and more than 50 points on nine occasions. He also scored 34 game-winning goals, while in the postseason he tallied 10 goals and 35 points in 65 playoff games. He scored his first career NHL goal on March 8, 1997 while with the Flyers, and he enjoyed his best season offensively with the Lightning where he scored a career-high 80 points in 2005-06. In his final NHL season, 2012-13, he led the Blue Jackets in scoring with 30 points in the lockout-shortened campaign.

Internationally, in addition to his NHL accomplishments, Vinny helped the Czech Republic win the gold medal twice at the World Championship (2000, 2005), which included scoring the game-winning goal in the gold medal game in 2005. He was also a part of the Olympic bronze medal team (2006) in Torino, Italy. Vinny played for his country on two occasions in the World Junior Championships (1993-94, 1994-95), once in the World Cup of Hockey (2004) and a total of three times in the World Championship (2000, 2004, 2005). He was named to his country’s 1998 Olympic team that won the Gold Medal in Nagano, but was unable to participate due to injury.

“I want to thank my teammates and coaches who helped me enjoy a 20-year professional hockey career when very few thought I would play even one NHL game,” said Vinny Prospal. “I sincerely want to thank the fans who have been so good to me, treating me with such kindness and respect, for the 20 years I have played here in North America in both the NHL and the AHL. Playing in the NHL was a dream. To play at the highest level for 16 years, with the best players in the world is something I will cherish for the rest of my life. I appreciate also the support, guidance and encouragement I received from my agent, Ritch Winter over the 22 years we worked together, as well as Ritch’s partner, the late Miro Henys. Ritch and Miro believed in me when many others did not. I can’t thank them enough. I especially want to thank my parents for their love and support since the very beginning and their guidance in the early years.

“I loved playing hockey, I loved scoring goals and I loved being a part of the NHL for so many years. That said, within minutes of me stepping on the ice for practice last week in Abbotsford, I knew that I wanted to focus on something that was more important than hockey, my family. I love my wife and I love my children. Having spent much of the last 10 months with them waiting for a call to return to the ice, I know now that I would rather be with them at home helping and supporting my wife and being with my kids than playing the game I love so much. When I got on the ice with the Abbotsford Heat last Thursday, it was clear to me that I did not have the desire to play at the level I have come to expect of myself anymore. And to not be able to give everything needed would be to disrespect the game that has been so good to me. I am going to focus all my time and attention now on being a good father and a husband. Because, in the end, my family is and will always be my greatest accomplishment.

“I want to thank all of the teams I have played with for having the faith in me they did. I especially want to thank the Vancouver Canucks, with whom I have never played a game for, and my coach and friend, John Tortorella, for helping me have closure that would not have occurred had they not extended to me the opportunity they did last week. I appreciate Torts and the Canucks for their faith in me and am sorry I will not be reunited with one of the most influential people in my life in Torts as we had planned.”

Vinny, his wife Monika and their three children, Vinny Jr., Veronika and Vanessa will reside in Tampa.