Passing On The Lessons Learned

Matt Cullen has gone from a rookie to 1,000 games in the blink of an eye & is now a key veteran voice in Minnesota 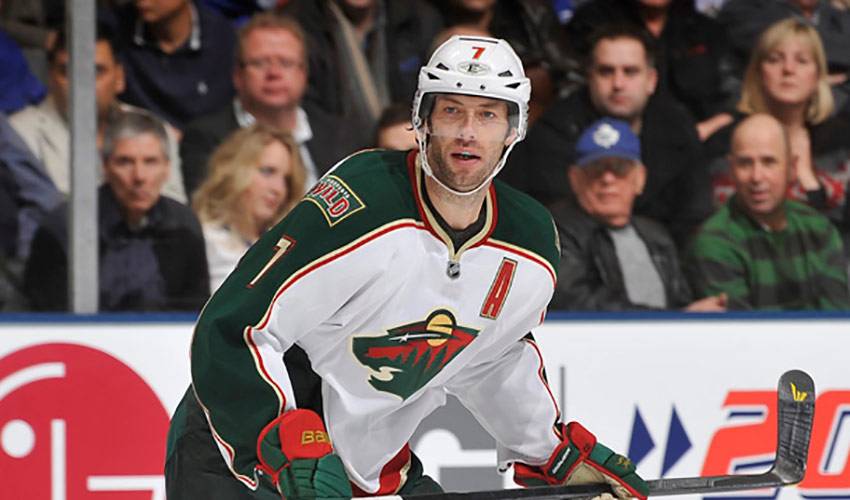 For a player whose goal was to simply make it to the NHL, Matt Cullen, who recently skated in his 1,000th big-league game, has gone far beyond what he ever could have imagined.

Some 17 years ago when he was still playing high school hockey in his home state of Minnesota, Cullen, then in his final year at Moorhead High, was hopeful he'd catch the eye of an NHL team.

One year later, when he had scored 41 points in 39 games for St. Cloud University, also in Minnesota, Cullen got his wish when the Mighty Ducks of Anaheim selected him 35th overall in the 1996 NHL Entry Draft.

Now, 15 years after his rookie campaign in 1997-98, Cullen recently became the latest NHLPA member to reach the 1,000-game plateau (on January 10), an accomplishment he still finds hard to believe.

“It's really quite unbelievable how it's turned out,” said Cullen, who spoke with NHLPA.com on the road before their game against Western Conference rival, the Chicago Blackhawks. “The dream was to get to the NHL, make the team and go from there. You really don't what to expect when you start out. You want to make it and then you want to stick.”

And stick Cullen did.

But he never quite expected it to be as prosperous as it has been.{{QUOTE}}

Did he think he would win a Stanley Cup with Carolina in 2004? Did he imagine leading the Italian League in scoring during the NHL lockout in 2004-05? Could he ever have envisioned playing for his home state team, then scoring a regulation goal, along with the shootout winner, in his 1,000th game?

“Absolutely not,” laughed Cullen, who has played for Anaheim, Florida, Carolina (twice), New York Rangers, Ottawa and Minnesota during his time in the NHL. “It's a good point, in that you really aren't afforded the opportunity to sit back and realize all of the good things that have happened. When you're in the middle of the season, going through all the day-to-day stuff, it's impossible to look beyond the next game.

“But I'm so fortunate and grateful to be in the position I am. There have been ups and downs throughout, but I wouldn't trade any of it. I'm so appreciative for all of it.”

Ironically, Cullen, who has appeared in 63 NHL playoff games, sees his most recent accomplishment as a team effort.

“When I think back to all the people who helped me for no reason, it's quite humbling,” said the forward, who scored 25 goals for the Hurricanes in 2005-06. “I always had people looking out for me. I couldn't have reached 1,000 games without their support.”

Cullen points to several former NHLPA members and a current standout as key figures in his career.

“When I was with Anaheim, Ted Drury was so good to me,” recalled Cullen, who posted 27 points in 61 games with the Ducks in 1997-98. “He was a veteran guy who went out of his way to make sure I felt comfortable. Paul Kariya and Teemu Selanne also made me feel welcome.

Here you are, as a young kid in awe of these guys, and they have no egos. They just want to help you. Bret Hedican and Rod Brind'Amour also come to mind. So too does (current Pittsburgh head coach) Dan Bylsma. He had such a good perspective on the game. I just feel lucky to have been around quality people and players.”

Now, it's Cullen who is in the veteran role, a position he takes great satisfaction from.

“One minute you're the rookie and in the blink of an eye, here I am, the oldest guy on the team,” he offered. “Most of my career, I was nice and safe and in the middle, in terms of age. Now, at 35, I'm the oldest. It's kind of funny and I do get the odd teasing, but I'm happy to be there for my teammates.”

And Cullen still has plenty of reasons to be happy, namely, in knowing that his 1,000th game experience isn't quite over yet.

“When we get back to Minnesota after our road trip, the team has set up a little ceremony on January 21,” offered Cullen, who'll have plenty of family and friends in the stands that night. “I guess they didn't want to jinx me on the actual night I got to 1,000 games. I'm really looking forward to it.”