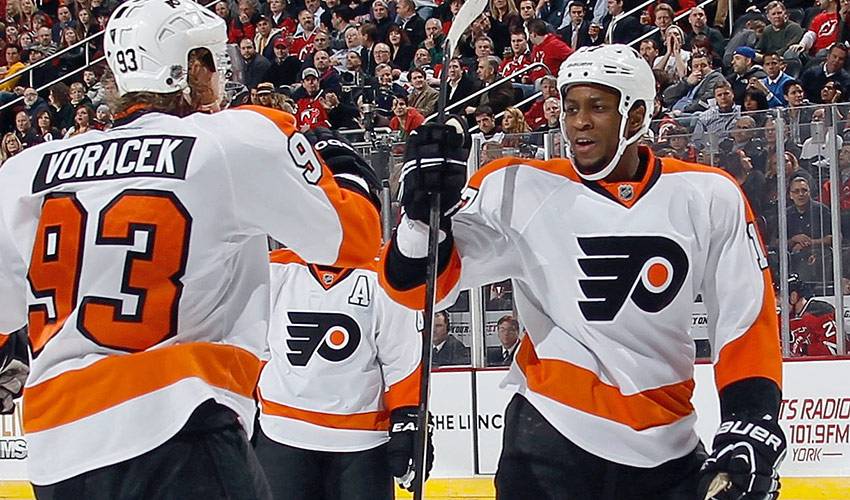 Before the first question was asked, Terry Halpenny made his intentions crystal clear: “I have lots to say about Wayne Simmonds, but every single thing will be positive.”

It was about eight years ago when Halpenny, a senior advisor for the Brockville Braves, along with the head coach of the Canadian Junior Hockey League team, made the three-hour trek to Toronto to scout players with the hope of recruiting a handful to join their team. The original plan was to convince four. The end result was one. “I still remember those exact words I jotted down when I saw this kid out there,” recalled Halpenny, of his first impression of the wiry teenager that seemed impossible to knock down. “I wrote, ‘special player…intense…extremely strong on his skates.’ You just couldn’t help but notice him.” Others soon took notice of Simmonds when he suited up for Brockville in 2005-06. In 49 games, the right-winger produced 24 goals and 43 points. But he wasn’t merely an offensive presence. Simmonds racked up 127 penalty minutes, a testament to his testy nature, a quality that endeared him to his teammates, coaches and fans. That on-ice intensity, however, was tempered by a quiet, soft-spoken demeanor outside of the arena. “Without a word of a lie, I see him as a son,” said Halpenny, who had Simmonds stay at his family home during his one campaign in Brockville. “My wife does, too. He never missed a curfew once. He was never a minute late. He was thoughtful of everyone he met. He was popular among his teammates. And could he ever play the game.” Hitting. Scoring. Dropping the gloves. Simmonds brought an abundance of skill sets to the ice. There was one element of his game, though, that Halpenny knew needed some attention. “We knew he’d have to adjust his skating style,” he recalled. “It looked, at first, like he was almost running when he was out there. But, no surprise, Wayne worked hard and his skating improved in no time. All that did was just add another strong part to his game.” The Los Angeles Kings liked what they saw in Simmonds, drafting him 61st overall in 2007, after his first Ontario Hockey League season in which he tallied 49 points in 66 games with the Owen Sound Attack. Simmonds appeared in every game for the Kings in 2008-09, contributing 23 points. The following campaign his production jumped to 40 points. Following a 14-goal season in 2010-11, he was traded to the Philadelphia Flyers, along with Brayden Schenn and a 2012 second-round pick, for Mike Richards and Rob Bordson on June 23, 2011. Simmonds responded with a 28-goal campaign in his first year in Philly, establishing himself as one of the team’s most dependable and consistent forwards. This season, he’s been even more impressive. After 27 games, Simmonds has 10 goals and 10 assists. It comes as no surprise to Halpenny. “His talent is undeniable,” he offered. “I knew that from the first time I saw him on the ice. He’s tough as nails and plays hard every time he’s out there.” Simmonds, the person, is equally deserving of praise. “I think of his humble nature and his loyalty to those closest to him,” noted Halpenny. “Every thing I will ever say about Wayne will be positive.” Halpenny is hardly alone in that assessment. “He’s one of those guys you want on your side,” said teammate and linemate Daniel Briere. “He’s intense and emotional. He scores and he fights. That’s what makes him fun to play with. He can do everything. Those guys are tough to find, but are the ones everybody wants.” You don’t need to tell Terry Halpenny. It took him all of a few seconds to figure that out.