The National Hockey League Players’ Association (NHLPA) today announced Sidney Crosby as the recipient of the 2012-13 Ted Lindsay Award, presented annually to the “Most Outstanding Player” in the NHL as voted by fellow members of the NHLPA.

TORONTO (June 15, 2013) – The National Hockey League Players’ Association (NHLPA) today announced Sidney Crosby as the recipient of the 2012-13 Ted Lindsay Award, presented annually to the “Most Outstanding Player” in the NHL as voted by fellow members of the NHLPA.

Alex Ovechkin of the Washington Capitals and right wing Martin St. Louis of the Tampa Bay Lightning were also nominated by their fellow players as finalists for the 2012-13 Ted Lindsay Award.

“I would like to thank the NHL Players’ Association for recognizing me for this award,” said Sidney Crosby, the 2012-13 Ted Lindsay Award recipient. “It means a lot to be recognized by the guys that you compete against each and every night.”

“The players know who they're voting for. This is very well deserved for Sidney." said Ted Lindsay, Hockey Hall of Fame player, and namesake to the award. "Sidney comes to play every night and he's a great team player. It's a wonderful honour for my name to be associated with his winning it. I would also like to congratulate Alex and Martin on their deserving nominations." 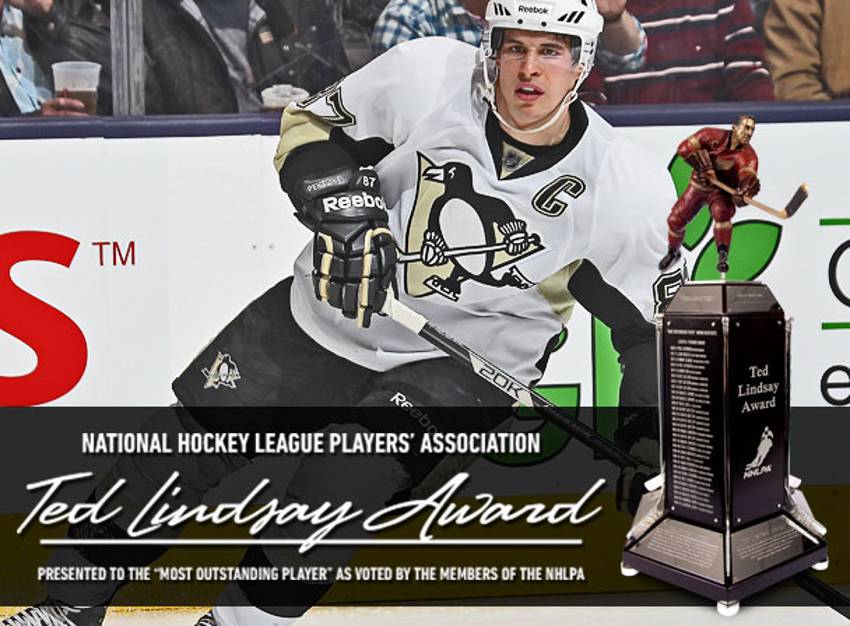 As part of the 2013 NHL Awards television broadcast that aired prior to Game 2 of the Stanley Cup Final in Chicago, the Ted Lindsay Award was presented along with the Calder Memorial Trophy, Hart Memorial Trophy, James Norris Trophy and Vezina Trophy.

Crosby helped lead the Penguins to a first place finish in the Eastern Conference in the 2012-13 regular season. He ranked tied for third in the league in points (56), second in assists (41), fourth in plus-minus (+26), and first in points per game (1.56).

In the history of the Award, four different Penguins players have been voted the “Most Outstanding Player” for a combined nine times. Crosby’s teammate Evgeni Malkin received the Ted Lindsay Award last season, while former Penguins forward Mario Lemieux received the Award four times (1985-86, 1987-88, 1992-93, 1995-96), and forward Jaromir Jagr received the Award twice while playing for the Penguins (1998-99, 1999-00).

Draft: Selected 1st Round, 1st Overall by the Pittsburgh Penguins in 2005 Entry Draft